a) both Sc3+ and Zn2+ ions are colourless and form white compounds.

b) in case of Sc, 3d orbital are partially filled but in Zn these are completely filled

d) both Sc and Zn do not exhibit variable oxidation states

d) none of these

3. Among the transition metals of 3d series, the one that has highest negative ( M2+ /M) standard electrode potential is

4. Which one of the following ions has the same number of unpaired electrons as present in V3+?

5. The magnetic moment of Mn2+ ion is

6. Which of the following compounds is colourless?

7. the catalytic behaviour of transition metals and their compounds is ascribed mainly due to

a) their magnetic behaviour

b) their unfilled d orbitals

8. The correct order of increasing oxidizing power in the series

greater the oxidation state, higher is the xidizing power

9. The alloy of copper that contain Zinc is

10. Which of the following does not give oxygen on heating? 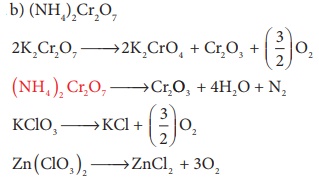 12. Which of the following statements is not true?

a) on passing H2S, through acidified K2Cr2O7 solution, a milky colour is observed.

b) Na2Cr2O7 is preferred over K2Cr2O7 in volumetric analysis

c) K2Cr2O7 solution in acidic medium is orange in colour

d) K2Cr2O7 solution becomes yellow on increasing the PH beyond 7

14. A white crystalline salt (A) react with dilute HCl to liberate a suffocating gas (B) and also forms a yellow precipitate . The gas (B) turns potassium dichromate acidified with dil H2SO4 to a green coloured solution(C). A,B and C are respectively

16. How many moles of I2 are liberated when 1 mole of potassium dichromate react with potassium iodide?

17. The number of moles of acidified KMnO4 required to oxidize 1 mole of ferrous oxalate(FeC2O4) is 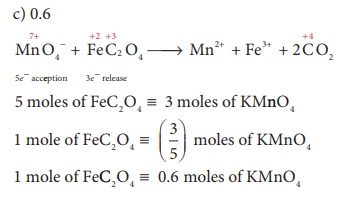 19. Which one of the following statements related to lanthanons is incorrect?

b) The basicity decreases as the ionic radius decreases from Pr to Lu.

c) All the lanthanons are much more reactive than aluminium.

As we move from La to Lu , their metallic behaviour because almost similar to that of aluminium.

20. Which of the following lanthanoid ions is diamagnetic?

21. Which of the following oxidation states is most common among the lanthanoids?

22. Assertion : Ce4+ is used as an oxidizing agent in volumetric analysis.

Reason: Ce4+ has the tendency of attaining +3 oxidation state.

a) Both assertion and reason are true and reason is the correct explanation of assertion.

b) Both assertion and reason are true but reason is not the correct explanation of assertion.

c) Assertion is true but reason is false.

d) Both assertion and reason are false.

23. The most common oxidation state of actinoids is

24. The actinoid elements which show the highest oxidation state of +7 are

25. Which one of the following is not correct?

b) In lanthanoid series ionic radius of Ln3+ ions decreases

2. Which of the following ions of salt is white in colour?

3. For the four successive transition elements (Cr, Mn, Fe & Co) the stability of +2 oxidation state will be there in which of the following order?

a) All Cr - O bonds are equivalent

b) 6Cr - O bonds are equivalent

d) No bonds in Cr2O2−7 are equivalent

5. The transition element which has only +3 oxidation state is