1.     What are transition metals? Give four examples.

3.     What are inner transition elements?

4.     Justify the position of lanthanides and actinides in the periodic table.

The actual position of Lanthanides in the periodic table is at group number 3 and period number 6.

Therefore these elements are grouped together and placed at the bottom of the periodic table.

2. The common oxidation state is +3

3. All these elements have similar physical and chemical properties.

The fourteen elements following actinium resemble in their physical and chemical properties.

5.     What are actinides? Give three examples.

The elements in which the extra electrons enters 5f orbitals are called actinides.

Gd3+ exhibits exactly half filled 4f orbital. There is no electron in its outer d orbital. Hence it is colourless.

Cu2+ has partially filled d orbital and d-d transition is possible. Hence compounds of Cu2+ are coloured but those of Zn2+ are colourless.

8.        Describe the preparation of potassium dichromate.

i) Chromite into sodium chromate:

Potassium dichromate is prepared from chromite ore. Chromite ore is concentrated by gravity separation. It is then mixed with excess sodium carbonate and lime and roasted in a reverbratory furnace.

The above solution is concentrated and cooled.

The saturated solution of sodium dichromate in water is mixed with KCl and filtered. The filtrate is cooled to obtain K2Cr2O7.

Across 4f series, Due to imperfect shielding of 4f orbital the atomic and ionic radii of lanthanides show gradual decrease with increase in atomic number. This decrease in ionic size is called lanthanide contraction.

The 4f sub shell have a diffused shapes and therefore the shielding effect of 4f elelctrons relatively poor.

Hence, with increase of nuclear charge, the valence shell is pulled slightly towards nucleus.

As a result, the effective nuclear charge experienced by the 4f elelctorns increases and the size of Ln3+ ions decreases.

Due to small change in radii of lanthanides, their chemical properties are quite similar. 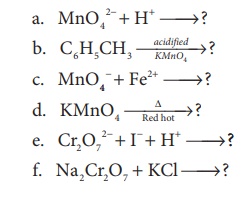 An interstitial compound is a compound that is formed when small atoms like hydrogen, boron, carbon or nitrogen are trapped in the interstitial holes in a metal lattice.

They are usually non-stoichiometric compounds. Transition metals form a number of interstitial compounds such as TiC, ZrH1.92, Mn4N

12. Calculate the number of unpaired electrons in Ti3+ , Mn2+ and calculate the spin only magnetic moment.

13. Write the electronic configuration of Ce4+ and Co2+.

14. Explain briefly how +2 states becomes more and more stable in the first half of the first row transition elements with increasing atomic number.

In the first half, the 3d orbitals get occupied gradually as the atomic number increases. Since, the number of empty d-orbitals decreases the stability of the cations increases. The Mn2+ ion is most stable as all the five 3d - orbitals are singly occupied.

• The standard electrode potential for the M3+/M2+ half-cell gives the relative stability between M3+ and M2+.

• The negative values for titanium, vanadium and chromium indicate that the higher oxidation state is preferred. To reduce a stable Cr3+ ion, strong reducing agent which has high negative value for reduction potential like metallic zinc ( E° = − 0.76 V) is required.

• The high reduction potential of Mn3+/ Mn2+ indicates Mn2+ is more stable than Mn3+. For Fe3+/Fe2+. the reduction potential is 0.77V, and this low value indicates that both Fe3+ and Fe2+ can exist under normal conditions. The drop from Mn to Fe is due to the electronic structure of the ions concerned. Mn3+ has a 3d4 configuration while that of Mn2+ is 3d5. The extra stability associated with a half filled d sub shell makes the reduction of Mn3+ very feasible (E° = +1.51 V)

5. Most of the lanthanoides are colourless

6. They do not form oxo cations

8. Except promethium, they are non-radioactive

8. All of them are radioactive

Mn3+ gains one electron and converts to stable half filled Mn2+.

Cr2+ loses one electron and converts to Cr3+

Cr3+ ion has extra stability due to presence of half filled t2g orbital. Hence it is strong reducing agent.

19. Compare the ionization enthalpies of first series of the transition elements.

• Ionization energy of transition element is intermediate between those of s and p block elements.

• As we move from left to right the ionization enthalpy increases which is due to increase in nuclear charge corresponding to the filling of d-electrons.

• The increase in first ionisation enthalpy with increase in atomic number along a particular series is not regular. The added electron enters (n-l)d orbital and the inner electrons act as a shield and decrease the effect of nuclear charge on valence ns electrons. Therefore, it leads to variation in the ionization energy values.

• The ionisation enthalpy values can be used to predict the thermodynamic stability of their compounds.

In actinoides, 5f orbitals are filled. These 5f orbitals have a poorer shielding effect than 4f orbital.

The effective nuclear charge experienced by electrons in valence shows actinoides is much more than that experienced by lanthanoides. Hence the actinoid contraction is greater from element to element than the lanthanide.

La(OH)3 is more basic than Lu(OH)3. As we move from La3+ to Lu3+, the basic character of Ln3+ ions decrease. Due to the small size of Lu3+ ions, the ionic character of Lu - OH bond decreases and covalent character increases which results in the decrease in the basicity.

Half filled or completely filled orbitals are generally more stable.

23. Why do zirconium and Hafnium exhibit similar properties?

If the standard electrode potential (E°), of a metal is large and negative, the metal is a powerful reducing agent, because it loses electrons easily. Cr2+ is stronger reducing agent.

25. The E0M2+ /M value for copper is positive. Suggest a possible reason for this.

• Transition elements exhibit variable oxidation states by loosing electrons from (n−1)d orbital and ns orbital because the energy difference between them is very small.

• The relative stability of different oxidation states of 3d metals is correlated with the extra stability of half filled and fully filled electronic configurations. Example: Mn2+ (3d5) is more stable than Mn4+ (3d3).

28. Which metal in the 3d series exhibits +1 oxidation state most frequently and why?

29. Why first ionization enthalpy of chromium is lower than that of zinc?

• As we move from left to right in a transition metal series, the ionization enthalpy increases, due to increase in nuclear charge Nuclear charge of Zn is greater than Cr.

Across the period melting point first increases as the number of unpaired d electrons available for metallic bonding increases, reach a maximum value and then decreases, as the d electrons pair up and become less available for bonding. For example, in the first series the melting point increases from Scandium (m.pt 1814K) to a maximum of 2183 K for Vanadium, which is close to 2180K for Chromium. However, manganese in 3d series and Tc in 4d series have low melting point. The maximum melting point at about the middle of transition metal series indicates that d5 configuration is favorable for strong interatomic attraction.

1. Compare the stability of Ni4+ and Pt4+ from their ionisation enthalpy values.

• The ionisation enthalpy values can be used to predict the thermodynamic stability of their compounds.

• Let us compare the ionisation energy required to form Ni4+ and Pt4+ ions.

• The energy required to form Pt4+ is less than that of Ni4+. Hence Pt4+ compounds are thermodynamically more stable than Ni4+ compounds.

2. Why iron is more stable in +3 oxidation state than in +2 and the reverse is true for Manganese?

• The stable configuration is observed in Fe3+ and Mn2+. Hence iron is more stable in +3 oxidation state than in +2 and the reverse is true for Manganese