Most of the transition elements are hexagonal close packed, cubic close packed or body centrered cubic which are the characteristics of true metals.

As we move from left to right along the transition metal series, melting point first increases as the number of unpaired d electrons available for metallic bonding increases, reach a maximum value and then decreases, as the d electrons pair up and become less available for bonding.

For example, in the first series the melting point increases from Scandium (m.pt 1814K) to a maximum of 2183 K for vanadium, which is close to 2180K for chromium. However, manganese in 3d series and Tc in 4d series have low melting point. The maximum melting point at about the middle of transition metal series indicates that d5 configuration is favorable for strong interatomic attraction. The following figure shows the trends in melting points of transition elements. 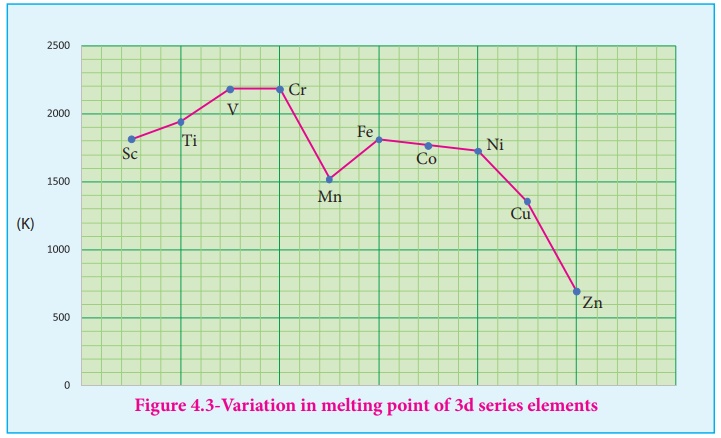 2. Variation of atomic and ionic size: 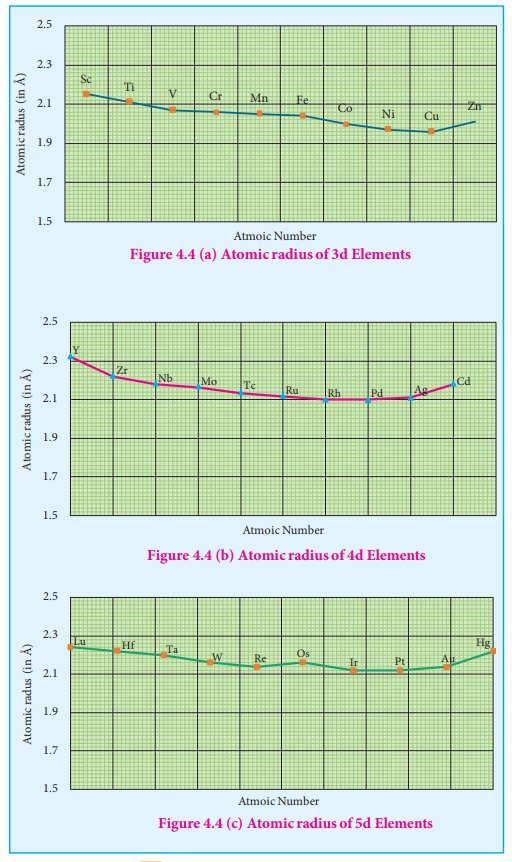 At the end of the series, d-orbitals of Zinc contain 10 electrons in which the repulsive interaction between the charge and hence, the and atomic radius slightly increases. 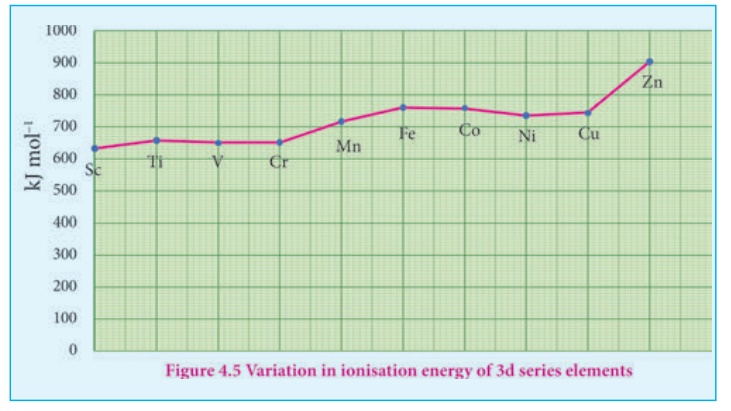 The increase in first ionisation enthalpy with increase in atomic number along a particular series is not regular. The added electron enters (n-1)d orbital and the inner electrons act as a shield and decrease the effect of nuclear charge on valence ns electrons. Therefore, it leads to variation in the ionization energy values.

The ionisation enthalpy values can be used to predict the thermodynamic stability of their compounds. Let us compare the ionisation energy required to form Ni2+ and Pt2+ ions.

Since, the energy required to form Ni2+ is less than that of Pt2+, Ni(II) compounds are thermodynamically more stable than Pt(II) compounds.

The relative stability of different oxidation states of 3d metals is correlated with the extra stability of half filled and fully filled electronic configurations. Example: Mn2+ ( 3d5 ) is more stable than Mn4+ ( 3d3 )

Redox reactions involve transfer of electrons from one reactant to another. Such reactions are always coupled, which means that when one substance is oxidised, another must be reduced. The substance which is oxidised is a reducing agent and the one which is reduced is an oxidizing agent. The oxidizing and reducing power of an element is measured in terms of the standard electrode potentials. 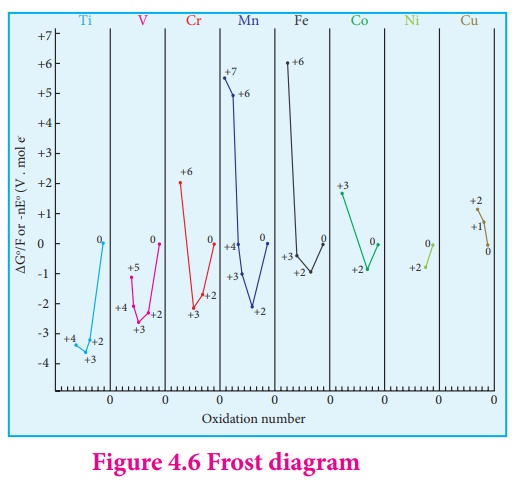 Standard electrode potential is the value of the standard emf of a cell in which molecular hydrogen under standard pressure ( 1atm) and temperature (273K) is oxidised to solvated protons at the electrode. 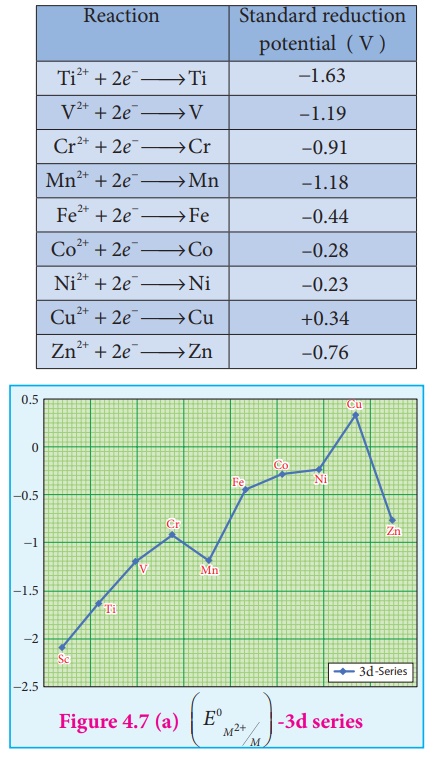 In 3d series as we move from Ti to Zn, the standard reduction potential (E0 M2+/M) value is approaching towards less negative value and copper has a positive reduction potential. i.e., elemental copper is more stable than Cu2+. There are two deviations., In the general trend, Fig shows that (E0 M2+/M) value for manganese and zinc are more negative than the regular trend. It is due to extra stability which arises due to the half filled d5 configuration in Mn2+ and completely filled d10 configuration in Zn2+.

Transition metals in their high oxidation states tend to be oxidizing . For example, Fe3+ is moderately a strong oxidant, and it oxidises copper to Cu2+ ions. The feasibility of the reaction is predicted from the following standard electrode potential values.

The standard electrode potential for the M3+ / M2+ half-cell gives the relative stability between M3+ and M2+. The reduction potential values are tabulated as below. 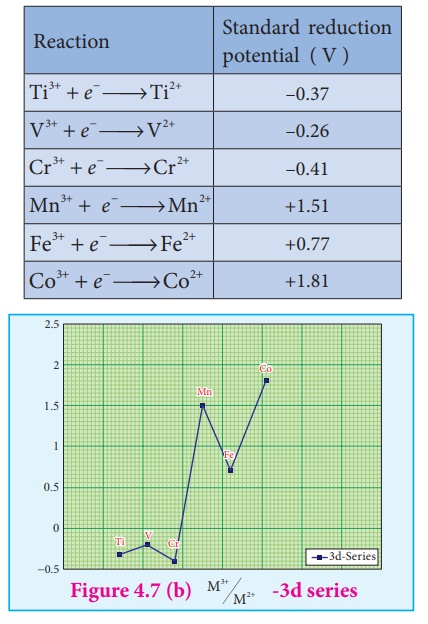 The negative values for titanium, vanadium and chromium indicate that the higher oxidation state is preferred. If we want to reduce such a stable Cr3+ ion, strong reducing agent which has high negative value for reduction potential like metallic zinc ( E0 = − 0.76 V) is required.

The high reduction potential of Mn3+/Mn2+ indicates Mn2+ is more stable than Mn3+. For Fe3+/Fe2+ the reduction potential is 0.77V, and this low value indicates that both Fe3+ and Fe2+ can  exist under normal conditions. The drop from Mn to Fe is due to the electronic structure of the ions concerned.Mn3+ has a 3d4 configuration while that of Mn2+ is 3d5. The extra stability associated with a half filled d sub shell makes the reduction of Mn3+ very feasible (E0 = +1.51V).

Most of the compounds of transition elements are paramagnetic. Magnetic properties are related to the electronic configuration of atoms. We have already learnt in XI STD that the electron is spinning around its own axis, in addition to its orbital motion around the nucleus. Due to these motions, a tiny magnetic field is generated and it is measured in terms of magnetic moment. On the basis of magnetic properties, materials can be broadly classified as (i) paramagnetic materials (ii) diamagnetic materials, besides these there are ferromagnetic and antiferromagnetic materials.

Materials with no elementary magnetic dipoles are diamagnetic, in other words a species with all paired electrons exhibits diamagnetism. This kind of materials are repelled by the magnetic field because the presence of external magnetic field, a magnetic induction is introduced to the material which generates weak magnetic field that oppose the applied field.

Ferromagnetic materials have domain structure and in each domain the magnetic dipoles are arranged. But the spin dipoles of the adjacent domains are randomly oriented. Some transition elements or ions with unpaired d electrons show ferromagnetism.

3d transition metal ions in paramagnetic solids often have a magnetic dipole moments corresponding to the electron spin contribution only. The orbital moment L is said to be quenched. So the magnetic moment of the ion is given by

Where S is the total spin quantum number of the unpaired electrons and is µB Bohr Magneton.

Therefore the spin only magnetic moment is given by 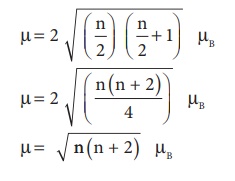 The magnetic moment calculated using the above equation is compared with the experimental values in the following table. In most of the cases, the agreement is good. 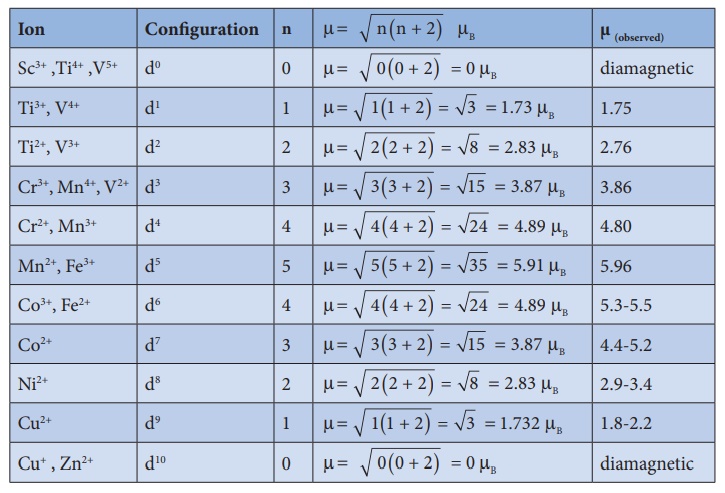 The chemical industries manufacture a number of products such as polymers, flavours, drugs etc., Most of the manufacturing processes have adverse effect on the environment so there is an interest for eco friendly alternatives. In this context, catalyst based manufacturing processes are advantageous, as they require low energy, minimize waste production and enhance the conversion of reactants to products.

Many industrial processes use transition metals or their compounds as catalysts. Transition metal has energetically available d orbitals that can accept electrons from reactant molecule or metal can form bond with reactant molecule using its d electrons. For example, in the catalytic hydrogenation of an alkene, the alkene bonds to an active site by using its π electrons with an empty d orbital of the catalyst.

The σ bond in the hydrogen molecule breaks, and each hydrogen atom forms a bond with a d electron on an atom in the catalyst. The two hydrogen atoms then bond with the partially broken π -bond in the alkene to form an alkane.

In certain catalytic processes the variable oxidation states of transition metals find applications. For example, in the manufacture of sulphuric acid from SO3, vanadium pentoxide (V2O5) is used as a catalyst to oxidise SO2. In this reaction V2O5 is reduced to vanadium (IV) Oxide (VO2).

Some more examples are discussed below,

(i) Hydroformylation of olefins

A mixture of TiCl4 and trialkyl aluminium is used for polymerization.

An alloy is formed by blending a metal with one or more other elements. The elements may be metals or non-metals or both. The bulk metal is named as solvent, and the other elements in smaller portions are called solute. According to Hume-Rothery rule to form a substitute alloy the difference between the atomic radii of solvent and solute is less than 15%. Both the solvent and solute must have the same crystal structure and valence and their electro negativity difference must be close to zero. Transition metals satisfying these mentioned conditions form a number of alloys among themselves, since their atomic sizes are similar and one metal atom can be easily replaced by another metal atom from its crystal lattice to form an alloy. The alloys so formed are hard and often have high melting points. Examples: Ferrous alloys, gold – copper alloy, chrome alloys etc.,

·           They are hard and show electrical land thermal conductivity

·           They have high melting points higher than those of pure metals

Transition elements have a tendency to form coordination compounds with a species that has an ability to donate an electron pair to form a coordinate covalent bond. Transition metal ions are small and highly charged and they have vacant low energy orbitals to accept an electron pair donated by other groups. Due to these properties, transition metals form large number of complexes. Examples: [Fe(CN)6]4- , [Co(NH3)6]3+ , etc..

The chemistry of coordination compound is discussed in unit 5.