The Trait Approach: Traits and the Environment

It seems plausible, then, that genes influence personality in a variety of ways—by deter-mining the reactivity of neurotransmitter systems, the threshold for activation in the amygdala, and more.

Traits and the Environment

It seems plausible, then, that genes influence personality in a variety of ways—by deter-mining the reactivity of neurotransmitter systems, the threshold for activation in the amygdala, and more. But, as we have repeatedly noted, genetic influence will emerge only if certain environmental supports are in place. In addition, virtually any character-istic shaped by the genes is also likely to be shaped by environmental factors. What are the environmental factors relevant to the development of someone’s personality? Three sources of influence have been widely discussed: cultures, families, and differences among members within the same family.

As we have seen, the evidence is mixed on whether the Big Five dimensions are as useful for describing personalities in Korea as they are in Kansas, as useful in Niger as they are in Newport. But no matter what we make of this point, we need to remember that the Big Five is simply a framework for describing how people differ; if the framework is in fact universal, this simply tells us that we can describe personalities in different cultures using the same (universal) measuring system, just as we can measure objects of different sizes using the same ruler. This still leaves open, however, what the personalities are in any given culture—that is, what we will learn when we use our measuring system.

Scholars have long suggested that people in different cultures have different personalities—so that we can speak of a “German personality,” or a “typical Italian,” and so on. One might fear that these suggestions amount to little beyond stereotyping, and indeed, some scholars have argued that these perceptions may be entirely illusory (McCrae & Terracciano, 2006). Mounting evidence suggests, however, that there is a kernel of truth in some of these claims about national character. For example, one study has shown that there are differences from one country to the next in how consci-entious people seem to be. These differences are manifest in such diverse measures as pedestrians’ walking speed, postal workers’ efficiency, accuracy of public clocks, and even longevity in each of these countries (Heine, Buchtel, & Norenzayan, 2008)!

Where might these cultural differences in personality come from? One long-standing hypothesis is that the key lies in how a group of people sustains itself, whether through farming or hunting or trade (Barry, Child, & Bacon, 1959; Hofstede, 2001; Maccoby, 2000). More recent models, in contrast, take a more complex view, and sug-gest that cultural differences in personality—whether between nations or across regions within a single nation—arise via a combination of forces (Jokela, Elovainio, Kivimaki, & Keltikangas-Jarvinen, 2008; Rentfrow, Gosling, & Potter, 2008). These forces include historical migration patterns, social influence, and environmental factors that dynamically reinforce one another over time. To make this concrete, let’s consider immigrants who first make their way to a new geographical region (whether fleeing persecution or seeking prosperity). It seems unlikely that these trailblazers will be a ran-dom sample of the larger population. Instead, the mere fact that they decided to relo-cate suggests that they may be willing to take risks and more open to new experiences in comparison to others who were not willing to emigrate. This initial difference might then be magnified via social influence—perhaps because the especially extraverted or open individuals engaged in practices that shaped the thoughts, feelings, and behaviors of those around them.

Arguments like these may help us understand why different regions within the United States often seem characterized by distinct personality types, with neuroticism especially common in some of the mid-Atlantic states and openness to new experience 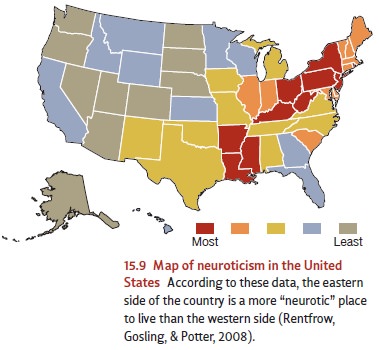 common in the Pacific Northwest. Indeed, one recent book (Florida, 2008) urges people to seek out regions that have personalities compat-ible with their own—providing yet another factor shaping regional or national personality: People may move to an area because they believe (or hope) certain traits are common there, and this selective migration can itself create or magnify regional differences (Figure 15.9).

A similar message emerges from a study that compared the personality traits of pairs of adult twins. Some of the twins had been reared within the same family; others had been reared apart and had been separated for an average of over 30 years. Among the twins reared together the personality scores for identical twins were, as usual, more highly correlated than the scores of fraternal twins, with correlations of .51 and .23, respectively. Thus, greater genetic resemblance (identical twins, remember, share all of their genes; fraternal twins share only half of their genes) led to greater personality resemblance. Amazingly, though, the twins who were reared apart and had been separated for many years showed nearly the same pattern of results as twins who grew up together. The correlations were .50 and .21 for identical and fraternal twins, respectively. (Moloney, Bouchard, & Segal, 1991).

One might have expected the correlations to be considerably lower for the traits of the twins who had been raised apart, since they were reared in different family environ-ments. That the results were nearly the same whether the twins were raised together or apart speaks against granting much importance to the various environmental factors that make one family different from the next (Bouchard, 1984; Bouchard et al., 1990; Tellegen et al., 1988; also see Turkheimer & Waldron, 2000).

Some authors have drawn strong conclusions from these data—namely, that the family plays little role in shaping personality (J. R. Harris, 1998). We would urge cau-tion, though, in making this sweeping claim. Most of the available evidence comes from families whose socioeconomic status was working class or above, and this range is rather limited. It does not include the environments provided by parents who are unemployed or those of parents who abuse or neglect their children. If the range had been broadened to include more obviously different environments, between-family environmental differences would surely have been demonstrated to be more important (Scarr, 1987, 1992). 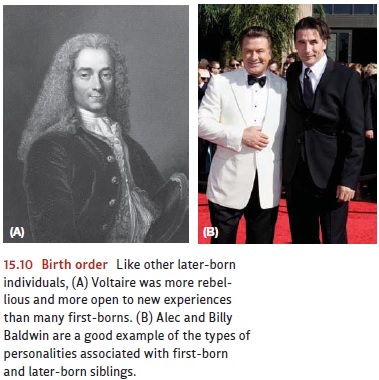 share many aspects of their objective environment. They have the same parents, they live in the same neighborhood, they have the same religion, and so on. But the environments of children within a family also differ in crucial ways. They have different friends, teach-ers, and peer groups, and these can play an important role in shap-ing how they behave. Moreover, various accidents and illnesses can befall one child but not another, with potentially large effects on their subsequent personalities. Another difference concerns the birth order of each child, since the family dynamic is different for the first-born than it is for later-born children (Figure 15.10). Some authors have suggested that birth order may have a powerful influ-ence on personality, with later-borns being more rebellious and more open to new experiences than first-borns (Sulloway, 1996).

Factors like these suggest that the family environment may matter in shaping per-sonality, but they indicate that we need to focus on within-family differences rather than between-family factors, like the fact that one family is strict and another lenient, or the fact that some parents value education while others value financial achievement. Indeed, within-family factors may be especially important since parents often do what they can to encourage differences among their children; some authors have suggested that this is a useful strategy for diminishing sibling rivalry (Schachter, 1982).

The gender of the child also plays a role. A brother and sister grow up in the same household, but are likely to be treated differently by their parents (not to mention other relatives, teachers, and friends). This, too, will provide a family influence shaping person-ality (although obviously these gender effects reach well beyond the family), but will once again produce within-family contrasts. In any case, this sort of differential treatment for men and women may—especially when combined with the biological differences between the sexes—help us understand why women score higher on the “agreeableness” dimension of the Big Five (Figure 15.11; Srivastava, John, Gosling, & Potter, 2003), and why women are less likely to be sensation-seekers (Zuckerman, 1994). In this context, though, we should also note that many of the popular conceptions about gender differ-ences in personality—which are surprisingly robust across cultures (Heine, 2008)—are probably overstated; in fact, women and men appear remarkably similar, on average, on many aspects of personality (Feingold, 1994; J. S. Hyde, 2005). 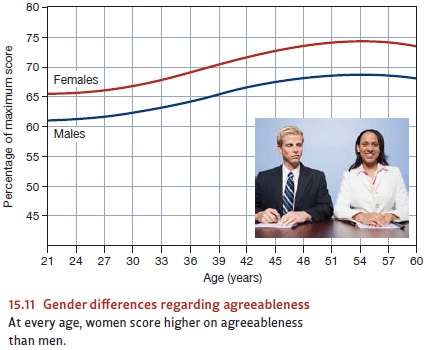