The Trait Approach: The Big Five

An unabridged English dictionary contains almost 18,000 personality-relevant terms (Allport & Odbert, 1936). To reduce this list to manageable size, early trait theorists put many of these words to the side simply because they were synonyms, slang, or just uncommon words. Raymond Cattell, one of the pioneers in this arena, gave this kind of shortened list of words to a panel of judges, asking them to use these words to rate a group of people they knew well (Cattell, 1957). Their ratings were compared to find out which terms were redundant. This process allowed Cattell (1966) to eliminate the redundant terms, yielding what he thought were the 16 primary personality dimensions.

Subsequent investigators presented evidence from further analyses that several of Cattell’s dimensions still overlapped, so they reduced the set still further. A few investigators, such as Hans Eysenck (1967), argued that just two dimensions were needed to describe all the variations in personality, although he later added a third. Others argued that this was too severe a reduction, and, over time a consensus has emerged around five major personality dimensions as the basis for describing all personalities; this has led to a personality system appropriately named the Big Five (D. W. Fiske, 1949; Norman, 1963; Tupes & Christal, 1961).

As we will see, personality theorists rely on many different types of data. To measure where a person stands on each  of  the  Big  Five  dimensions,  researchers  typically  use  self- report data, employing measures such as Costa and McCrae’s NEO- PI-R (1992)—asking people in essence to describe themselves, or to indicate how much they agree with proposed statements that might describe them. Self-report measures assume, though, that each of us knows  a  great  deal  about  our  own  beliefs,  emotions,  and  pastactions, and so can describe ourselves. But is this assumption correct? What if people lack either the self-knowledge or the honesty required for an accurate self-report (Dunning, Heath, & Suls, 2004)?

To find out, one option is to collect data not just from the people we are interested in, but also from others who know these people well. These informant data can come from parents, teachers, coaches, camp counselors, fellow parishioners, and so on (Figure 15.1). Though informants’ perspectives are not perfect, they provide another important win-dow onto the person, and across studies researchers have found that self-report and informant data generally agree well in the case of ratings of the Big Five (McCrae & Costa, 1987). It seems, then, that most people do know themselves reasonably well—a point that is interesting for its own sake, and also makes our assessment of traits rela-tively straightforward. 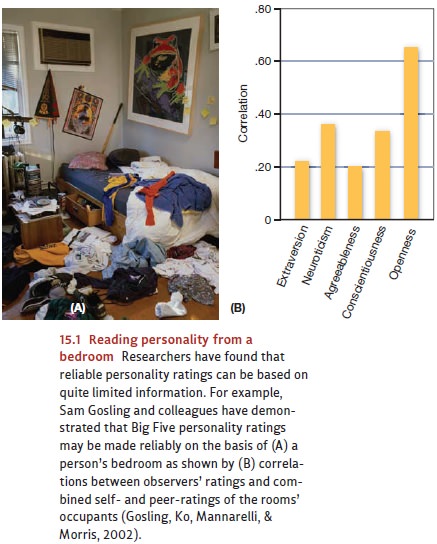 No matter how they’re measured, the Big Five dimensions are probably best concep-tualized in hierarchical terms, as shown in Figure 15.2. This figure presents just one of the Big Five dimensions, extraversion, and shows that this dimension is really a broad summary of many more specific facets of personality. Each of these facets in turn is made up of even more specific behavioral tendencies, which are themselves made up of specific behaviors. If we choose terms higher in the hierarchy (e.g., the Big Five themselves), we gain a more economical description with fewer, broader terms.

At the same time, though, if we choose terms lower in the hierarchy, we gain accu-racy, with the traits providing a more direct and precise description of each person’s behavior (John & Srivastava, 1999). Thus, for example, if we want to predict how a new 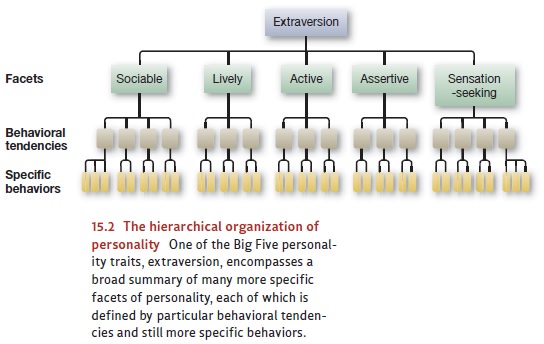 employee will perform on the job, or predict how well a nurse will perform under stress, we might want more than the overarching description provided by the Big Five itself; we might want to zoom in for a closer look at the way the Big Five traits can manifest themselves in a particular individual. One way to do this is to use the Q-Sort, a set of 100 brief descriptions that a rater sorts into a predetermined number of piles, corresponding to the degree to which they describe a person (Block, 2008). There are also hundreds of more-specific measures available, each seeking to describe a particu-lar aspect of who someone is and how he or she behaves.

Cattell and the Big Five theorists developed their personality factors in English, and they used mostly middle-class English-speaking subjects to validate their theories. As discussed, though, cultures differ in how they view human nature. Are the Big Five dimensions equally useful as we move from one culture to the next?

We have already alluded to the fact that the Big Five dimensions do seem to describe personalities in a wide range of cultures. More precisely, as we move from one culture to the next, we still find that the trait labels people use to describe each other can be “boiled down” to the same five dimensions (McCrae & Costa, 1997; McCrae & Terracciano, 2005). There are, however, reasons to be cautious about these findings. As one concern, instead of allowing natives of a culture to generate and organize personality terms themselves (Marsella, Dubanoski, Hamada, & Morse, 2000), most researchers simply administer a test that was already developed using English-speaking subjects. This approach may not allow people’s natural or routine understandings to emerge (Greenfield, 1997), and so, even if these studies confirm the existence of the Big Five dimensions in a population, they do not show us whether these are the most frequently used categories in that culture, or whether they are useful in predicting the same behaviors from one culture to the next.

In fact, when participants have been allowed to generate personality terms on their own, support for the cross-cultural generality of the Big Five has been mixed. For example, when researchers explored the personality traits used by Hong Kong and mainland Chinese samples, they found four factors that could be related to the Big Five, but one factor that seemed to be uniquely Chinese, which reflected interpersonal relatedness and harmony (Cheung, 2004; Cheung & Leung, 1998; see Figure 15.3). In Spanish samples, seven factors seem best to describe personality (Benet-Martinez, 1999), five of which map reasonably well onto the Big Five. Other researchers have found three factors in Italian samples (Di Blas, Forzi, & Peabody, 2000), and nine fac-tors bearing little resemblance to the Big Five were used by students in Mexico (La Rosa & Diaz-Loving, 1991). Thus, although the Big Five seem to be well established among many cultures, there is room for debate about whether these dimensions are truly universal. 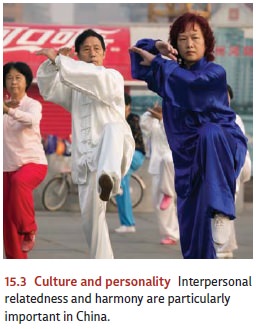