Plainly, therefore, we need to be very careful about interpreting Freud’s claims—with powerful challenges raised to both his central methods and his key concepts.

Plainly, therefore, we need to be very careful about interpreting Freud’s claims—with powerful challenges raised to both his central methods and his key concepts. Even so, many scholars are convinced that Freud’s body of work contains a number of important (some would say brilliant) insights, and so we might ask how we can preserve these insights without endorsing the entire Freudian conception. As it turns out, many schol-ars have tried to do this, producing a welter of schools and camps, each offering its own extensions and elaborations of Freud’s thinking.

EGO PSYCHOLOGY AND MECHANISMS OF DEFENSE

One major theme among those who carried forward the torch of psychoanalytic theory was that Freud had not sufficiently emphasized the skills and adaptive capacities of the ego. Writers of this persuasion, loosely grouped under the heading of ego psychology, sought to extend and complete Freud’s theorizing.

The various ego psychologists each have their own theoretical emphases, but all agree with Freud’s contention that unconscious conflict is found in the well adjusted as well as in people with disabling mental disorders. What is essential for these more modern theorists, though, is how those conflicts can be resolved in a fashion that is appropriate, pragmatic, and, ultimately, healthy. Adherents of this position stress the positive aspects of the self as it tries to cope with the world—to deal with reality as it is rather than to distort it or hide from it. Seen in this light, the ego is not just an arbiter between id and superego, but a clever strategist with intrinsic competencies (A. Freud, 1946; Hartmann, 1964).

Building on this perspective, investigators have explored how coping patterns evolve over the course of the life span, and some of the data derive from longitudinal studies covering a span of 20 to 30 years (J. Block & J. H. Block, 2006). An example is George Vaillant’s analysis of the case reports of 94 male Harvard College graduates studied at differ- ent points in their life span. They were extensively interviewed at age 19, then again at 31, and yet again at 47. Vaillant studied the predominant patterns of defense—that is, ways of coping—each man used at these three ages. He classified the coping patterns according to their level of psychological  maturity. At  the  bottom  of  the  hierarchy  were  mecha- nisms that are often found in early childhood and during serious men- tal  disorder,  such  as  denial  or  gross  distortions  of  external  reality. Further up the ladder were patterns often seen in adolescence and in disturbed adults, such as projection, hypochondria, and irrational, emo- tional outbursts. Still higher were the mechanisms studied by Freud andseen in many adults—repression, reaction formation, and the like. At the top of the hierar- chy were coping patterns that

Vaillant considered healthy—such as humor, suppression (a conscious  effort  to  push  anxiety-provoking  thoughts  out  of  mind, at  least  for  the  time being, as opposed to repression, which is an unconscious process), and altruism (in which one tries to give to others what one might wish to receive oneself Vaillant’s findings indicated considerable continuity. Men with more adaptive coping patterns  at  age  19  were  more  likely  to  have  mature  patterns  in  their  forties, and  these patterns in turn predicted the results on various objective indices that personality psy-chologists  refer  to  as life data, such as satisfaction  in marriage, rewarding  friendships, gratifying jobs, and good physical health (Figure 15.19). As is often the case, it is unclear whether the mature coping defenses produced success in marriage and career or vice versa, but it is worth knowing that the two tend to be correlated (Vaillant, 1974, 1976, 1977, 1994). 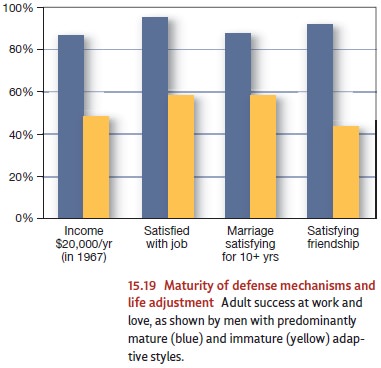 This correlation was also observed in a study of 131 inner-city males interviewed in junior high school and then surveyed 30 years later (G. E. Vaillant, Bond, & Vaillant, 1986).

Yet another development of Freud’s thinking comes from scholars who broadly sup-ported Freud’s theorizing, but felt he had insufficiently emphasized the real (as opposed to fantasized) relations an individual had with others. Despite their many differences, these object relations theorists held that relationships with important oth-ers, whom they rather oddly referred to as “objects,” constitute a crucial and relatively neglected motive underlying human behavior. Arguably, though, the object relations theorist with the broadest and most enduring impact was John Bowlby (1907–1990).

As described, Bowlby was a British psychiatrist who believed people were motivated by the desire for connection and closeness with others. In particular, Bowlby believed that a child was powerfully shaped by her experiences with her primaryattachment figure (typically, but not always, her mother) and emerged from childhood with a set of foundational beliefs about both herself (as essentially good and lovable or not) and others (as essentially good and loving or not). These mental representations of self and other are referred to as internal working models.

Bowlby emphasized that different children develop different work-ing models, but it was Mary Ainsworth (1913–1999) who created an experimental procedure designed to probe these differences, and, specifically, to assess what type of attachment a child had formed with his caregiver (Ainsworth, Blehar, Waters, & Wall, 1978). As we dis-cussed, this Strange Situation test can be used to cate-gorize children as securely attached, anxious/avoidant in their attachment, anxious/resistant, or disorganized in their attachment. These attachment patterns, in turn, can then be used as predictors for a number of subsequent measures—including the child’s personality in the next years, and the quality of the child’s social relations.

Atttachment theory has been a significant source of inspiration for researchers in per-sonality, who have found that the attachment patterns established in early childhood seem to have considerable staying power (Bartholomew & Horowitz, 1991; Brennan, Clark, & Shaver, 1998; Mikulincer & Shaver, 2007). For example, Shaver and Clark (1994) found that compared to secure adults, anxious/avoidant adults are less interested in romantic relationships and seem less upset when the relationships end. In contrast, anxious/resistant adults are highly focused on their relationships, and they fret and fume about them to a much greater extent than secure individuals (Figure 15.20). 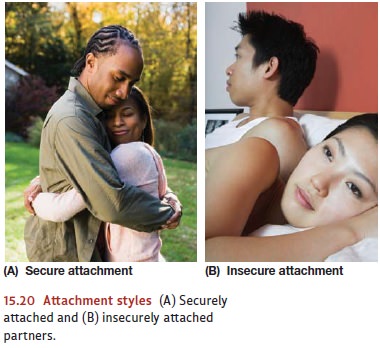 Does all of this mean that one is simply out of luck if one has not developed the “right” working model in childhood? Happily, the answer appears to be no. Working models of self and other seem to be at least somewhat malleable and context depend-ent, and new experiences (whether with friends, dating partners, or a therapist) seem to have the power to refashion a person’s early ideas about self and other. Even so, the ability to predict adult outcomes, based on childhood patterns, does support at least one part of Freud’s perspective—namely, the claim that the early years play a critical role in shaping adult behaviors, expectations, and personality.