In the early part of the twentieth century, the public—especially in the United States— was fascinated by the bearded Viennese doctor who spoke so frankly about sex.

Contributions of the Psychodynamic Approach

In the early part of the twentieth century, the public—especially in the United States— was fascinated by the bearded Viennese doctor who spoke so frankly about sex. Scholars in the social sciences, literature, and the arts flocked to read his writings because they were so far-reaching in scope, so profound in their implications.

Since then, a number of criticisms have—as we have seen—been leveled against the psychodynamic approach. Even with these criticisms, though, Freud’s contribution to psychology—and to Western thinking—is enormous (Figure 15.21). His work draws our attention to a set of ideas whose relevance today belies the hundred plus years that have passed since he started articulating his views (Westen, 1998). These ideas include the notion that many important psychological processes—especially affective and motivational processes—operate outside awareness, and the idea that our motives and impulses are often at odds with one another. Contemporary psychologists would still endorse Freud’s claim that people’s thoughts, feelings, and behaviors are strongly influ-enced by their mental representations of important people in their lives, as well as his claim that among other things, development revolves around finding socially accept-able ways of managing sexual and aggressive impulses. Admittedly, many of these ideas have their origins in theories predating Freud. It is also true that the modern conce-ption of these ideas is, in important ways, different from Freud’s specific proposals, and that these ideas, in the modern era, have a less central position than they had in Freud’s theorizing. Nonetheless, Freud undeniably deserves credit for making these essential ideas prominent for many modern theories of personality. 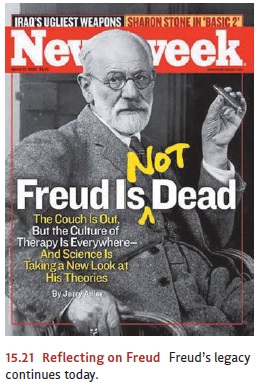