The toluene/xylene pathway is the best characterized of the aromatic degradation systems. It is carried on the pTOL and pXYL plasmids. (Historically, these two types of plasmids were isolated and named for the degradation of toluene or xylene.

The toluene/xylene pathway is the best characterized of the aromatic degradation systems. It is carried on the pTOL and pXYL plasmids. (Historically, these two types of plasmids were isolated and named for the degradation of toluene or xylene. However, although the plasmids differ in other respects they have essentially identical sets of degradative genes.) The same pathway (Fig. 13.10) degrades toluene (R = H) and xylene (R = CH3) as well as some derivatives. The “upper” pathway attacks the side chains and the “lower” pathway breaks open the aromatic ring. 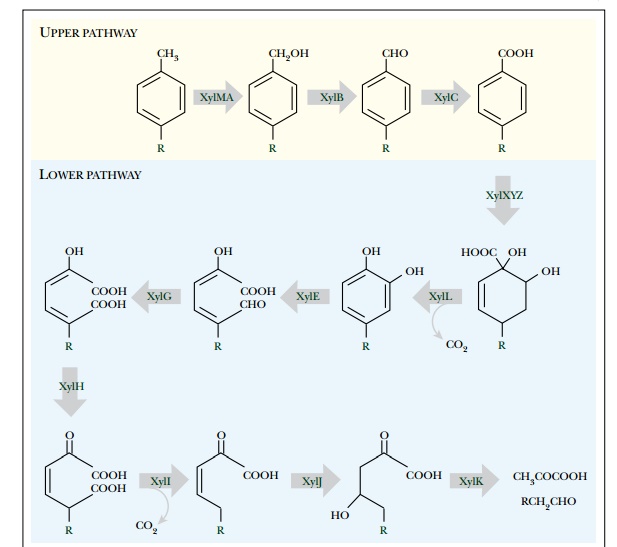 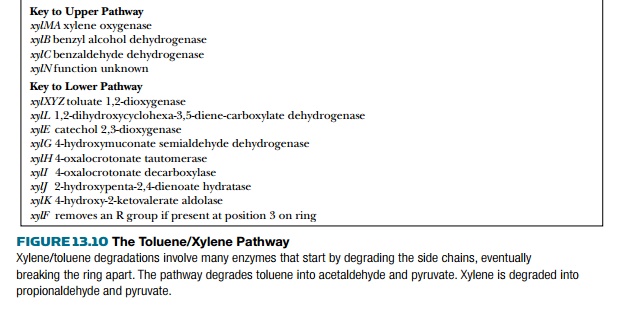 Ring dioxygenases such as xylene or toluene oxygenase usually consist of three components.

The first component (e.g., the XylX protein of the xylene pathway) transfers reducing  equivalents from NADH or NADPH via an enzyme bound FAD to an Fe2S2 cluster. The second and third proteins (e.g., XylY and XylZ) carry more Fe2S2  clusters and consume molecular O2. Together they form the terminal oxygenase.

The xyl genes are induced by toluene or benzyl alcohol. These inducers bind to the XylR protein, which activates the promoters for the upper pathway genes (the xylCMABN operon) as well as the xylS gene (Fig. 13.11). The upper pathway produces benzoate, which acts as the inducer for the lower pathway by binding to XylS protein. This then activates the lower pathway promoter and induces the xylXYZLEGFJKIH operon. (Promoters activated by the XylR protein require the alternative sigma factor RpoN [= NtrA], which is normally needed by genes for nitrogen metabolism. The significance of this is uncertain.)

The Tol/Xyl system can be engineered to accept substrates that are not originally used. For example, the Xyl pathway cannot normally degrade the aromatic hydrocarbon, 4-ethylbenzoate (4-EB). There are two problems. First, XylS activator protein does not recognize 4-EB. However, xylS* mutants have been selected that make an altered XylS protein, which has gained the ability

to bind 4-EB and induces the upper pathway. This converts 4-EB to 4-ethylcatechol. The second problem is that the xylE product, catechol-2,3-dioxygenase, is inhibited by 4-ethylcatechol. However, a xylE* mutant has been isolated that makes an altered enzyme which not only is resistant to 4-ethylcatechol, but can use it as a substrate. The xylS* xylE* double mutant converts 4-ethylbenzoate completely to pyruvate plus acetaldehyde (Fig. 13.12). Such an improved system can easily be transferred to other host bacteria since it is already plasmid-borne. 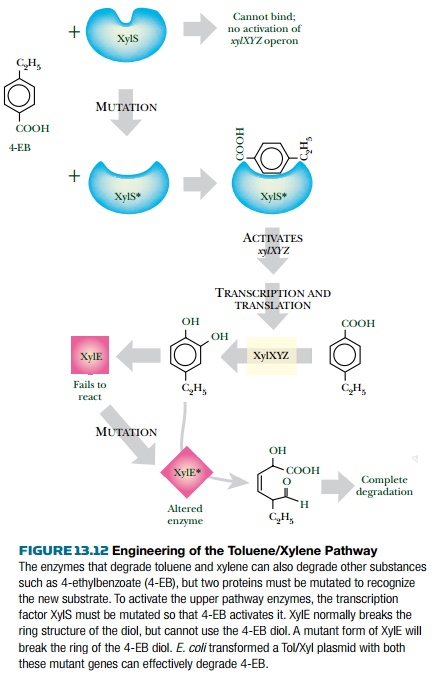