The growth of industrial civilization, in particular the use of fossil fuels for energy and the development of the organic chemical industry, have led to the pollution of the environment with a wide range of compounds of nonbiological origin.

The growth of industrial civilization, in particular the use of fossil fuels for energy and the development of the organic chemical industry, have led to the pollution of the environment with a wide range of compounds of nonbiological origin.

Many fossil fuel deposits, of both coal and oil, contain a high percentage of sulfur—up to 5% sulfur for many coals from Eastern Europe or the American Midwest. Burning high- sulfur coal releases large quantities of sulfur dioxide into the atmosphere, which leads to the formation of acid rain. Among the possible solutions to this problem is to develop bacteria capable of removing the offending sulfur compounds from the coal (or oil) before combustion. 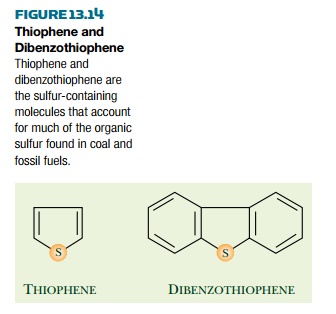 Several naturally occurring sulfur bacteria such as Thiobacillus and Sulfolobus can convert pyrites (FeS2) the major form of inorganic sulfur found in coal, into soluble sulfate that can be rinsed away. The crucial issue, therefore, is to remove the organic sulfur, especially that found in thiophene rings, which typically accounts for 70% or more of the organic sulfur (Fig. 13.14). Although compounds containing thiophene rings are almost never found in modern-day living organisms, they form a substantial part of the organic sulfur fraction of fossil fuels such as coal and oil. The major quinone of Archaebacteria such as Sulfolobus is caldariellaquinone, which contains a thiophene ring fused to a benzoquinone. Conceivably, the fused thiophenes of coal are the metabolic fossils of archaebacterial metabolism.

Dibenzothiophene (DBT) is a widely used model compound (Fig. 13.14) thought to be representative of the organic sulfur in coal and oil. Biodegradation of DBT and removal of sulfur involves several steps, a scheme known as the 4S pathway (Fig. 13.15). Most bacteria capable of degrading thiophene derivatives show only partial breakdown. Many do not completely remove the sulfur from its organically bound form, and others only use DBT that has already been oxidized to the sulfone or sulfoxide level (see Fig. 13.15). Full 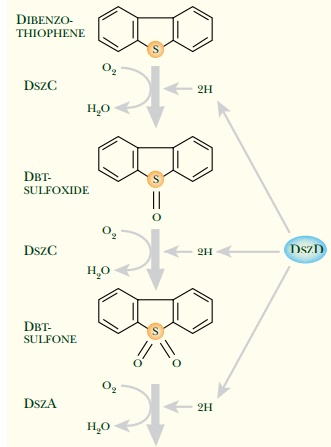 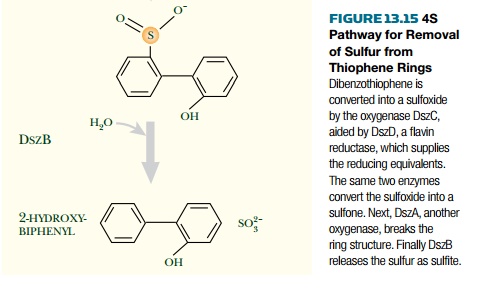 desulfurization requires either finding a natural isolate that can carry out all the steps or the genetic assembly of the individual steps of the 4S pathway from different bacteria into a final engineered strain.

Certain bacteria, especially certain species of Rhodococcus, do indeed completely desulfurize dibenzothiophene, as well as degrade related heterocyclics such as dibenzofuran and xanthones. The dszABC operon of Rhodococcus is found on a linear plasmid and encodes three enzymes responsible for the 4S pathway. In addition a flavin reductase encoded by the dszD gene is needed to supply reduced FMN (see Fig. 13.15). The dszD gene is not linked to the dszABC operon. The enzymes are as follows:

However, there are several problems with these natural isolates:

(a)  Rhodococcus is not well characterized genetically, so further modification is difficult.

(b)  Desulfurizing coal or oil will require robust bacteria that can be grown easily to high density. Although not feeble, Rhodococcus is not especially convenient in this respect.

(c)  The desulfurizing genes (dszABC) in Rhodococcus are used naturally to obtain sulfur (not to degrade benzothiophenes for carbon and energy).

Consequently, they are expressed only at a low level for bacterial growth. Moreover, other sulfur compounds, both inorganic and organic, repress the operon. Thus, the inorganic sulfur present in most high-sulfur coal and oil would repress the dszABC genes. Furthermore, pregrowth of the dibenzothiophene and related compounds. In these cases, the same enzyme hydroxylates the aromatic rings and also adds oxygen to the thiophene sulfur, giving the sulfoxide and then the sulfone. The DszC enzyme itself has also been mutated to  High-level operation of the 4S pathway requires a large flow of reducing equivalents. In cells carrying a cloned dszABC operon, reduction of FMN by flavin reductase becomes the limiting factor in removal of sulfur from dibenzothiophene. However, flavin reductases from several other bacteria work as well as or better than the Rhodococcus DszD enzyme. For example, the HpaC enzyme from E. coli has been cloned and expressed at high levels, and it greatly speeds desulfurization. As a further modification, the hpaC gene and the dszABC genes have been joined together to form a single operon under control of the tac promoter. (This is a hybrid promoter with the RBS from the trp promoter and the operator of the lac promoter. It is therefore a strong promoter that is induced by IPTG.) Thus the combined desulfurization module can be induced by IPTG when required.

Despite adding oxygen to the sulfur of dibenzothiophene, the DszC enzyme is closely related to the ring dioxygenases that add two hydroxyl groups to aromatic rings.