Perhaps the simplest “pathway” of all is the conversion of water to ice. This process may be “catalyzed” by proteins known as ice nucleation factors.

Perhaps the simplest “pathway” of all is the conversion of water to ice. This process may be “catalyzed” by proteins known as ice nucleation factors. On a microscopic scale, solidifying water forms crystals of ice. However, ice crystals need a microscopic nucleus or “seed” to form around. In the absence of structures allowing nucleation, water will supercool down to –8 °C without solidifying. Thus, ice nucleation factors are specialized proteins, mostly found in certain bacteria, which provide nuclei for crystallization.

Each year, frost causes more than a billion dollars in damage to crops in the United States alone. It is not the low temperature itself that does the damage. When water freezes to form ice, it expands, damaging plant tissues. The seeding of ice crystals on and within plants is mostly due to proteins on the surface of bacteria, especially Pseudomonas syringae and related species, which live on plants. The ice crystals that form damage the plant tissues and disrupt the vessels (xylem and phloem) that carry water and nutrients throughout the plant. If ice-nucleating bacteria are absent, ice fails to form and instead the water supercools, leaving the plants unharmed. 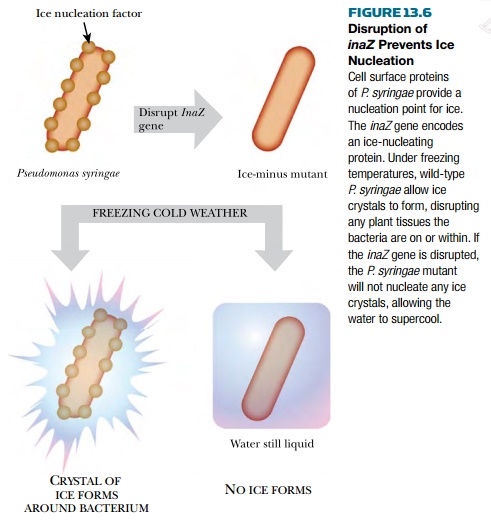