Plant cell walls contain a mixture of polysaccharides of high molecular weight. The major components are cellulose, hemicellulose, and lignin. Cellulose is a structural polymer of glucose residues joined by β-1,4 linkages.

Plant cell walls contain a mixture of polysaccharides of high molecular weight. The major components are cellulose, hemicellulose, and lignin. Cellulose is a structural polymer of glucose residues joined by β-1,4 linkages. This contrasts with starch and glycogen which are storage materials also consisting solely of glucose, but with α-1,4 linkages. Hemicellulose is a mixture of shorter polymers consisting of a variety of sugars, especially mannose, galactose, xylose, and arabinose, in addition to glucose. Lignin differs from these other polymers in two major respects. First, it is not a polysaccharide but consists of aromatic residues (primarily phenylpropane rings). Second, lignin is crosslinked into an insoluble three-dimensional meshwork structure.

Vast amounts of material derived primarily from plant cell walls are available as agricultural waste products. In nature, fungi and soil bacteria degrade this material slowly. Engineering these pathways to enhance the rate of reaction could be very beneficial. Cellulose, with its simple composition and regular structure, is the easiest to degrade and lignin the most difficult. Paper (plus cardboard and related materials) accounts for the largest fraction of the trash of industrial nations. Because paper consists almost entirely of cellulose, this too may potentially be converted to glucose by cellulose-degrading microorganisms. 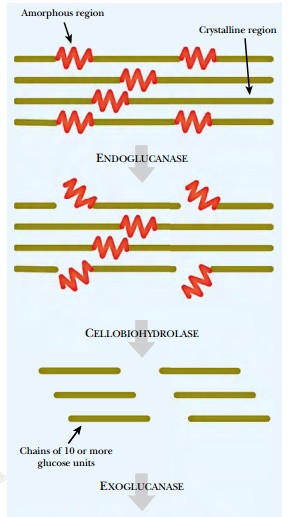 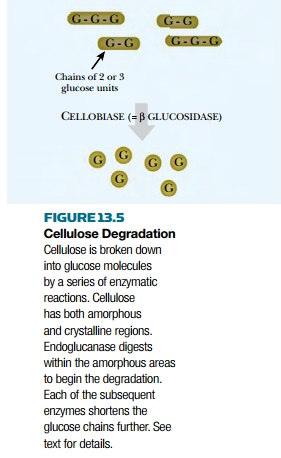 The polymer chains of cellulose are packed tightly side by side in a crystalline array with loosely packed, noncrystalline zones at intervals (Fig. 13.5). The challenge is to break down cellulose, yielding glucose that can be turned into alcohol or other products. Breakdown of cellulose requires several steps (Fig. 13.5), each catalyzed by a separate enzyme, as follows:

2.     Cellobiohydrolase cuts off sections with 10 or more glucose units from the free ends created by endoglucanase.

3.     Exoglucanase chops off units of two or three glucose units from the exposed ends, which are called cellobiose and cellotriose, respectively.

The genes for each of these four enzymes have been cloned from various microorganisms. Because cellulose is too big to enter the cell, the first three enzymes must be secreted and work outside.

Cellobiose and cellotriose (respectively the β-1,4-linked dimer and trimer of glucose) are released from cellulose outside the cell and may then be transported inside. They are finally broken into individual glucose molecules, which may be fermented to alcohol. So far, assorted pilot projects have demonstrated the degradation of cellulose from waste paper to glucose by adding separate enzymes purified from different sources. Alternatively, a series of cellulose-degrading microorganisms, each chosen for high levels of one particular enzyme, are used. Finally, yeast or Zymomonas is added to convert the glucose to alcohol.

Such multistage procedures are not very efficient because each step has problems with efficiency. Cellobiose acts as a feedback inhibitor of cellulose degradation and, similarly, glucose inhibits hydrolysis of cellobiose. Therefore, it is crucial that the end products of cellulose breakdown should be rapidly removed to allow continuous degradation of the starting materials. In fact, cellobiose degradation appears to be the limiting step in many natural cellulose degraders, and these organisms can often be improved by cloning the gene for cellobiase, placing it under a strong promoter, and putting it back into the organism in question.

Overall, what is desirable is a complete recombinant organism, which possesses genes for all four enzymes, expresses these at high levels, and efficiently converts cellulose to alcohol on its own. In practice, genes for cellulose degradation from both bacteria and fungi are first cloned and expressed in E. coli for ease of manipulation.

At present, genes for the individual stages have been isolated and characterized. Eventually, a cellulose degradation pathway may be assembled in either yeast or Zymomonas in order to convert waste cellulose materials to alcohol.