The sterol nucleus consists of four fused rings: three six-membered rings and one five-membered ring (Fig. 13.17 shows examples). Plants, animals, and fungi make a wide variety of sterols. Most bacteria do not make sterols, perhaps because synthesis of sterols involves molecular oxygen and many bacteria can grow anaerobically. Nonetheless, many bacteria do possess enzymes that can modify the structures of sterols made by other organisms.

Sterols are used both as membrane components (e.g., cholesterol) and as hormones. (Steroid hormones activate gene expression via receptor proteins. Note that steroids are sterol derivatives having keto rather than hydroxyl groups.) Sterols made or modified by other organisms may exert major effects on animals by interfering with the roles of the natural steroid hormones. In addition, a variety of humanmade molecules also act as steroid mimics. Although steroid hormones regulate a wide variety of processes, the effects of environmental sterols on reproduction have been the most visible. Indeed, many of them act by binding to estrogen receptors. Consequently, these compounds are sometimes referred to as xenoestrogens. 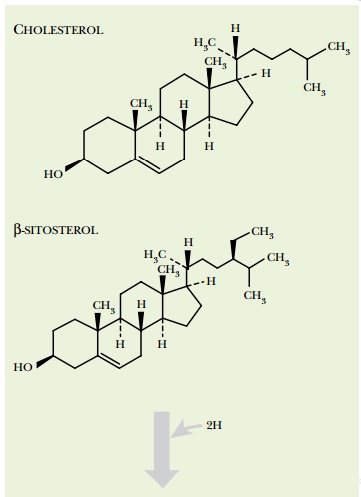 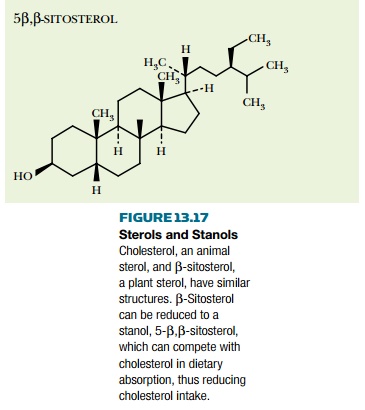 Cholesterol and its analogs also have significant effects on human health. For example, the level of cholesterol in the blood has a major effect on the blocking of arteries by fatty deposits (atherosclerosis). Absorption of cholesterol from food is greatly inhibited by many plant sterols and especially by their hydrogenated derivatives, or stanols. The sterol nucleus has a double bond in the 5–6 position of the second ring (Fig. 13.17). When this is reduced to a single bond, the resulting stanol has very different biological properties. Eating plant material rich in such stanols reduces dietary intake of cholesterol and so has a positive effect on health. Consequently, plant sterols are sometimes hydrogenated to the corresponding stanols during food processing. This may be done chemically or by using microorganisms.

Many bacteria possess sterol-modifying enzymes that carry out a wide variety of reactions. Some are able to reduce the 5–6 double bond, thus converting sterols into stanols. In addition, some bacteria, especially species of Eubacterium, can reduce cholesterol itself to coprostanol, which is poorly absorbed by the intestine. Sterol-modifying enzymes are therefore of great potential use, both in food processing and possibly in breaking down xenoestrogens for decontamination of the environment. Several genes for sterol-modifying enzymes from Eubacterium have been cloned and expressed in E. coli, and the corresponding enzymes have been purified and characterized.

Pathway engineering may also be of use in manufacturing sterols for therapeutic use. Steroids such as cortisone and prednisone are used to treat inflammatory diseases (arthritis, colitis, allergies, skin problems). Other uses for steroids include contraception and treating syndromes due to hormone deficiency. Today these steroids are made starting with plant sterols and using a mixture of chemical and microbial steps. Ultimately, the role of pathway engineering will be to provide a single microorganism that can carry out all the modification steps required in the manufacture of a particular product.