Home | | Biotechnology Applying the Genetic Revolution | Polyketides and Polyketide Antibiotics
Posted On :  08.06.2017 11:21 am

More and more disease-causing microorganisms are acquiring or mutating to antibiotic resistance. This is starting to cause problems in treating patients with certain infections.

More and more disease-causing microorganisms are acquiring or mutating to antibiotic resistance. This is starting to cause problems in treating patients with certain infections.

More novel antibiotics are becoming necessary simply to treat infections that were once susceptible to the earlier generation of antibiotics. Although new antibiotics are still to be found  in the wild, and some may be made by modification of a base compound (e.g., 7-ACA as described earlier), other approaches are also useful.

Combinatorial biosynthesis manipulates genes for useful natural products to generate a wide range of possible variants. These can then be screened for different and/or improved activities. In practice, only certain rather flexible biochemical pathways are susceptible to this type of manipulation. The best example is the polyketide pathway (Fig. 13.20). Polyketides are linear polymeric molecules. Polyketide synthesis begins with a small initiator molecule that is elongated by addition of subunits of two, three, or four carbons. However, each subunit contributes two carbons to the growing polymer backbone and its other carbon atoms form branches (methyl or ethyl groups).  As originally made, every other carbon in the polymer backbone carries a keto group—hence the name polyketide. 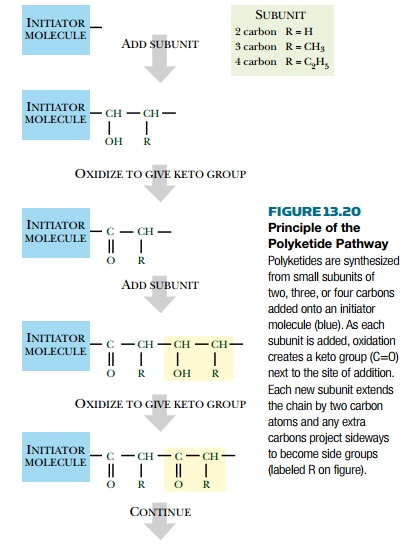 However, some of the keto groups may be reduced to hydroxyl groups or to CH2  groups during the polymer elongation process.

After synthesis, the polyketide chains form a variety of ring systems and are modified in various ways. Several families of antibiotics are polyketides, the best known being the tetracyclines and the macrolides (e.g., erythromycin).

Certain bacteria make these antibiotics naturally, especially those of the actinomycete family. The genes for each antibiotic pathway are usually clustered together, which is convenient for cloning and manipulation.

The polyketide synthases consist of modules, each of which is responsible for addition and modification of a polyketide subunit. Each module contains activities for:

■ Loading enzyme that carries the growing chain via a thiol ester

■ Transferase that passes growing polyketide to the next module

For example, the erythromycin system has six modules, each adding a 3C subunit, plus  a loading domain that picks up the initiator molecule and a releasing domain. These  modules are arranged on three separate polypeptide chains (Fig. 13.21). After release, the  erythromycin precursor is circularized and modified by addition of two sugar derivatives. 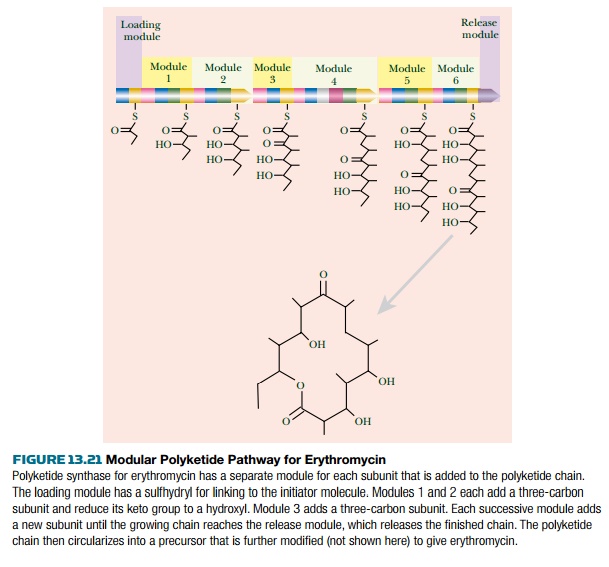 Polyketide pathways, such as the one for erythromycin, may be engineered by two main methods. First, the polymerizing enzyme of module 1 is inactivated. This prevents elongation of the natural initiator molecule. An artificial analog is then added and joins the polyketide pathway at module 2. Chemical groups present on the initiator analog will then be present in the final polyketide product (Fig. 13.22). 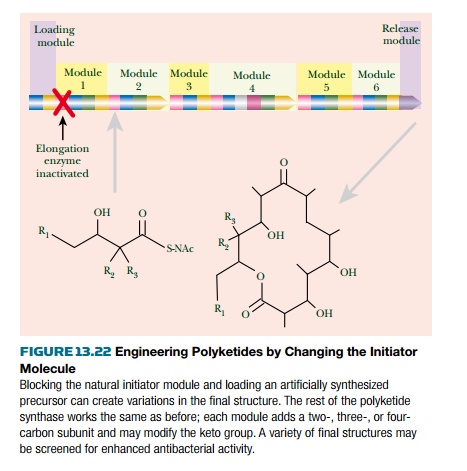 An even greater variety of polyketides can be generated by genetically altering the modules of the polyketide synthase. For example, a module that converts the keto group to a hydroxyl could be altered to leave the keto unchanged or to reduce it further to a methylene (CH2) group. Or a module that incorporates a two-carbon subunit could

be altered to use a three- or four-carbon precursor, thus introducing methyl or ethyl branches along the polyketide chain. For genetic engineering, the polyketide synthase gene cluster is normally moved into E. coli. The synthase modules may be altered by three major approaches:

With six successive modules, the potential for introducing variety is immense. Engineered polyketide gene clusters may be reinserted into a natural polyketide producer, such as Streptomyces, or expressed in E. coli. A library of polyketides can then be generated and screened for useful properties.