Enzymes that attack aromatic rings often have a wide substrate range. Often they may work on related compounds whose rings contain sulfur, oxygen, or nitrogen atoms, as well as on hydrocarbons.

Enzymes that attack aromatic rings often have a wide substrate range. Often they may work on related compounds whose rings contain sulfur, oxygen, or nitrogen atoms, as well as on hydrocarbons. The indole ring system is similar to naphthalene except that indole contains a nitrogen in the ring. 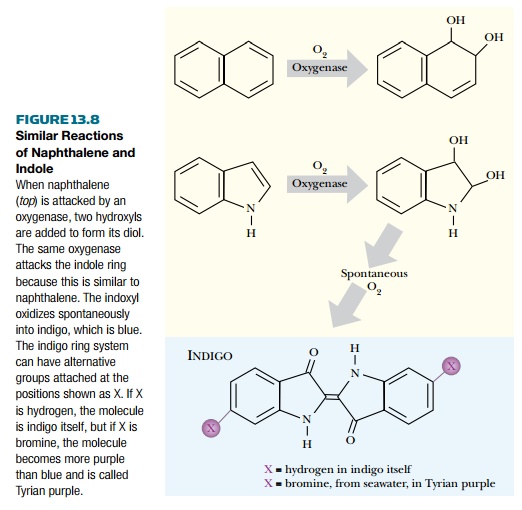 They convert indole to its diol, which oxidizes spontaneously in air to yield indigo, a bright blue pigment. In practice, most aromatic ring dioxygenases attack indole at least to some extent. This allows rapid color screening for the presence of ring dioxygenases, and the presumed aromatic pathways to which they a reddish purple dye, is made by a sea snail called the spiny murex. A related snail, the banded murex, secretes a mixture of Tyrian purple plus indigo, that is, presumably the lost hyacinthine purple. Tyrian purple is very closely related to indigo (Fig. 13.8). It has two bromine atoms, extracted from seawater by the sea snail, on the indigo ring. Both dyes are secreted as colorless precursors that turn blue (or purple) by reacting with the oxygen in air. Indigo itself is used for dyeing wool and cotton blue. Blue jeans are made of cotton dyed with indigo. 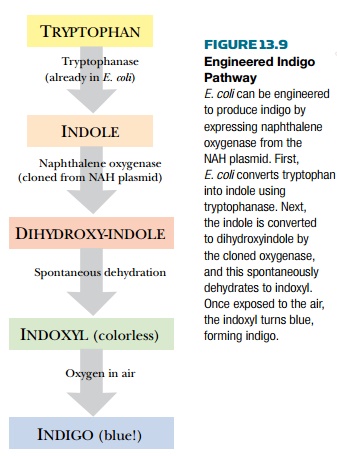 In earlier times, indigo was extracted from plants, but nowadays it is chemically synthesized. Recently, genetically altered bacteria that can make indigo were discovered, largely by accident. The nah genes, carried on the NAH plasmid, encode the enzymes that break down naphthalene. When the nah system was originally analyzed, genes from the NAH plasmid were cloned into E. coli and some of the bacteria turned blue! These blue bacteria turned out to possess the genes for naphthalene oxygenase, the enzyme that carries out the first step in breaking down naphthalene. As discussed earlier, naphthalene oxygenase works very well against indole and converts it into indoxyl. Oxygen in the air converts indoxyl to indigo (see Fig. 13.8). E. coli itself provides the indole by degrading the amino acid tryptophan. Thus the engineered E. coli must be grown in rich medium containing protein hydrolysate or some other source of tryptophan in order to generate indigo (Fig. 13.9). Commercialization of such an engineered pathway would involve putting the recombinant bacteria with the naphthalene oxygenase gene onto a solid support in a bioreactor. Tryptophan would be added at one end and indigo would emerge from the other.