Humans weren’t the first to appreciate alcohol. Elephants, monkeys, and other wild animals deliberately consume fruit that has naturally fermented, yielding alcohol. Indeed, elephants in both Africa and Asia may run amok after consuming fermented fruit. Occasionally, elephants will even raid local villages and knock over houses to “recover” fermented liquids from their human competitors! There is even a species of the fruit fly Drosophila, from the sherry-producing regions of Spain, that relies on sherry as its sole source of nutrition. These insects spend their lives circling around in the caves where sherry is processed and presumably do not need to fly straight. The earliest cultural remains from human alcohol consumption date to about 5000 B.C. Analysis of a yellowish residue found in Neolithic pottery from Iran showed that it was derived from wine. 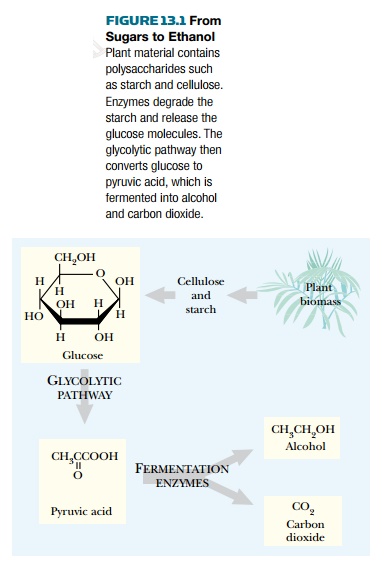 Alcohol is made from sugar (Fig. 13.1). Sugars are components of the carbohydrates making up much of the bulk of plant matter. So, in principle, alcohol can be made from almost any plant-derived material. Yeast is used to ferment sugars derived from grain or grapes, which produces an alcoholic liquid—the basis of beer or wine, respectively. Distillation is then used to make concentrated liquors such as whiskey or vodka. The lone exception to yeast is the use of a bacterium, Zymomonas, which ferments sugar from the sap of the agave plant to give a liquid known as pulque. Distillation converts this into tequila.

There is little need for genetic engineering in the area of alcoholic drinks. However, alcohol may be blended with gasoline to give “gasohol,” which works well in most internal combustion engines. Thus conversion of waste biomass to fuel alcohol would not only get rid of large amounts of waste material but would also reduce gasoline consumption. If the United States converted the 100 million tons of waste paper it generates each year into fuel-grade alcohol, this could replace 15% of the gasoline used. Ethanol can also be made from corn, which is very economical because many acres of corn are grown each year in the United States and a large surplus is generated. Unlike wood pulp for paper, corn can be regenerated in 1 year.

The advantage of using Zymomonas and yeast is that they make only alcohol during fermentation, whereas most microorganisms generate mixtures of fermentation products. For example, Escherichia coli makes a mixture of ethanol, acetate, succinate, lactate, and formate. Although many fermentation products are potentially useful, purification is an expensive drawback. The problem with Zymomonas is that it lives entirely on glucose and lacks the enzymes to break down other sugars, let alone those needed to degrade carbohydrate polymers such as starch and cellulose. Yeast is almost as narrow in its growth requirements. Zymomonas grows faster than yeast and makes alcohol faster as well. On the other hand, yeasts are more alcohol resistant and are therefore capable of accumulating higher concentrations of ethanol in the medium before growth is halted.

Genetic engineering is being used to make improved strains of both yeast and Zymomonas that can use a wider range of sugars. In addition, genes for enzymes capable of breaking down starch, cellulose, or other plant polysaccharides can be inserted (see later discussion). Finally, these organisms can also be engineered for improved resistance to alcohol or for other properties that optimize growth and production under industrial conditions.

Xylose is a five-carbon sugar that is a major component of various polysaccharides (xylans) found in plant cell walls (see later discussion). Vast amounts of waste material from plants are available for possible biodegradation. Breakdown of the polysaccharide polymers would release large amounts of xylose. Consequently, it is worthwhile to develop strains of Zymomonas that efficiently ferment xylose to ethanol. This has been done in two stages.  First the genes for metabolism of xylose itself must be introduced, because Zymomonas does not naturally use this sugar. The xylA and xylB genes encode the enzymes xylose isomerase and xylulose kinase, respectively, which convert xylose to xylulose and then to xylulose 5-phosphate. These two genes were placed on a shuttle vector that carries replication origins for both E. coli, in which the genetic engineering was done, and Zymomonas (Fig. 13.2).

The strain with just the extra xylAB genes grew poorly because it accumulated xylulose 5-phosphate as well as the phosphates of other pentose sugars, including ribose 5-phosphate. The genes for transketolase (tktA) and transaldolase (tal), two enzymes that convert pentose phosphates back into hexose phosphates, were then included on the plasmid, under control of a separate promoter. The resulting Zymomonas was then able to convert xylose first to xylulose 5-phosphate and then to fructose 6-phosphate and glyceraldehyde 3-phosphate. Finally, these central intermediates were fermented efficiently to ethanol (Fig. 13.3). 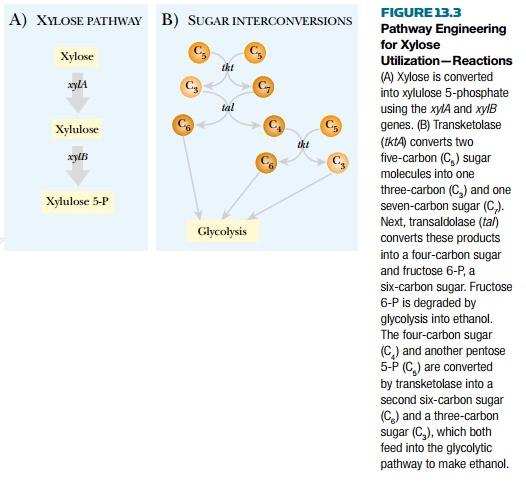