Structure and vitamers - vitamin B12

The term corrinoid is used as a generic descriptor for cobalt-containing compounds of this general struc-ture that, depending on the substituents in the pyrrole rings, may or may not have vitamin activity.

The structure of vitamin B12 is shown in Figure 8.13. The term corrinoid is used as a generic descriptor for cobalt-containing compounds of this general struc-ture that, depending on the substituents in the pyrrole rings, may or may not have vitamin activity. The term “vitamin B12” is used as a generic descriptor for the cobalamins, that is, those corrinoids having the bio-logical activity of the vitamin. Some of the corrinoids that are growth factors for microorganisms not only have no vitamin B12 activity, but may be antimetabo-lites of the vitamin.

Although cyanocobalamin was the first form in which vitamin B12 was isolated, it is not an important naturally occurring vitamer, but rather an artifact due to the presence of cyanide in the charcoal used in the extraction procedure. It is more stable to light than the other vitamers, and hence is used in pharmaceuti-cal preparations. Photolysis of cyanocobalamin in solution leads to the formation of aquocobalamin or hydroxocobalamin, depending on pH. Hydroxoco-balamin is also used in pharmaceutical preparations, and is better retained after parenteral administration than is cyanocobalamin. 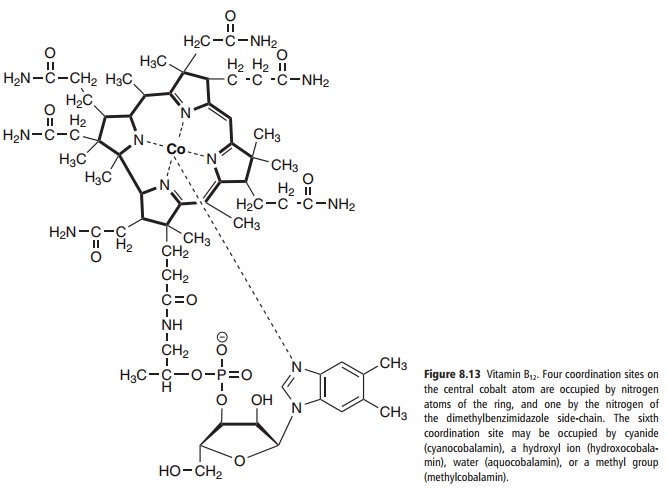 Vitamin B12 is found only in foods of animal origin, although it is also formed by bacteria. There are no plant sources of this vitamin. This means that strict vegetarians (vegans), who eat no foods of animal origin, are at risk of developing dietary vitamin B12 deficiency, although the small amounts of vitamin B12 formed by bacteria on the surface of fruits may be adequate to meet requirements. Prepa-rations of vitamin B12 made by bacterial fermentation that are ethically acceptable to vegans are readily available.

There are claims that yeast and some plants (especially some algae) contain vitamin B12. This seems to be incorrect. The problem is that the officially recog-nized, and legally required, method of determining vitamin B12 in food analysis is a microbiological assay using organisms for which vitamin B12 is an essential growth factor. However, these organisms can also use some corrinoids that have no vitamin activity. There-fore, analysis reveals the presence of something that appears to be vitamin B12, but in fact is not the active vitamin and is useless in human nutrition. Biologi-cally active vitamin B12 has been identified in some preparations of algae, but this seems to be the result of bacterial contamination of the lakes where the algae were harvested.