Metabolic functions of vitamin A and carotenes

The first function of vitamin A to be defined was in vision. More recently, retinoic acid has been shown to have a major function in regulation of gene expres-sion and tissue differentiation.

Metabolic functions of vitamin A and carotenes

The first function of vitamin A to be defined was in vision. More recently, retinoic acid has been shown to have a major function in regulation of gene expres-sion and tissue differentiation.

Vitamin A in vision

In the retina, retinaldehyde functions as the prosthetic group of the light-sensitive opsin proteins, forming rhodopsin (in rods) and iodopsin (in cones). Any one cone cell contains only one type of opsin, and hence is sensitive to only one color of light. Color blindness results from loss or mutation of one or other of the cone opsins.

In the pigment epithelium of the retina, all-trans-retinol is isomerized to 11-cis-retinol and then oxi-dized to 11-cis-retinaldehyde. This reacts with a lysine residue in opsin, forming the holoprotein rhodopsin. As shown in Figure 8.3, the absorption of light by rhodopsin causes isomerization of the retinaldehyde bound to opsin from 11-cis to all-trans, and a confor-mational change in opsin. This results in the release of retinaldehyde from the protein and the initiation of a nerve impulse. The overall process is known as bleach-ing, since it results in the loss of the color of rho-dopsin. The all-trans-retinaldehyde released from rhodopsin is reduced to all-trans-retinol, and joins the pool of retinol in the pigment epithelium for isomeri-zation to 11-cis-retinol and regeneration of rhodop-sin. The key to initiation of the visual cycle is the availability of 11-cis-retinaldehyde, and hence vitamin A. In deficiency both the time taken to adapt to dark-ness and the ability to see in poor light are impaired. 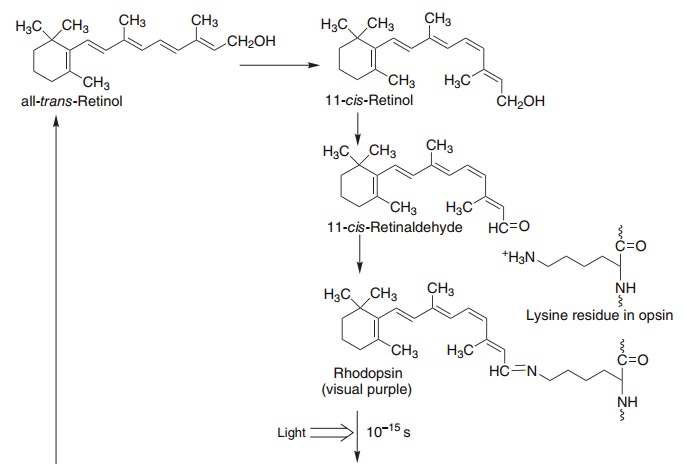 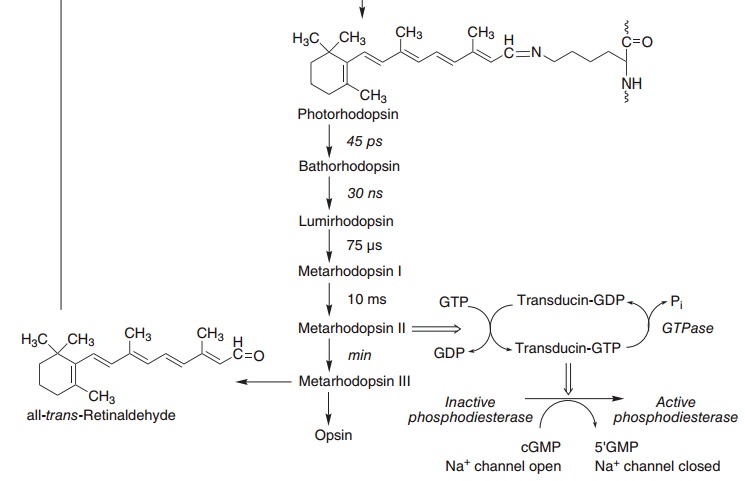 The excited form of rhodopsin (metarhodopsin II) initiates a G-protein cascade leading to hyperpolar-ization of the outer section membrane of the rod or cone, caused by the closure of sodium channels through the membrane, and the initiation of a nerve impulse.

Retinoic acid and the regulation of gene expression

The main function of vitamin A is in the control of cell differentiation and turnover. All-trans-retinoic acid and 9-cis-retinoic acid are active in the regulation of growth, development, and tissue differentiation; they have different actions in different tissues. Like the steroid hormones and vitamin D, retinoic acid interacts with nuclear receptors that bind to response elements (control regions) of DNA, and regulate the transcription of specific genes.

There are two families of nuclear retinoid recep-tors: the retinoic acid receptors (RARs) bind all-trans-retinoic acid or 9-cis-retinoic acid, and the retinoid X receptors (RXRs) bind 9-cis-retinoic acid, and some of the other physiologically active retinoids as well. RXR can form active dimers with RARs, RXRs (homodimers), and the receptors for calcitriol (vitamin D), thyroid hormone, long-chain polyun-saturated fatty acid (PUFA) derivatives [the peroxi-some proliferators-activated receptor (PPAR)], and one for which the physiological ligand has not yet been identified (the COUP receptor).

The result of this is that a very large number of genes are sensitive to control by retinoic acid in different tissues, and at different stages in develop-ment, and retinoic acid is essential for the normal responses to vitamin D, thyroid hormone and long-chain PUFA derivatives.

Unoccupied RXRs can form dimers with calcitriol and other receptors; these bind to hormone response elements on DNA, but do not lead to activation of transcription. This means that vitamin A deficiency will impair responses to vitamin D and thyroid hormone more markedly than might be expected simply from lack of 9-cis-retinoic acid to form active heterodimers.

Vitamin A in excess may also impair responsiveness to vitamin D and other hormones, since high concen-trations of 9-cis-retinoic acid will lead to the forma-tion of RXR–RXR homodimers, leaving too few RXRs to form heterodimers with vitamin D and other receptors. There is epidemiological evidence that habitually high intakes of vitamin A are associated with poor bone health in later life as a result of impaired responsiveness to vitamin D.

The antioxidant function of carotenes

At least in vitro, and under conditions of low oxygen availability, carotenes can act as radical-trapping anti-oxidants. There is epidemiological evidence that high intakes of carotene are associated with a low incidence of cardiovascular disease and some forms of cancer, although the results of intervention trials with β-carotene have been disappointing, with an increased incidence of lung cancer among those taking carotene supplements.