In order to demonstrate that a compound is a vitamin, it is necessary to demonstrate both that deprivation of experimental subjects will lead to the development of a more or less specific clinical deficiency disease and abnormal metabolic signs, and that restoration of the missing compound will prevent or cure the deficiency disease and normalize metabolic abnormalities. It is not enough simply to demonstrate that a compound has a function in the body, since it may normally be synthesized in adequate amounts to meet requirements, or that a compound cures a disease, since this may simply reflect a pharmacological action and not indicate that the compound is a dietary essential.

The vitamins, and their principal functions and deficiency signs, are shown in Table 8.1; the curious nomenclature is a consequence of the way in which they were discovered at the beginning of the twentieth century. Early studies showed that there was some-thing in milk that was essential, in very small amounts, for the growth of animals fed on a diet consisting of purified fat, carbohydrate, protein, and mineral salts.

Two factors were found to be essential: one was found in the cream and the other in the watery part of milk. Logically, they were called factor A (fat-soluble, in the cream) and factor B (water-soluble, in the watery part of the milk). Factor B was identified chemically as an amine, and in 1913 the name “vitamin” was coined for these “vital amines.” 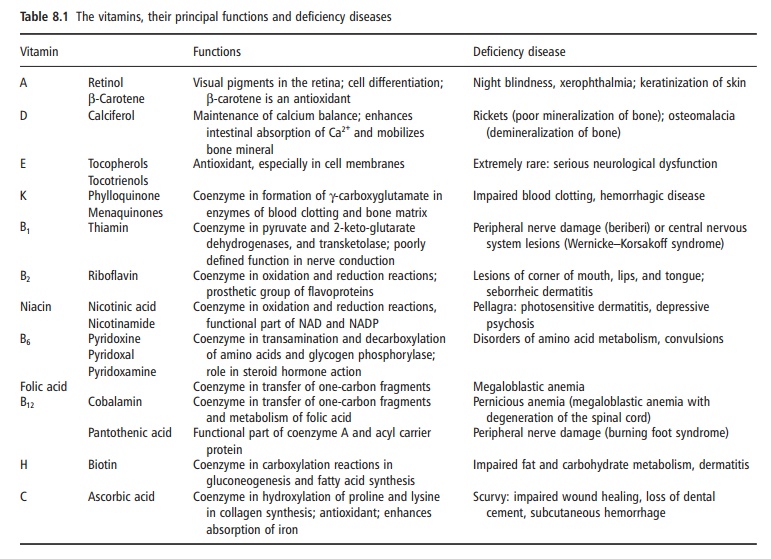 Further studies showed that “vitamin B” was a mixture of a number of compounds, with different actions in the body, and so they were given numbers as well: vitamin B1, vitamin B2, and so on. There are gaps in the numerical order of the B vitamins. When what might have been called vitamin B3 was discovered, it was found to be a chemical compound that was already known, nicotinic acid. It was therefore not given a number. Other gaps are because compounds that were assumed to be vitamins and were given numbers, such as B4 and B5, were later shown either not to be vitamins, or to be vitamins that had already been described by other workers and given other names.

Vitamins C, D and E were named in the order of their discovery. The name “vitamin F” was used at one time for what we now call the essential fatty acids; “vitamin G” was later found to be what was already known as vitamin B2. Biotin is still sometimes called vitamin H. Vitamin K was discovered by Henrik Dam, in Denmark, as a result of studies of disorders of blood coagulation, and he named it for its function: koagulation in Danish.

As the chemistry of the vitamins was elucidated, so they were given names as well, as shown in Table 8.1. When only one chemical compound has the biologi-cal activity of the vitamin, this is quite easy. Thus, vitamin B1 is thiamin, vitamin B2 is riboflavin, etc. With several of the vitamins, a number of chemically related compounds found in foods can be intercon-verted in the body, and all show the same biological activity. Such chemically related compounds are called vitamers, and a general name (a generic descrip-tor) is used to include all compounds that display the same biological activity.

Some compounds have important metabolic func-tions, but are not considered to be vitamins, since, as far as is known, they can be synthesized in the body in adequate amounts to meet requirements. These include carnitine, choline, inositol, taurine, and ubiquinone.

Two compounds that are generally considered to be vitamins can be synthesized in the body, normally in adequate amounts to meet requirements: vitamin D, which is synthesized from 7-dehydrocholesterol in the skin on exposure to sunlight, and niacin, which is synthesized from the essential amino acid tryptophan. However, both were discovered as a result of studies of deficiency diseases that were, during the early twentieth century, significant public health problems: rickets (due to vitamin D deficiency and inadequate sunlight exposure) and pellagra (due to deficiency of both tryptophan and preformed niacin).