Vitamin D is absorbed in lipid micelles and incorporated into chylomicrons;

Vitamin D is absorbed in lipid micelles and incorporated into chylomicrons; therefore, people on a low-fat diet will absorb little of such dietary vitamin D as is available. Indeed, it is noteworthy that at the time that rickets was a major public health problem in Scotland, herrings (a rich source) were a significant part of the diet: it can only be assumed that the diet was so low in fat that the absorption of the vitamin was impaired.

Synthesis of vitamin D in the skin

As shown in Figure 8.4, the steroid 7-dehydrocholes-terol (an intermediate in the synthesis of cholesterol that accumulates in the skin but not other tissues) undergoes a non-enzymic reaction on exposure to UV light, yielding previtamin D, which undergoes a further reaction over a period of hours to form cho-lecalciferol, which is absorbed into the bloodstream. 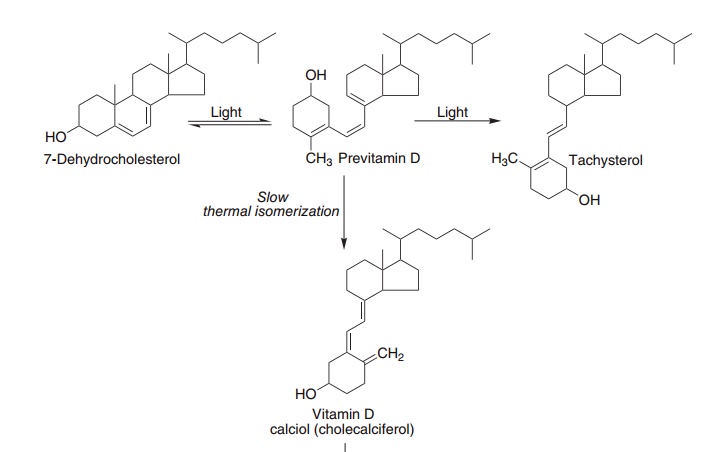 In temperate climates there is a marked seasonal variation in the plasma concentration of vitamin D; it is highest at the end of summer and lowest at the end of winter. Although there may be bright sunlight in winter, beyond about 40° N or S there is very little UV radiation of the appropriate wavelength for cho-lecalciferol synthesis when the sun is low in the sky. By contrast, in summer, when the sun is more or less overhead, there is a considerable amount of UV light even on a moderately cloudy day, and enough can penetrate thin clothes to result in significant forma-tion of vitamin D.

In northerly climates, and especially in polluted industrial cities with little sunlight, people may well not be exposed to enough UV light to meet their vitamin D needs, and they will be reliant on the few dietary sources of the vitamin.

Cholecalciferol, either synthesized in the skin or from foods, undergoes two hydroxylations to yield the active metabolite, 1,25-dihydroxyvitamin D or cal-citriol, as shown in Figure 8.4. Ergocalciferol from fortified foods undergoes similar hydroxylation to yield ercalcitriol. The nomenclature of the vitamin D metabolites is shown in Table 8.3. 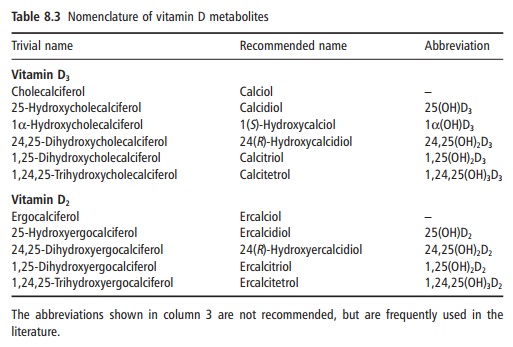 The first stage in vitamin D metabolism occurs in the liver, where it is hydroxylated to form the 25-hydroxy derivative calcidiol. This is released into the circulation bound to a vitamin D binding globulin. There is no tissue storage of vitamin D; plasma cal-cidiol is the main storage form of the vitamin, and it is plasma calcidiol that shows the most significant seasonal variation in temperate climates.

The second stage of vitamin D metabolism occurs in the kidney, where calcidiol undergoes either 1-hydroxylation to yield the active metabolite 1,25-dihydroxyvitamin D (calcitriol) or 24-hydroxylation to yield an apparently inactive metabolite, 24,25-dihydroxyvitamin D (24-hydroxycalcidiol). Calcidiol 1-hydroxylase is also found in other tissues that are capable of forming calcitriol as an autocrine or para-crine agent.