Metabolism and storage of vitamin A and pro-vitamin A carotenoids

Retinol is absorbed from the small intestine dissolved in lipid.

Metabolism and storage of vitamin A and pro-vitamin A carotenoids

Retinol is absorbed from the small intestine dissolved in lipid. About 70–90% of dietary retinol is normally absorbed, and even at high levels of intake this falls only slightly. However, in people with a very low fat intake (less than about 10% of energy from fat), absorption of both retinol and carotene is impaired, and low-fat diets are associated with vitamin A deficiency.

Dietary retinyl esters are hydrolyzed by lipases in the intestinal lumen and mucosal brush border mem-brane, then re-esterified to form retinyl palmitate before release into the circulation in chylomicrons.

The main pathway for catabolism of retinol is oxidation to retinoic acid (which, as discussed below, has important biological activities in its own right, distinct from the activities of retinol). The main excretory product of both retinol and retinoic acid is retinoyl glucuronide, which is secreted in the bile.

As the intake of retinol increases, and the liver con-centration rises above 70 μmol/kg, a different pathway becomes increasingly important for the catabolism of retinol in the liver. This is a microsomal cytochrome P450-dependent oxidation, leading to a number of polar metabolites that are excreted in the urine and bile. At high intakes this pathway becomes saturated, and excess retinol is toxic since there is no further capacity for its catabolism and excretion.

Like retinol, carotenoids are absorbed dissolved in lipid micelles. The biological availability and absorp-tion of dietary carotene varies between 5% and 60%, depending on the nature of the food, whether it is cooked or raw, and the amount of fat in the meal.

As shown in Figure 8.2, β-carotene and other pro-vitamin A carotenoids are cleaved in the intestinal mucosa by carotene dioxygenase, yielding retinalde-hyde, which is reduced to retinol, then esterified and secreted in chylomicrons together with retinyl esters formed from dietary retinol. 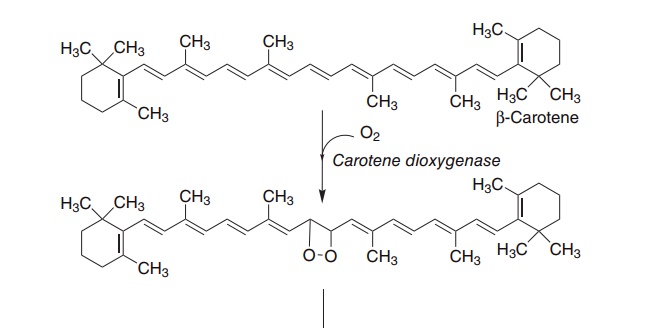 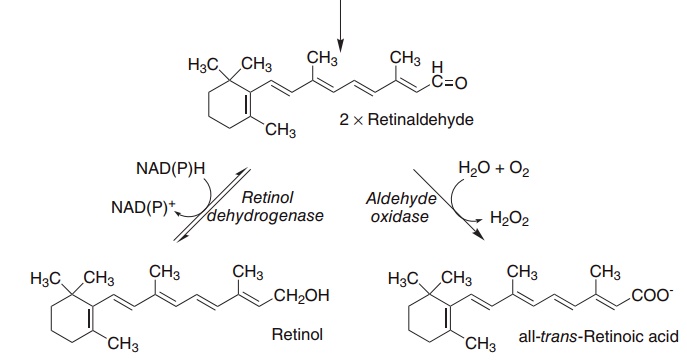 Only a proportion of carotene undergoes oxidation in the intestinal mucosa, and a significant amount of carotene enters the circulation in chylomicrons. Caro-tene in the chylomicron remnants is cleared by the liver; some is cleaved by hepatic carotene dioxygenase, again giving rise to retinaldehyde and retinyl esters; the remainder is secreted in very low-density lipopro-teins (VLDLs), and may be taken up and cleaved by carotene dioxygenase in other tissues.

Central oxidative cleavage of β-carotene, as shown in Figure 8.2, should yield two molecules of retinal-dehyde, which can be reduced to retinol. However, as noted above, the biological activity of β-carotene, on a molar basis, is considerably lower than that of retinol, not twofold higher as might be expected. In addition to poor absorption of carotene, three factors may account for this.

●The intestinal activity of carotene dioxygenase is

relatively low, so that a relatively large proportion of ingested β-carotene may be absorbed unchanged.

●Other carotenoids in the diet may inhibit carotene dioxygenase and reduce the formation of retinol.

The principal site of carotene dioxygenase attack is the central bond of β-carotene, but asymmetric cleavage also occurs, leading to the formation of 8′-,10′- and 12′-apo-carotenals, which are oxidized to yield retinoic acid, but are not precursors of retinol or retinaldehyde.

Retinol is released from the liver bound to an α-globulin, retinol binding protein (RBP); this serves to maintain the vitamin in aqueous solution, protects it against oxidation and delivers the vitamin to target tissues. RBP is secreted from the liver as a 1:1 complex with the thyroxine-binding prealbumin, transthy-retin. This is important to prevent urinary loss of retinol bound to the relatively small RBP, which would otherwise be filtered by the kidney, with a consider-able loss of vitamin A from the body.

Cell surface receptors on target tissues take up retinol from the RBP–transthyretin complex, trans-ferring it on to an intracellular RBP. The receptors also remove the carboxy-terminal arginine residue from RBP, so inactivating it by reducing its affinity for both transthyretin and retinol. As a result, apo-RBP is filtered at the glomerulus; most is reabsorbed in the proximal renal tubules and hydrolyzed. The apopro-tein is not recycled.

During the development of vitamin A deficiency in experimental animals, the plasma concentration of RBP falls, whereas the liver content of apo-RBP rises. The administration of retinol results in release of holo-RBP from the liver. This provides the basis of the relative dose–response (RDR) test for liver reserves of vitamin A .