Antibodies are “natural targeting devices.” Their homing ability is combined with functional activity (Crommelin and Storm, 1990; Crommelin et al., 1992). MAb can affect the target cell function upon attach-ment. Complement can be bound via the Fc receptor and subsequently cause lysis of the target cell. Alternatively, certain Fc receptor-bearing killer cells can induce “antibody dependent, cell-mediated cyto-toxicity” (ADCC), or contact with macrophages can be established. Moreover, metabolic deficiencies can beinduced in the target cells through a blockade of certain essential cell surface receptors by MAb.

A problem that occurs when using murine antibodies for therapy is the production of human anti-mouse antibodies (HAMA) after administration. HAMA induction may prohibit further use of these therapeutic MAb by neutralizing the antigen-binding site; anaphylactic reactions are relatively rare. Concurrent administration of immunosuppressive agents is a strategy to minimize side effects. More in depth information regarding immunogenicity of therapeutic proteins is provided.

There are several other ways to cope with this MAb-induced immunogenicity problem.. Here, a brief summary of the options relevant for protein targeting suffices. First of all, the use of F(ab)2 or F(ab) fragments (Fig. 27) avoids raising an immune response against the Fc part, but the development of humanized or human MAb minimizes the induction of HAMA even further. For humanization of MAb several options can be considered. One can build chimeric (partly human, partly murine) molecules consisting of a human Fc part and a murine Fab part, with the antigen binding sites or, alternatively, only the six complementarity determining regions (CDRs) of the murine antibody can be grafted in a human antibody structure. CDR grafting minimizes the exposure to murine material. 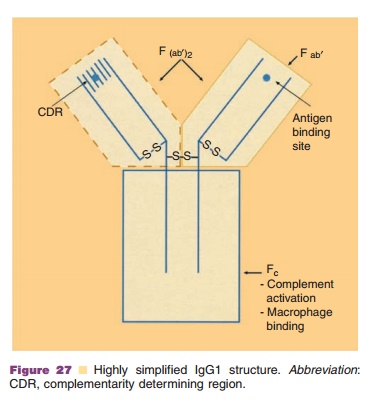 Completely human MAb can be produced by transfecting human antibody genes into mouse cells, which subsequently produce the human MAb. Alternatively, transgenic mice can be used. These approaches reduce the immunogenicity compared to the existing generation of murine MAb. But even with all these human or humanized MAb, anti-idiotypic immune responses against the binding site structure of the MAb cannot be excluded.

Bispecific antibodies have been used experi-mentally in the clinic, for instance, to direct intraper-itoneally injected autologous T-lymphocytes, stimulated with recombinant interleukin-2, to intra-peritoneally located ovarian carcinoma cells. This MAb combines an antigen-binding site for a carcino-ma-surface antigen with an antigen-binding site with T-cell affinity. The MAb are in vitro incubated with the stimulated T-lymphocytes prior to IP injection (Crommelin et al., 1992; De Leij et al., 1990).

Immuno conjugates: Combinations between an Antibody and an Active Compound

In many cases antibodies alone or bispecific anti-bodies have been shown to lack sufficient therapeutic activity. To enhance their activity, conjugates of MAb and drugs have been designed (Fig. 28). These efforts mainly focus on the treatment of cancer (Crommelin and Storm, 1990). To test the concept of immunocon-jugates, a wide range of drugs has been covalently bound to antibodies and has been evaluated in animal tumor models. As only a limited number of antibody molecules can bind to the target cells, only conjuga-tion of highly potent drugs will lead to sufficient therapeutic activity. Gemtuzumab ozogamicin (Mylotarg ) is a conjugate of a monoclonal antibody and calicheamicin . The MAb part targets the CD33 surface antigen in CD33-positive acute myeloid leukemia cells (AML). After internali-zation into the cell the highly cytotoxic calicheamicin is released. 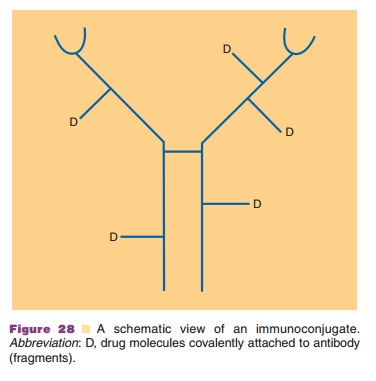 Cytostatics with a high intrinsic cytotoxicity are needed (see above). Because the kinetic behavior of active compounds is strongly affected by the conjugating antibody, not only existing cytostatics, but also active compounds that were never used before as drugs, because of their high toxicity, should now be reconsidered.

Immunoconjugated toxins are now tested as chemotherapeutic agents to treat cancer (immunotox-ins). Examples of the toxin family are ricin, abrin, and diphtheria toxin (Fig. 29). These proteins are extre-mely toxic; they block enzymatically intracellular protein synthesis at the ribosomal level. Ricin (MW 66 kDa) consists of an A and a B chain that are linked through a cystin bridge. The A chain is responsible for blocking protein synthesis at the ribosomes. The B chain is important for cellular uptake of the molecule (endocytosis) and intracellular trafficking. 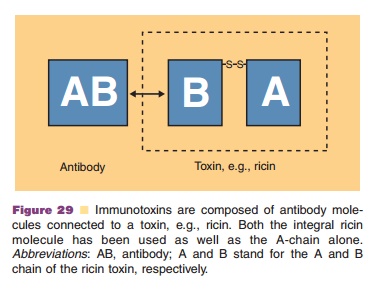 Table 13 lists a number of potential problems encountered with toxin-based immunoconjugates (Crommelin et al., 1992). In animal studies with immunoconjugated ricin only a small fraction of these immunotoxins accumulates in tumor tissue (1%). A major fraction still ends up in the liver, the main target organ for “natural” ricin. Moreover, in clinical phase I studies (to assess the safety of the conjugates) the first generation of immunoconjugates turned out to be immunogenic. Now, attempts are being made to adapt the ricin molecule (by genetic engineering) so that liver targeting is being mini-mized. This can be done by blocking (removing or masking) on the ricin molecule ligands for galactose receptors on hepatocytes. Besides, murine MAb can be replaced by human or humanized MAb (see above) (Ramakrishnan, 1990). 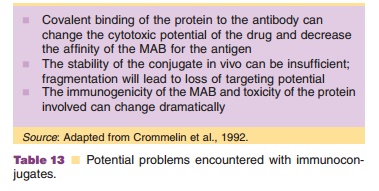