Delivery of Proteins: Routes of Administration and Absorption Enhancement

DELIVERY OF PROTEINS: ROUTES OF ADMINISTRATION AND ABSORPTION ENHANCEMENT

The Parenteral Route of Administration

Parenteral administration is here defined as adminis-tration via those routes where a needle is used, including intravenous (IV), intramuscular (IM), sub-cutaneous (SC) and intraperitoneal (IP) injections. More information on the pharmacokinetic behavior of recombinant proteins is provided. It suffices here to state that the blood half-life of biotech products can vary over a wide range. For example, the circulation half-life of t-PA is a few minutes, while monoclonal antibodies (MAb) reportedly have half-lives of a few days. Obviously, one reason to develop modified proteins through site directed mutagenesis is to enhance circulation half-life. A simple way to expand the mean residence time for short half-life proteins is to switch from IV to IM or SC administra-tion. One should realize that by doing that, changes in disposition may occur, with a significant impact on the therapeutic performance of the drug. These changes are related to: (i) the prolonged residence time at the IM or SC site of injection compared to IV administration and the enhanced exposure to degra-dation reactions (peptidases) and (ii) differences in disposition.

Regarding point 1: Prolonged residence time atthe IM or SC site of injection and the enhanced exposure to degradation reactions. For instance, diabetics can become “insulin resistant” through high tissue peptidase activity (Maberly et al., 1982). Other factors that can contribute to absorption variation are related to differences in exercise level of the muscle at the injection site and also massage and heat at the injection site. The state of the tissue, for instance the occurrence of pathological conditions, may be im-portant as well.

Regarding point 2: Differences in disposition.Upon administration, the protein may be transported to the blood through the lymphatics or may enter the blood circulation through the capillary wall at the site of injection (Figs. 11 and 12). The fraction of the administered dose taking this lymphatic route is molecular weight dependent (Supersaxo et al., 1990). Lymphatic transport takes time (hours) and uptake in the blood circulation is highly dependent on the injection site. On its way to the blood, the lymph passes through draining lymph nodes and contact is possible between lymph contents and cells of the immune system such as macrophages, B- and T-lymphocytes residing in the lymph nodes. 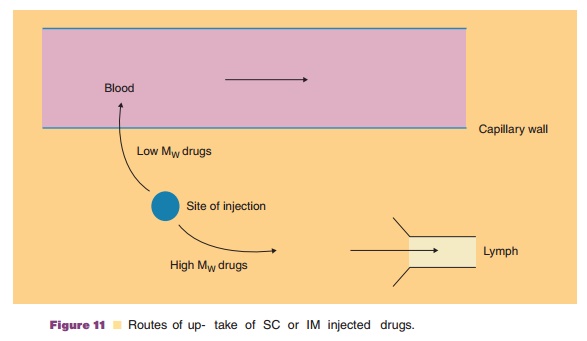 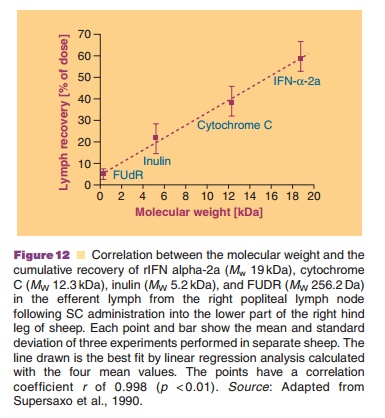 The Oral Route of Administration

Oral delivery of protein drugs would be preferable, because it is patient friendly and no intervention by a healthcare professional is necessary to administer the drug. Oral bioavailability, however, is usually very low. The two main reasons for this failure of uptake are: (i) protein degradation in the gastrointestinal (GI) tract and (ii) poor permeability of the wall of the GI tract in case of a passive transport process (Lee et al., 1991).

Parenteral administration has disadvantages (needles, sterility, injection skills) compared to other possible routes. Therefore, systemic delivery of recombinant proteins by alternative routes of administration (apart from the GI tract, discussed above) has been studied extensively. The nose, lungs, rectum, oral cavity, and skin have been selected as potential sites of applica-tion. The potential pros and cons for the different relevant routes are listed in Table 4 (Zhou and Li Wan Po, 1991a; Zhou and Li Wan Po, 1991b). 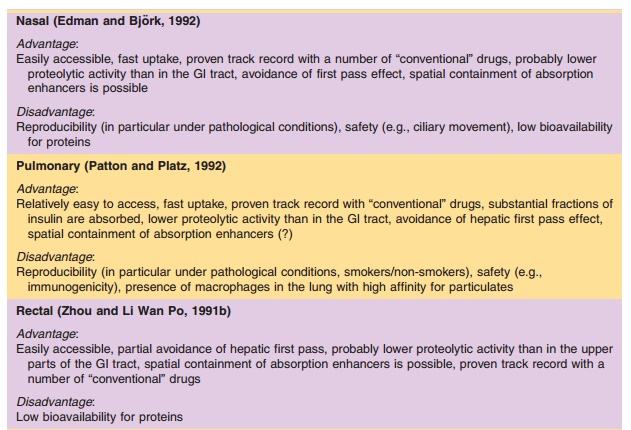 The nasal, buccal, rectal, and transdermal routes all have been shown to be of little clinical relevance if systemic action is required, and if simple proteinformulations without an absorption enhancing tech-nology are used. In general, bioavailability is too low and varies too much! The pulmonary route may be the exception to this rule. Table 5 (from Patton et al., 1994) presents the bioavailability in rats of intratracheally administered protein solutions with a wide range of molecular weights. Absorption was strongly protein dependent, with no clear relationship with its molecular weight. 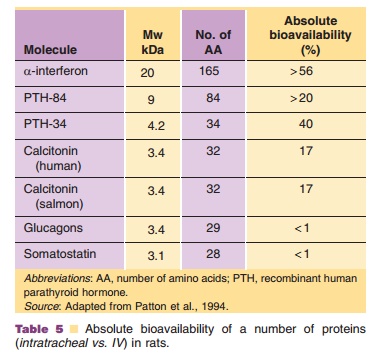 In humans the drug should be inhaled instead of intratracheally adminstered. The delivery of insulin to Type I (juvenile onset) and Type II (adult onset) diabetics has been extensively studied and clinical phase III trials evaluating efficacy and safety have been performed or are ongoing (Patton et al., 1999). The first pulmonary insulin formulation was approved by FDA in January 2006 (Exubera ). Pulmonary inhalation of insulin is specifically tested for meal time glucose control. Uptake of insulin is faster than after a regular SC insulin injection (peak 5–60 minutes versus 60–180 minutes). The reprodu-cibility of the blood glucose response to inhaled insulin was equivalent to SC injected insulin, but patients preferred inhalation over SC injection. Inhalation technology plays a critical role when considering the prospects of the pulmonary route for the systemic delivery of therapeutic proteins. Dry powder inhalers and nebulizers are being tested. The fraction of insulin that is ultimately absorbed depends on: (i) the fraction of the inhaled/nebulized dose that is actually leaving the device, (ii) the fraction that is actually deposited in the lung, and (iii) the fraction that is being absorbed, i.e., total relative uptake (TO %) ¼ % uptake from device % deposited in the lungs % actually absorbed from the lungs. TO % for insulin is estimated to be about 10% (Patton et al., 2004). The fraction of insulin that is absorbed from the lung is estimated to be around 20%. These figures demonstrate that insulin absorp-tion via the lung may be a promising route; but the fraction absorbed is small. 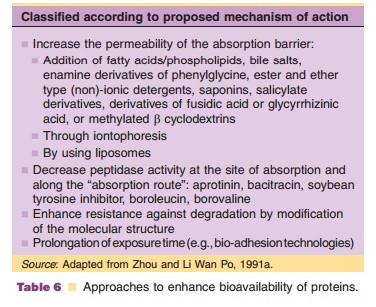 Therefore, different approaches have been eval-uated to increase bioavailability of the pulmonary and other non-parenteral routes of administration. The goal is to develop a system that temporarily decreases the absorption barrier resistance with minimum and acceptable safety concerns. The mechanistic back-ground of these approaches is given in Table 6. Until now, no products utilizing one of these approaches have successfully passed clinical test programs. Safety concerns are an important hurdle. Questions center on the specificity and reversibility of the protein permea-tion enhancing effect and the toxicity. 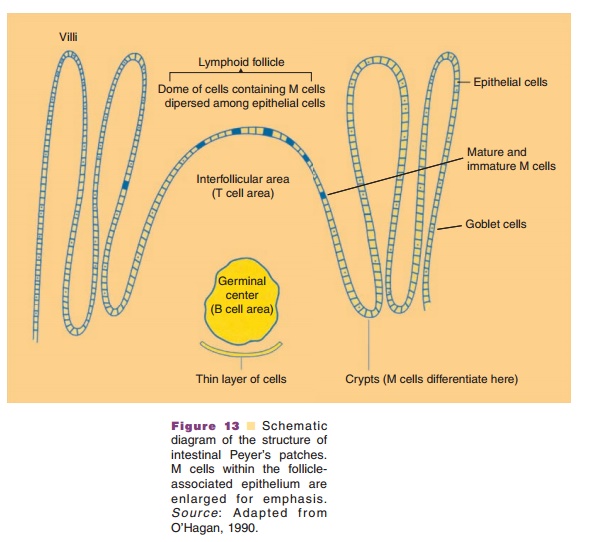 The following section deals with the “state of the art” of this important issue: absorption enhancement and non-parenteral administration of recombinant proteins. A number of typical examples are provided. 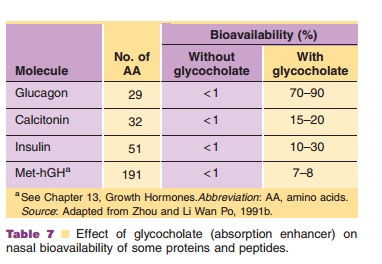 Table 7 presents an example of the (apparently complex) relationship between nasal bioavailability of some peptide and protein drugs, their molecular weight and the presence of the absorption enhancer glycocholate (Zhou and Li Wan Po, 1991b).

Figure 14 (Bjo¨rk and Edman, 1988) illustrates another case where degradable starch microspheres loaded with insulin were used and where changes in glucose levels were monitored after nasal admin-istration to rats. 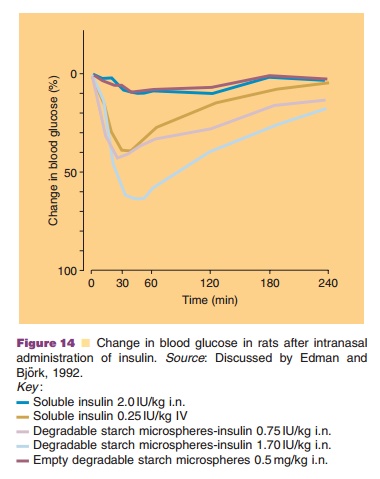 Figure 16 presents the plasma profile of growth hormone releasing factor, GRF (44 amino acids, MW 5 kDa after SC, IV, and iontophoretic transdermal delivery to hairless guinea pigs. A prolonged appear-ance of GRF in the plasma can be observed. Iontophoretic delivery offers interesting opportunities if pulsed delivery of the protein is required. The device can be worn permanently and only switched on for the desired periods of time, simulating pulsatile secretion of endogenous hormones such as growth hormone and insulin. 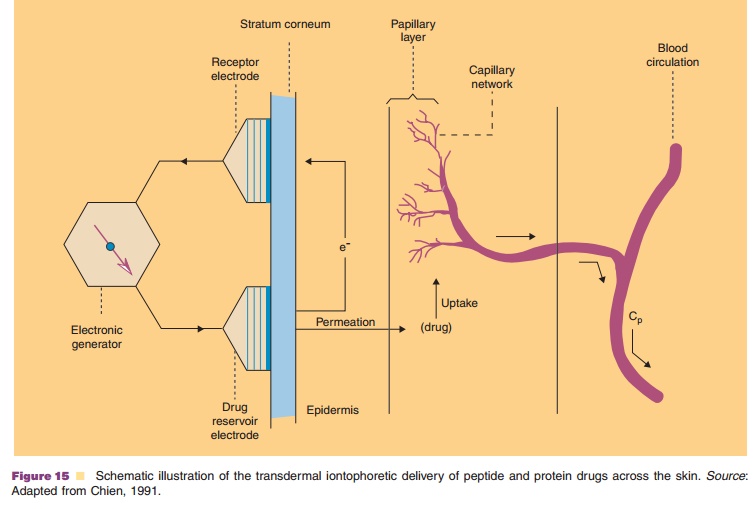 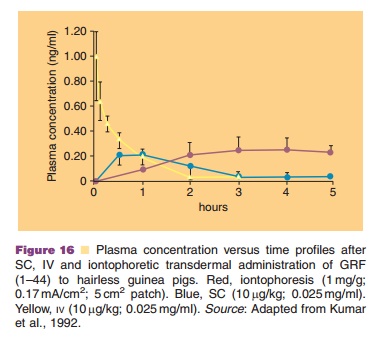