Anti-adsorption agents are added to reduce adsorp-tion of the active protein to interfaces. Some proteins tend to expose hydrophobic sites, normally present in the core of the native protein structure when an interface is present.

Anti-adsorption agents are added to reduce adsorp-tion of the active protein to interfaces. Some proteins tend to expose hydrophobic sites, normally present in the core of the native protein structure when an interface is present. These interfaces can be water/air, water/container wall or interfaces formed between the aqueous phase and utensils used to administer the drug (e.g., catheter, needle). These adsorbed, partially unfolded protein molecules form aggregates, leave the surface, return to the aqueous phase, form larger aggregates and precipitate. As an example, the proposed mechanism for aggregation of insulin in aqueous media through contact with a hydrophobic surface (or water–air interface) is presented in Figure 3 (Thurow and Geisen, 1984). 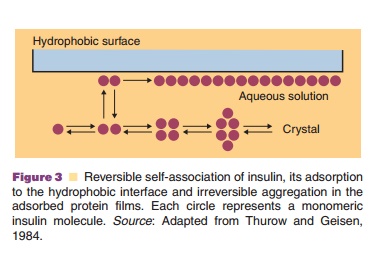 Native insulin in solution is in an equilibrium state between monomeric, dimeric tetrameric, and hexameric forms. The relative abundance of the different aggregation states depends on the pH, insulin concentration, ionic strength, and specific excipients (e.g., Zn2þ and phenol). It has been suggested that the dimeric form of insulin adsorbs to hydrophobic interfaces and subsequently forms larger aggregates at the interface. This explains why anti-adhesion agents can also act as anti-aggregation agents. Albumin has a strong tendency to adsorb to surfaces and is therefore added in relatively high concentrations (e.g., 1%) to protein formulations as an anti-adhesion agent. Albumin competes with the therapeutic protein for binding sites and supposedly prevents adhesion of the therapeutically active agent by a combination of its binding tendency and abundant presence.

Insulin is one of the many proteins that can form fibrillar precipitates (long rod-shaped structures with diameters in the 0.1 mm range). Low concentrations of phospholipids and surfactants have been shown to exert a fibrillation-inhibitory effect. The selection of the proper pH can also help to prevent this unwanted phenomenon (Brange and Langkjaer, 1993).

Apart from albumin, surfactants can also pre-vent adhesion to interfaces and precipitation. These molecules readily adsorb to hydrophobic interfaces with their own hydrophobic groups and render this interface hydrophilic by exposing their hydrophilic groups to the aqueous phase.