Why are we still not able to beat life-threatening diseases such as cancer with our current arsenal of drugs? Causes of failure can be summarized as follows (:

Why are we still not able to beat life-threatening diseases such as cancer with our current arsenal of drugs? Causes of failure can be summarized as follows (Crommelin et al., 1992):

(1) The active compound never reaches the target site, because it is rapidly eliminated intact from the body through the kidneys, or it is inactivated through metabolic action (e.g., in the liver).

Attempts are made to increase the therapeutic index of drugs through drug targeting:

(1) by specific delivery of the active compound to its site of action,

(2) to keep it there until it has been inactivated and detoxified.

Targeted drug delivery should maximize the therapeutic effect and avoid toxic effects elsewhere. The basics of the concept of drug targeting were defined already in the early days of the 20th century by Paul Ehrlich. But only in the last decade substantial progress has been made to implement this site-specific delivery concept. Recent progress can be ascribed to: (i) the rapidly growing number of technological options (e.g., safe carriers) for drug delivery; (ii) many new insights gained into the pathophysiology of diseases at the cellular and molecular level, including the presence of cell-specific receptors and homing devices to target them (e.g., MAb); and finally, (iii) new revelations on the nature of the anatomical and physiological barriers that hinder easy access to target sites. The site-specific delivery systems presently in different stages of development generally consist of three functionally separate units (Table 11).

Nature has provided us with antibodies, which exemplify a class of natural drug targeting devices. In an antibody molecule one can recognize a homing device part (antigen binding site) and “active” parts. These active parts in the molecule are responsible for participating in the complement cascade, or inducing interactions with monocytes when antigen is bound. The rest of the molecule can be considered as carrier.

Most of the drug (protein) targeting work is performed with delivery systems that are designed for parenteral and, more specifically, IV delivery. Only a limited number of papers have dealt with the pharmacokinetics of the drug targeting process (Hunt et al., 1986). From these kinetic models a number of conclusions could be drawn for situations where targeted delivery is, in principle, advantageous (Table 12). 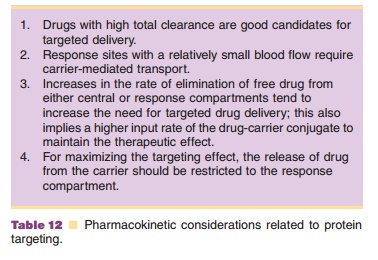 The potential and limitations of carrier-based, targeted drug delivery systems for proteins are briefly discussed. The focus is on concepts where MAb are being used. They can be used as the antibody itself, in modified form when anti-bodies are conjugated with an active moiety, or attached to drug-laden colloidal carriers such as liposomes.

Two terms are regularly used in the context of targeting: passive and active targeting. With passive targeting the “natural” disposition pattern of the carrier system is utilized for site-specific delivery. For instance, particulate carriers circulating in the blood (see below) are often rapidly taken up by macrophages in contact with the blood circulation and accumulate in liver (Kupffer cells) and spleen. Active targeting is the concept where attempts are made to change the natural disposition of the carrier by some sort of homing device or homing principle to select one particular tissue or cell type.