Rate control can be achieved by several different technologies similar to those used for “conventional” drugs. Insulin is an excellent example. A spectrum of options is available and accepted: different types of suspensions and continuous infusion systems are marketed. Moreover, chemical approaches can be used to change protein characteristics. Polyoxyethylene glycol attachment to proteins changes their circulation half-life in blood dramatically. Figure 17 shows an example of this approach. 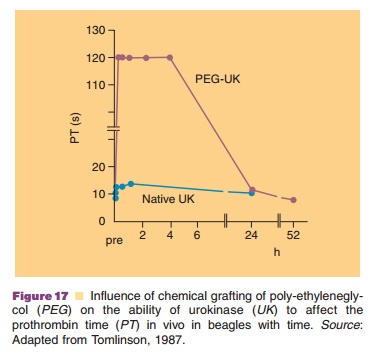 In general, proteins are administered as an aqueous solution. Only recombinant vaccines and most insulin formulations are delivered as (colloidal) dis-persions. At the present time, insulin is routinely and clinically applied through some form of controlled release system  other than through continuous infusion. As experience with biotech drugs grows, more advanced technologies will definitely be introduced to optimize the therapeutic benefit of the drug. Table 9 lists some of the technologically feasible options. They are briefly touched upon below. 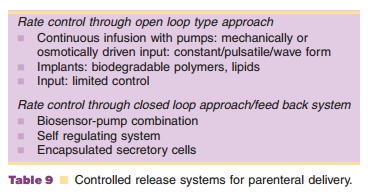 Mechanically driven pumps are common tools to administer drugs intravenously in hospitals (continuous infusion, open-loop type). They are available in different kinds of sizes/prices, portable or not, inside/outside the body, etc. Table 10 presents a checklist of issues to be considered when selecting the proper pump. 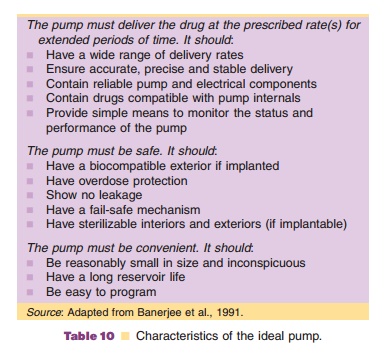 Controlled administration of a drug does not necessarily imply a constant input rate. Pulsatile or variable-rate delivery is the desired mode of input for a number of protein drugs, and for these drugs pumps should provide flexible input rate characteristics. Insulin is a prime example of a protein drug, where there is a need to adjust the input rate to the needs of the body. Today by far most experience with pump systems in an ambulatory setting has been gained with this drug. The pump system may fail because of energy failure, problems with the syringe, accidental needle withdrawal, leakage of the catheter and problems at the injection or implantation site (Banerjee et al., 1991). Moreover, long-term drug stability may become a problem. The protein should be stable at 37 C or ambient temperature (internal and external device, respectively) between two refills. Finally, even with high tech pump systems, the patient still has to collect data to adjust the pump rate. This implies invasive sampling from body fluids on a regular basis, followed by calculation of the required input rate. This problem would be solved if the concept of closed-loop systems would be realized (feedback systems, see below).

The subcutaneously implantable, osmotic mini-pump developed by ALZA (Alzet minipump, Fig. 18) (Banerjee et al., 1991)) has proven to be useful in animal experiments where continuous, constant infu-sion is required over prolonged periods of time. The rate determining process is the influx of water through the rigid, semi-permeable external mem-brane. The incoming water empties the drug-contain-ing reservoir (solution or dispersion) surrounded by a flexible impermeable membrane. The release rate depends on the characteristics of this semi-permeable membrane and on osmotic pressure differences over this membrane (osmotic agents inside the pump). Zero-order release kinetics exists as long as the osmotic pressure difference over the semi-permeable membrane is maintained constant. 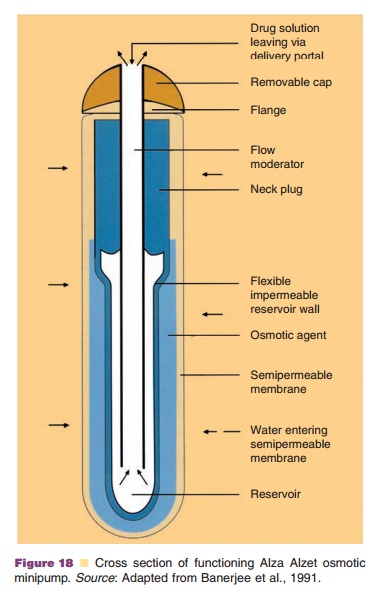 The protein solution (or dispersion) must be physically and chemically stable at body temperature over the full term of the experiment. Moreover, the protein solution must be compatible with the pump parts to which it is exposed. A limitation of the system is the fixed release rate, which is not always desired (see above). These devices have currently not been used on a regular basis in the clinic.

Polylactic acid–polyglycolic acid (PLGA)-based deliv-ery systems are being used extensively for the delivery of therapeutic peptides, in particular lutei-nizing hormone-releasing hormone (LHRH) agonists such as leuprolide in the therapy of prostate cancer. The first LHRH agonist controlled release formula-tions were implants containing leuprolide with dose ranges of 1–3 months. Later, microspheres loaded with leuprolide were introduced and dosing intervals were prolonged to up to 6 months. Critical success factors for the design of these controlled release systems are: (i) the drug has to be highly potent (only a small dose is required over the dosing interval), (ii) a sustained presence in the body is required, and (iii) no adverse reactions at the injection site should occur.

New strategies for controlled release of thera-peutic proteins are presently under development. For example, Figures 19 and 20 describe a dextran-based microsphere technology for SC or IM administration that often has an almost 100% protein encapsulation efficiency (Fig. 19). Here, no organic solvents are being 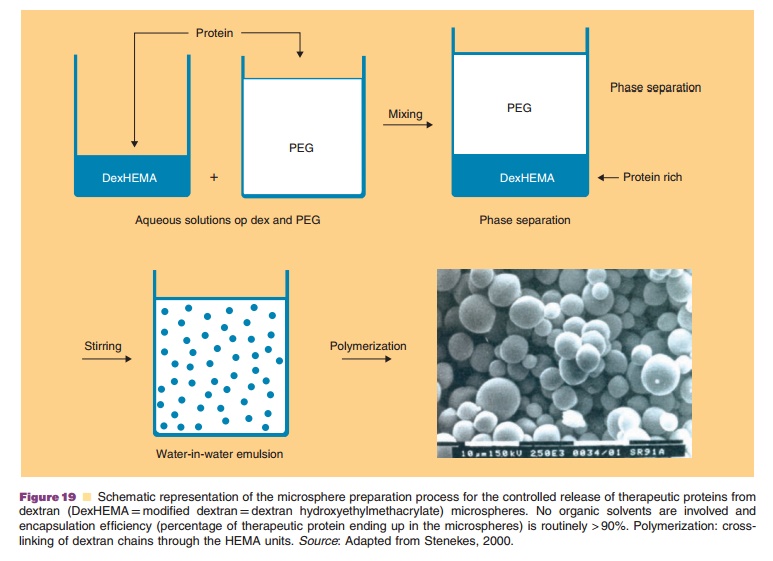 used in the preparation protocol. Thus, a direct interaction of the dissolved protein with an organic phase (as seen in many polymeric microsphere preparation schemes) is avoided. This minimizes denaturation of the protein. Figure 20 shows that by selecting the proper cross-linking conditions one has a degree of control over the release kinetics. Release kinetics are mainly dependent on degradation kinetics of the dextran matrix and size of the protein molecule (Stenekes, 2000). Another approach for prolonged and controlled release of therapeutic proteins is to use microspheres based on another biodegradable hydro-gel material. PolyActiveTM is a block-copolymer consisting of polyethylene glycol (PEG) blocks and polybutylene terephthalate blocks (van Dijkhuizen-Radersma et al., 2004). Results of a dose finding study in humans with PolyActiveTM microspheres loaded with interferon-a are shown in Figure 21. 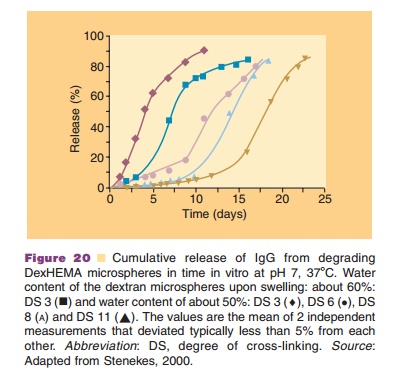 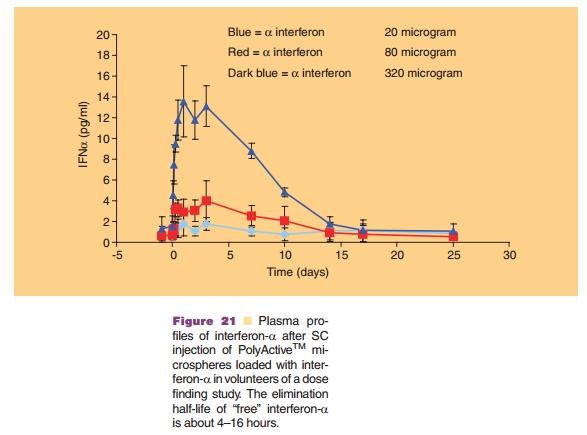 If input rate control is desired to stabilize a certain body function, then this function should be monitored. Via an algorithm and connected pump settings, this data should be converted into a drug-input rate. These systems are called closed-loop systems as compared to the open-loop systems discussed above. If there is a known relationship between plasma level and phar-macological effect, these systems contain (Fig. 22): 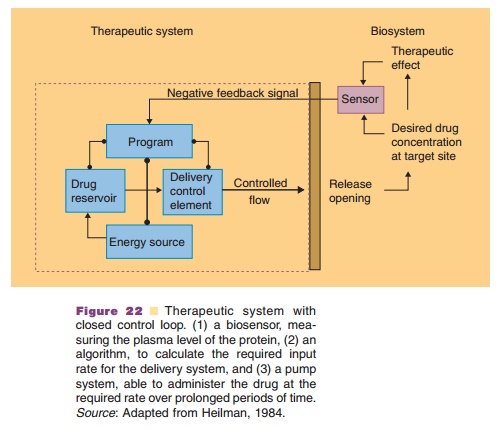 1. a biosensor, measuring the plasma level of the protein;

2. an algorithm, to calculate the required input rate for the delivery system;

3. a pump system, able to administer the drug at the required rate over prolonged periods of time.

The concept of a closed-loop delivery of proteins still has to overcome many conceptual and practical problems. A simple relationship between plasma level and therapeutic effect does not always exist. There are many exceptions known to this rule, for instance, “hit and run” drugs can have long lasting pharmacological effects after only a short exposure time. Also, drug effect–blood level relation-ships may be time dependent, as in the case of down regulation of relevant receptors on prolonged stimu-lation. Finally, if circadian rhythms exist, these will be responsible for variable PK/PD relationships as well.

If the above expressed PK/PD concerns do not apply, as with insulin, technical problems form the

second hurdle in the development of closed-loop systems. It has not been possible yet to design biosensors that work reliably in vivo over prolonged periods of time. Biosensor stability, robustness and absence of histological reactions still pose problems.

Apart from the design of biosensor-pump combina-tions, two other developments should be mentioned when discussing closed-loop approaches: self-regulat-ing systems and encapsulated secretory cells. At the present time, both concepts are still under develop-ment (Heller, 1993).

In self-regulating systems, drug release is con-trolled by stimuli in the body. By far most of the research is focused on insulin release as a function of local glucose concentrations in order to stabilize blood glucose levels in diabetics. Two approaches for controlled drug release are being followed: (i) competitive desorption and (ii) enzyme-substrate reactions. The competitive desorption approach is schematically depicted in Figure 23. 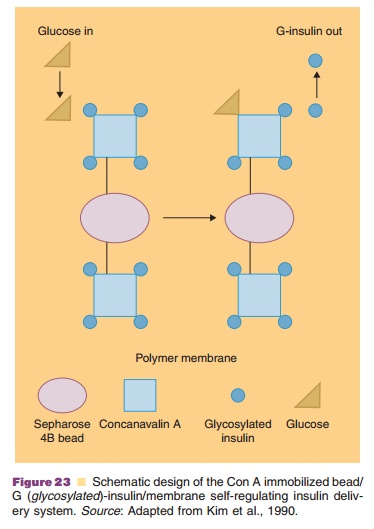 It is based on the competition between glycosy-lated-insulin and glucose for concanavalin (Con A) binding sites. Con A is a plant lectin with a high affinity for certain sugars. Con A attached to sepharose beads and loaded with glycosylated-insulin (a bioactive form of insulin) is implanted in a pouch with a semiperme-able membrane: permeable for insulin and glucose, but impermeable for the sepharose beads carrying the toxic Con A. An example of the performance of a Con A–glycosylated-insulin complex in pancreatectomized dogs is given in Figure 24. 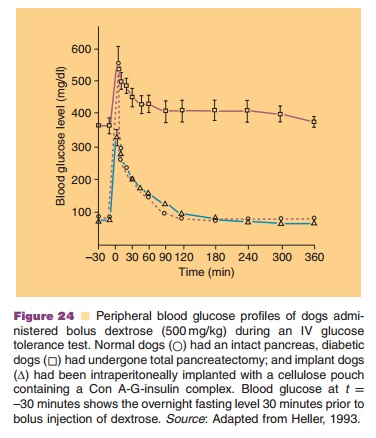 Enzyme-substrate reactions to regulate insulin release from an implanted reservoir are all based on pH drops occurring when glucose is converted to gluconic acid in the presence of the enzyme glucoseoxidase. This pH drop then induces changes in the structure of acid-sensitive delivery devices such as acid sensitive polymers, which start releasing in-sulin, lowering the glucose concentration, and consequently increasing the local pH and “closing the reservoir.”

The idea to use implanted, secretory cells to admin-ister therapeutic proteins was launched long ago. A major goal has been the implantation of Langerhans cells in diabetics to restore their insulin production through biofeedback. These implanted secretory cells should be protected from the body environment, since rejection processes would immediately start, if im-perfectly matched cell material is used. Besides, it is desirable to keep the cells from migrating in all different directions. When genetically modified cells are used, safety issues would be even stricter. Therefore, (micro)encapsulation of the secretory cells has been proposed (Fig. 25). 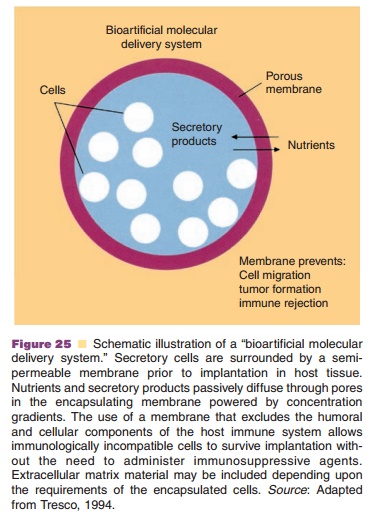 Thin (wall thickness in micrometer range), robust, biocompatible and permselective polymeric membranes have been designed for these (micro) capsules (Tresco, 1994; Uludag et al., 1993). The membrane should ensure transport of nutrients (in general low MW) from the outside medium to the encapsulated cells to keep them in a physiological, “healthy” state and to prohibit induction of undesir-able immunological responses (rejection processes). Antibodies (MW > 150 kDa) and cells belonging to the immune system (e.g., lymphocytes) should not be able to reach the encapsulated cells. The polymer mem-brane should have a cut off between 50 and 150 kDa, the exact number still being a matter of debate. In the case of insulin the membrane is permeable for thisrelatively small sized hormone (5.4 kDa) and for glucose (“indicator” molecule), which is essential for proper biofeedback processes. Successful studies in diabetic animals were performed. Promising clinical data has been reported with human secretory islet cells encapsulated in alginate-based microspheres (Shoon-Shiong et al., 1994).