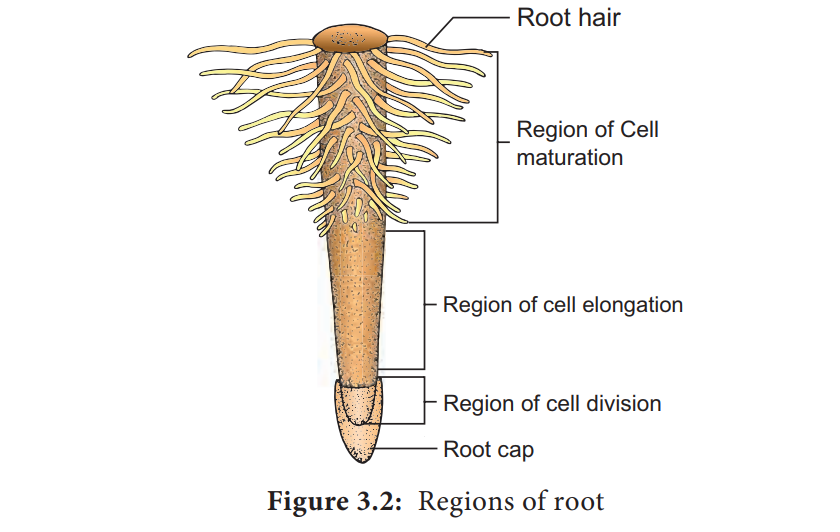 The root is non-green, cylindrical descending axis of the plant that usually grows into the soil (positively geotropic).
Root System

The root is non-green, cylindrical descending axis of the plant that usually grows into the soil (positively geotropic). It develops from the radicle which is the first structure that comes out when a seed is placed in the soil. Root is responsible for absorption of water and nutrients and anchoring the plant.

•            Does not possess nodes, internodes and buds (Exception in sweet potato and members of Rutaceae, roots bear buds which help in vegetative propagation)

•            It is positively geotropic and negatively phototropic in nature.

Root tip is covered by a dome shaped parenchymatous cells called root cap. It protects the meristematic cells in the apex. In Pandanus multiple root cap is present. In Pistia instead of root cap root pocket is present. A few millimeters above the root cap the following three distinct zones have been classified based on their meristematic activity. 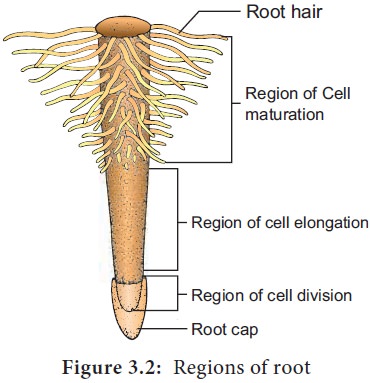 Primary root is the direct prolongation of the radicle. When the primary root persists and continues to grow as in dicotyledons, it forms the main root of the plant and is called the tap root. Tap root produces lateral roots that further branches into finer roots. Lateral roots along with its branches together called as secondary roots. 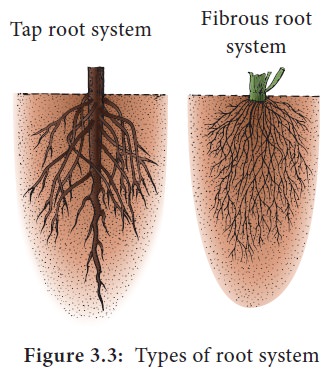 Root developing from any part of the plant other than radicle is called adventitious root.

It may develop from the base of the stem or nodes or internodes. Example: Monstera deliciosa, Ficus benghalensis, Piper nigrum. In most of the monocots the primary root of the seedling is short lived and lateral roots arise from various regions of the plant body. These are bunch of thread-like roots equal in size which are collectively called fibrous root system generally found in grasses. Example: Oryza sativa, Eleusine coracana, Pennisetum americanum.

These are cone like, broad at the base and gradually tapering towards the apex. Example: Daucus carota.

These roots are swollen in the middle and tapering towards both ends. Example: Raphanus sativus

It is very broad and suddenly tapers like a tail at the apex. Example: Beta vulgaris 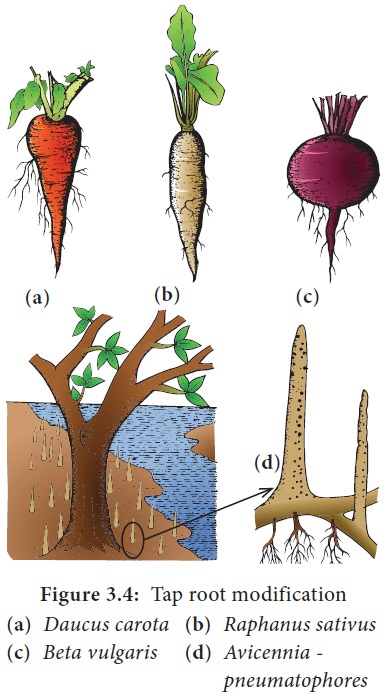 Some mangrove plants like Avicennia, Rhizophora, Bruguiera develop special kinds of roots (Negatively geotropic) for respiration because the soil becomes saturated with water and aeration is very poor. They have a large number of breathing pores or pneumatophores for exchange of gases.

These roots are swollen without any definite shape. Tuberous roots are produced singly and not in clusters. Example: Ipomoea batatas.

These roots are in cluster from the base of the stem Example: Dahlia, Asparagus, Ruellia.

These roots have a series of ring- like swelling on their surface at regular intervals. Example: Psychotria (Ipecac)

These roots grow vertically downward from the lateral branches into the soil.

These are thick roots growing obliquely from the basal nodes of the main stem. These provide mechanical support.

These roots are produced from the nodes of the stem which attach themselves to the support and help in climbing. To ensure a foothold on the support they secrete a sticky juice which dries up in air, attaching the roots to the support. Example: Epipremnum pinnatum, Piper betel, Ficus pumila.

In certain trees broad plank like outgrowths develop towards the base all around the trunk. They grow obliquely downwards and give support to huge trunks of trees. This is an adaptation for tall rain forest trees. Example: Bombax ceiba (Red silk cotton tree), Ceiba pentandra (white silk cotton tree), Terminalia arjuna, Delonix regia, Pterygota alata.

Some epiphytic orchids develop a special kind of aerial roots which hang freely in the air. These roots develop a spongy tissue called velamen which helps in absorption of moisture from the surrounding air. Example: Vanda, Dendrobium, Aerides.

Roots are produced from the veins or lamina of the leaf for the formation of new plant. Example: Bryophyllum, Begonia, Zamioculcas.

These roots are found in parasitic plants. Parasites develop adventitious roots from stem which penetrate into the tissue of the host plant and suck nutrients.