Parts of the leaf 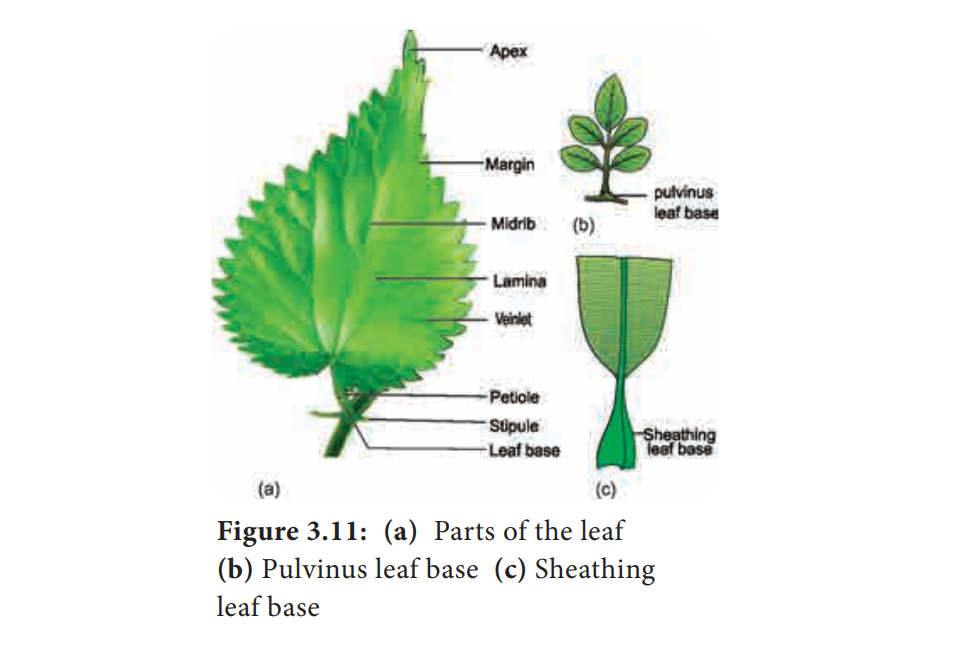 Parts of the leaf

Three main parts of a typical leaf are:

The part of the leaf attached to the node of the stem is called leaf base. Usually it protects growing buds at its axil.

Sheathing leafbase: In many monocot families such as Arecaceae, Musaceae, Zingiberaceae and Poaceae the leafbase extends into a sheath and clasps part or whole of the internode. Such leafbase also leave permanent scars on the stem when they fall.

It is the bridge between lamina and stem. Petiole or leaf stalk is a cylindrical or sub cylindrical or flattened structure of a leaf which joins the lamina with the stem. A leaf with petiole is said to be petiolate. Example: Ficus, Hibiscus, Mangifera, Psidium. Leaves that do not possess petiole is said to be sessile. Example: Calotropis, Gloriosa.

The expanded flat green portion of the leaf is the blade or lamina. It is the seat of photosynthesis, gaseous exchange, transpiration and most of the metabolic reactions of the plant. The lamina is traversed by the midrib from which arise numerous lateral veins and thin veinlets. The lamina shows great variations in its shape, margin, surface, texture, colour, venation and incision.

In most of the dicotyledonous plants, the leaf base bears one or two lateral appendages called the stipules. Leaves with stipules are called stipulate. The leaves without stipules are called exstipulate or estipulate. The stipules are commonly found in dicotyledons. In some grasses (Monocots) an additional out growth is present between leaf base and lamina. It is called Ligule. Sometimes, small stipule like outgrowths are found at the base of leaflets of a compound leaf. They are called stipels. The main function of the stipule is to protect the leaf in the bud condition.