Relation between enthalpy `H' and internal energy `U'

H is defined as sum of the internal energy `U' of a system and the product of Pressure and Volume of the system.

Enthalpy, H depends on three state functions U, P, V and hence it is also a state function. H is independent of the path by which it is reached. Enthalpy is also known by the term `heat content'.

Relation between enthalpy `H' and internal energy `U'

`qp' is the heat absorbed by the system at constant pressure and is considered as the heat content of the system.

Considering a system of gases which are chemically reacting to produce product gases with Vr and Vp as the total volumes of the reactant and product gases respectively, and nr and np as the number of moles of gaseous reactants and products, then using ideal gas law we can write that, at constant temperature and constant pressure,

Then considering reactants as initial state and products as final state of the system,

∆ng refers to the to the difference in the number of moles of product and reactant gases. But, we already know that, ∆H = ∆U + P ∆V 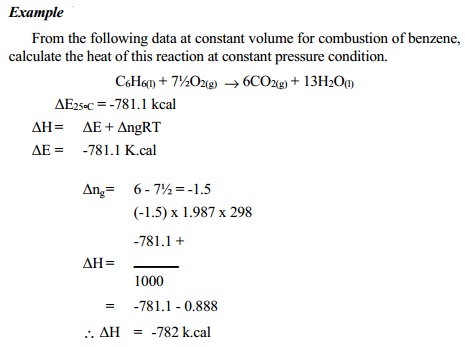 The standard enthalpy of a reaction is the enthalpy change for a reaction when all the participating substances (elements and compounds) are present in their standard states.