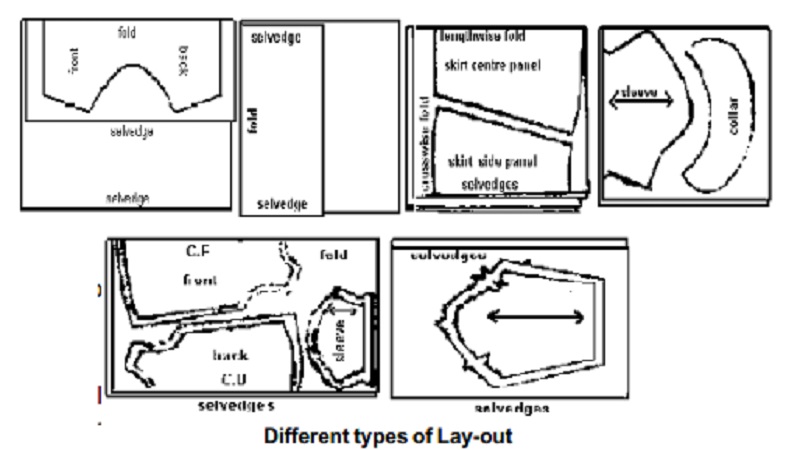 Laying Pattern Pieces over the fabric in an economical way is called as pattern layout. This prevents wastage of fabric.

Laying Pattern Pieces over the fabric in an economical way is called as pattern layout. This prevents wastage of fabric.

Some of the principles to be followed while laying patterns:

Use a large table or any hard flat surface for accommodating the work.

Decide on the best way to fold your cloth this will depend on the width of the cloth, width of your pattern pieces, the type of cloth and design of the garment (whether left and right haves are identical. Whether many pieces have to be cut on fold the garment

(whether left and right halves are identical, whether many pieces have to be cut on fold etc.) The common methods of folding the cloth for laying out pattern pieces are the following.

Here the fabric is folded down the middle parallel to the selvedge so that the selvedges come together. This is the most frequently used fold. The layout for a simple frock on this type of fold is illustrated in the figure.

b. Off centre lengthwise fold:

This is used when narrow pieces have to be cut on fold. To ensure that the fold is parallel to the selvedge, mark points measuring the required distance (width of the half pattern including seam allowance) from the selvedges at regular intervals and fold along the markings. The layout for a child's panty on this type of layout is illustrated in the figure.

This is suitable for materials that are too narrow to accommodate the width of pattern pieces when folded lengthwise.

When only a part of the material is required to cut pattern pieces that are too wide for lengthwise fold layout, this type of fold is used.

In this type of layout, the fabric is not folded at all. This is used especially for designs which regain right and left halves to be cut separately.

Make a trial layout by keeping weights or two pins per pattern, to make sure that cloth will be sufficient. Rules 6 to 9 must be borne in mind while making the trial layout.

Fold lines on the patterns must be kept on folded edges of fabric.

The patterns must be placed on the fabric in the most economical way.

Pin patterns to the fabric firmly, after placement of the pattern has been decided, pin the corners and the long outside edges of the patterns, placing pins close to and approximately perpendicular to the cutting line. Use just enough pins to keep the pattern in position. Too many pins will distort the edges. You should start cutting the fabric only after pinning all the pattern pieces.

Take care to use special layouts for asymmetric designs and for fabrics with bold designs, striped and checked designs, designs going in one direction and fabrics with nap and pile.