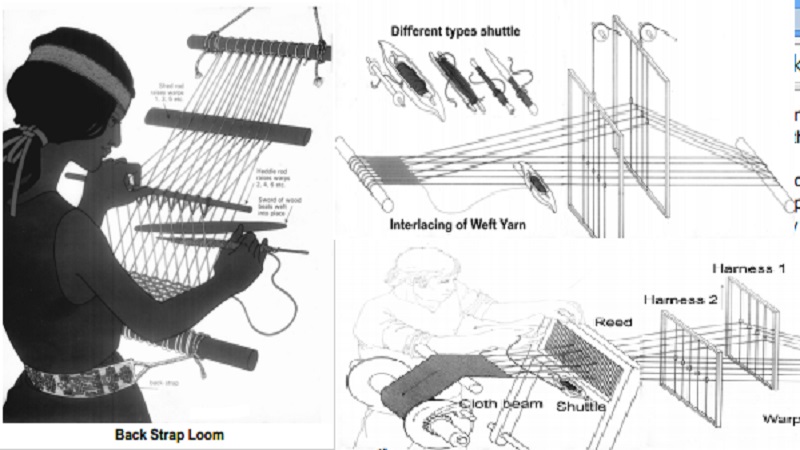 Before weaving yarns intended for warp must pass through such operations as spooling, wraping and slashing to prepare them to withstand the strain of weaving process.

The machine used for weaving fabrics is a loom. Before weaving yarns intended for warp must pass through such operations as spooling, wraping and slashing to prepare them to withstand the strain of weaving process. These processes do not improve quality of yarns.

Yarn is wound on large spools, or cones which are placed on a rack called a creel from this yarns are wound on warp beam, which is similar to huge spool.

These yarns are unwound to be put through a slashing or sizing bath. The slasher machine covers every yarn with a coating to prevent breaking during weaving process.

The sized yarns are then wound on a final warp beam and are ready for the loom.The warp beam prepared now is then mounted on looms.

The warp beam holds the length-wise yarns and is located at the back of the loom. This beam is controlled so that it releases yarn to the loom as it is needed.The Heddles are wires or metal strips with an eye located in the center through which the warp ends are threaded. The harness is the frame that holds the Heddles in position. Each loom has atleast two harnessess. A majority of looms for regular fabrics have four to twelve harnessess and some looms may have as many as thirty-two. Harnessess can be raised or lowered to produce the shed through which the filling yarn is passed and thus controls the pattern of weave.The shuttle move back and forth in the shed created, passing the filling yarns between the warp yarns. The reed is a comb like device that helps to pack the filling yarns into position in the woven fabric.

The opening in the reed through which the warp yarns are threaded are called Dents. This maintain the warp yarns in a systematic relation and prevents yarns from tangling during weaving process.The cloth beam is located at the front of the loom and holds the completed fabric. So we can say a basic loom consists of: 1. Warp beam 2. Heddles and harness 3. Shuttle 4. Reed 5. Cloth beam

Now-a-days highly sophisticated looms are available which may have devices other than these but all the looms no matter how specialized they are, have some basic operations which are fundamental and are performed in sequence and are constantly repeated.

It is raising and lowering of warp yarns by the harnessess to make an opening for the weft yarns to pass through.

It is the actual process of placing the weft yarns in the shed. This is done using a device known as 'shuttle'. It has a metal strip in which bobbin or pin is inserted.

Sometimes called beating in or beating up, consists of evenly packing the filling yarns into position in the fabric. It gives a compact construction to the fabric.

d. Taking up and letting off:

It involves taking up the newly manufactured fabric onto the cloth beam and letting off or releasing yarn from the warp beam. The operation maintains uniform distance and tension from warp beam to harness to completed cloth.

Weaving is a major method of fabric construction. The technique probably became known before spinning. Spinning developed when people discovered that the raw material could be improved before they were woven. In the course of time, rude looms were made, which were simple and hand-operated, fabrics produced on such looms are also known as hand loom fabrics where every thing is done by hands. The modern power loom used in the textile industry today essentially performs the same operation as the simple hand operated loom. The fabric produced on power looms is made comparitively faster and has few defects in comparison to hand looms.

Based on the picking operations looms are divided into various categories. The two major ones are based upon the method of filling insertion. Looms that uses shuttle are called conventional shuttle or fly shuttle looms. Shuttle looms have very compact selvedge. It is the oldest and versatile method of weaving so most different kinds of fabrics can be obtained. Very large wooden shuttle is used and every time it passes through warp yarns it causes abrasion and the productivity may go down because of the low strength of yarns. The broken yarns show fabric defects. Shuttle looms are very noisy and PPM (Picks Per Minute-How many wefts laid in one minute) is 110 to 225.

On the other hand looms that uses other devices to bring the filling yarn through the shed are called shuttleless looms. The source of the yarn for shuttleless looms are cones placed at the sides of the loom. Shuttle-less looms gives very high productivity at the same time they are less noisy when compared to shuttle-looms. They also have high productivity and fewer fabric faults.

There are different types of looms other than conventional looms such as:

A selvedge is defined as length-wise edge of the fabric. Found on both ends of the fabric usually � to � inches broad.

Main purpose of selvedge is to hold warps and wefts together. It prevents fabric from ravelling. In machine loom a separate operation is required to finish the edges. Selvedge is usually much more compact than rest of the fabric. There are more warp yarns in the area of selvedge. 1. Mostly ply is used for selvedge. 2. Twist is more in selvedge. 3.Suppose body fabric is in a weak weave then the selvedge is stronger than the rest of the fabric. 4.Selvedge will depend on end use of fabric secondly on economy of production.

Durability of fabric depends on the following factors:

Kind and quality (staple or filament)

Strength and twist of yarn

Compactness of construction or thread count.

The manner in which groups of warp yarns are raised by the harness to permit the insertion of the filling yarn determines the pattern of the weave, and in large measure the kind of fabric produced. Weave patterns can create varying degrees of durability in fabrics, adding to their usefulness and also to their appearnance.

There are three basic weaves. They are plain weave, twill weave and satin weave. All other weaves are a variation or a combination of these weaves. Basket weave and Rib weave are two variations of plain weave. In the same manner twill weave can also have number of variations, e.g., warp faced twill, weft faced twill, even twill, uneven twill, pointed twill, herring bone twill, gabardine, corkscrew and so on.

Graph paper (or pointed paper) is used to show the weaves or the order in which the Representation of Plain Weave yarns interlace in a fabric. It is used by textile designers to portray their designs or to analyse fabric weaves. Each vertical row of squares represents a warp yarn and each horizontal row of squares represents a filling yarn. A warp yarn crossing over a fillings usually shown by marking in the square called a 'raiser'. A blank square over the warp called 'sinker'.

The weave diagram does not show the number of yarns per inch between warp and filling. The yarn size and type are also not indicated. The completed design shows the interlacing from the face side of the cloth. Most weaves are analysed from the face side.