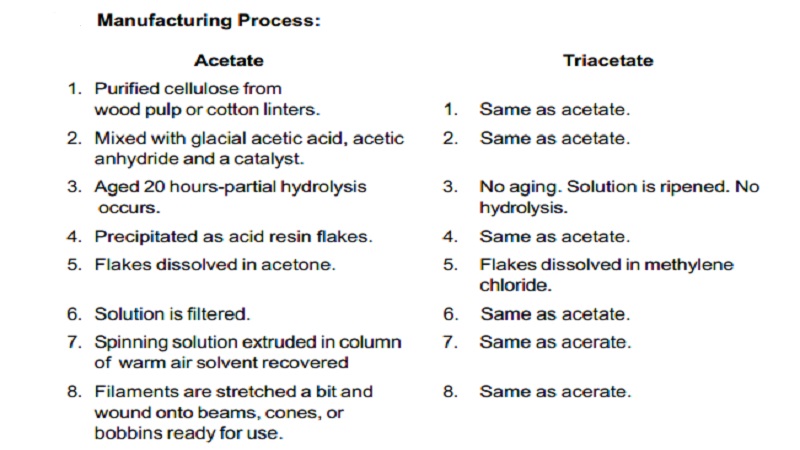 Acetate, which is properly called cellulose acetate (chemically di-acetate or secondary acetate) was first made by Paul Schutzenberger in 1869.

Acetate, which is properly called cellulose acetate (chemically di-acetate or secondary acetate) was first made by Paul Schutzenberger in 1869. The first use of this substance was as a coating on cotton fabric or as a film similar to cellophane or plastic wrap. As a coating the substance was applied to fabric used in early aeroplanes. Triacetate fibers were developed along with regular acetate. However, manufacture of triacetate into fiber form was delayed until safe solvents became available in sufficient quantity to make production economically profitable. Both Acetate and triacetate continue to be respected fibers for selected types of fabrics however their use has continued to decline over the years.

Mixed with glacial acetic acid, acetic anhydride and a catalyst.

Filaments are stretched a bit and wound onto beams, cones, or bobbins ready for use.

The manufacturing processes are listed in the accompanying chart, which indicates the two major differences in production. Triacetate is produced in both processes, but to make acetate, the solution is hydrolyzed (treated with water and aged) which causes some hydroxyl groups to reform. Triacetate is dissolved in a different solvent and acetate in a different solution. 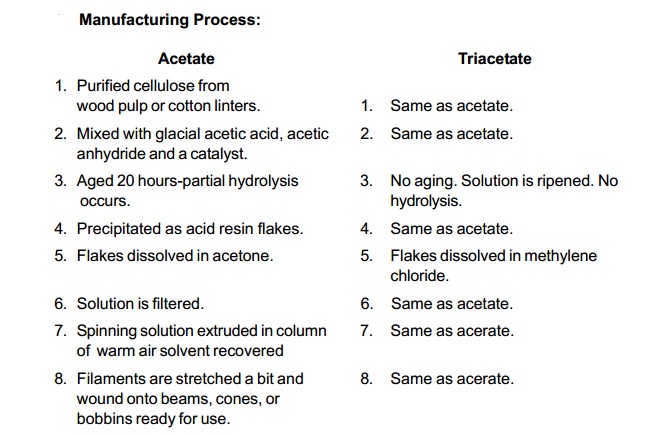 Properties of Acetate and Triacetate:

Shape : Shape can be controlled by the manufacturer-therefore uniform in observed appearance.

Luster : Vary from dull to bright.

Dimensional stability :  Good (for both)

Resistance to Acids : Both fibers have fair resistance to dilute acids and poor to concentrated acids.

Alkalis : Good to dilute and both are destroyed in concentrated alkalis.