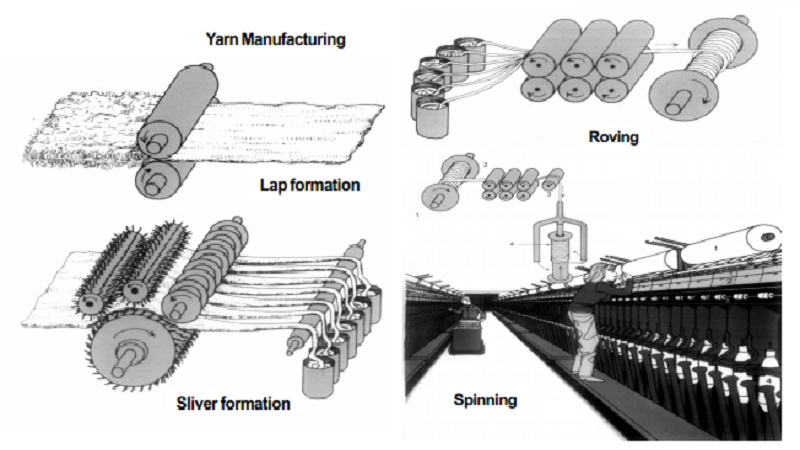 The twisting process by which fibers are formed into a yarn is referred to as spinning.

The twisting process by which fibers are formed into a yarn is referred to as spinning. Spinning includes all the processes required to prepare and clean the fibers from the opening of the bale to the twisting of the yarn in its preparation for the textile loom.

In order to produce a uniform product, the fibers from numerous bales be blended, or thoroughly mixed together, and from this composite, the final yarns will be produced . The masses of fibres from these numerous bales will be fed into a machine called a blending feeder. As these masses of fiber are loosened and thoroughly mixed, some remaining heavy impurities such as dirt, remnants of seeds, leaves or stems, are removed by a line of machine known respectively as pickers, breakers, intermediates and finishers each in succession being a somewhat more refined cleaner of the raw fibres. From these machines, the fabric emerges as a lap, a loose, formless roll.

The lap is unrolled and drawn onto a revolving cylinder covered with fine hooks or wide bristles. These wide bristles pull the fibers in one direction, separate those which are individually tangled together and form them into a thin film. This process is known as carding. The thin film is drawn into a funnel shaped opening which molds it into a round rope like strand approximately an inch in diameter; this is called the sliver.

The comber is a refining device by which the paralleling and straightening of the individual fibers is carried to a more exact degree. The longer fibers are again formed into a sliver, known as the comb sliver.

The combined or condensed combed sliver is taken to the slubber of a series of machines called roving frames.

Spinning is a continuation of the roving and on the spinning frame many spools containing the roving pass through the ring spinning mechanism which further draws and twists to a yarn of the required size and twist and winds it on bobbins preparatory to the weaving operation. 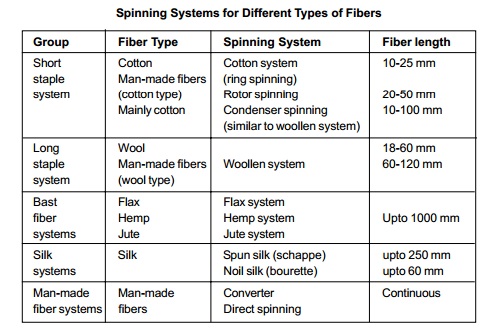