Three platinum analogs are currently used in clinical practice: cis-platin, carboplatin, and oxaliplatin. Cisplatin (cis-diamminedichlo-roplatinum [II]) is an inorganic metal complex that was initially discovered through a serendipitous observation that neutral plati-num complexes inhibited division and filamentous growth of Escherichia coli. Several platinum analogs were subsequently synthe-sized. Although the precise mechanism of action of the platinum analogs is unclear, they are thought to exert their cytotoxic effects in the same manner as alkylating agents. As such, they kill tumor cells in all stages of the cell cycle and bind DNA through the formation of intrastrand and interstrand cross-links, thereby leading to inhibi-tion of DNA synthesis and function. The primary binding site is the N7 position of guanine, but covalent interaction with the N3 posi-tion of adenine and O6 position of cytosine can also occur. In addi-tion to targeting DNA, the platinum analogs have been shown to bind to both cytoplasmic and nuclear proteins, which may also contribute to their cytotoxic and antitumor effects. The platinum complexes appear to synergize with certain other anticancer drugs, including alkylating agents, fluoropyrimidines, and taxanes.

Cisplatin has major antitumor activity in a broad range of solid tumors, including non-small cell and small cell lung cancer, esophageal and gastric cancer, cholangiocarcinoma, head and neck cancer, and genitourinary cancers, particularly testicular, ovarian, and bladder cancer. When used in combination regimens, cispla-tin-based therapy has led to the cure of nonseminomatous testicu-lar cancer. Cisplatin and the other platinum analogs are extensively cleared by the kidneys and excreted in the urine. As a result, dose modification is required in patients with renal dysfunction.

Carboplatin is a second-generation platinum analog whose mechanisms of cytotoxic action, mechanisms of resistance, and clinical pharmacology are identical to those described for cisplatin.

As with cisplatin, carboplatin has broad-spectrum activity against a wide range of solid tumors. However, in contrast to cisplatin, it exhibits significantly less renal toxicity and gastrointestinal toxicity. Its main dose-limiting toxicity is myelosuppression. It has therefore been widely used in transplant regimens to treat refractory hema-tologic malignancies. Moreover, since vigorous intravenous hydra-tion is not required for carboplatin therapy, carboplatin is viewed as an easier agent to administer to patients, and as such, it has replaced cisplatin in various combination chemotherapy regimens.

Oxaliplatin is a third-generation diaminocyclohexane plati-num analog. Its mechanism of action and clinical pharmacology are identical to those of cisplatin and carboplatin. However, tumors that are resistant to cisplatin or carboplatin on the basis of mismatch repair defects are not cross-resistant to oxaliplatin, and this finding may explain the activity of this platinum compound in colorectal cancer. Oxaliplatin was initially approved for use as second-line therapy in combination with the fluoropyrimidine 5-fluorouracil (5-FU) and leucovorin, termed the FOLFOX regi-men, for metastatic colorectal cancer. The FOLFOX regimen was subsequently (2005) approved for the first-line treatment of meta-static colorectal cancer. At this time, oxaliplatin-based chemo-therapy has also been approved in the adjuvant therapy of high-risk stage II and stage III colon cancer. Clinical activity has been observed in other gastrointestinal cancers, such as pancreatic, gastroesophageal, and hepatocellular cancer. In the side effect profile, neurotoxicity is the main dose-limiting toxicity, and is manifested by a peripheral sensory neuropathy. There are two forms of neurotoxicity, an acute form that is often triggered and worsened by exposure to cold, and a chronic form that is dose-dependent. Although this chronic form is dependent on the cumulative dose of drug administered, it tends to be reversible, in contrast to cisplatin-induced neurotoxicity.

The major toxicities of the individual platinum analogs are outlined in Table 54â€“2. 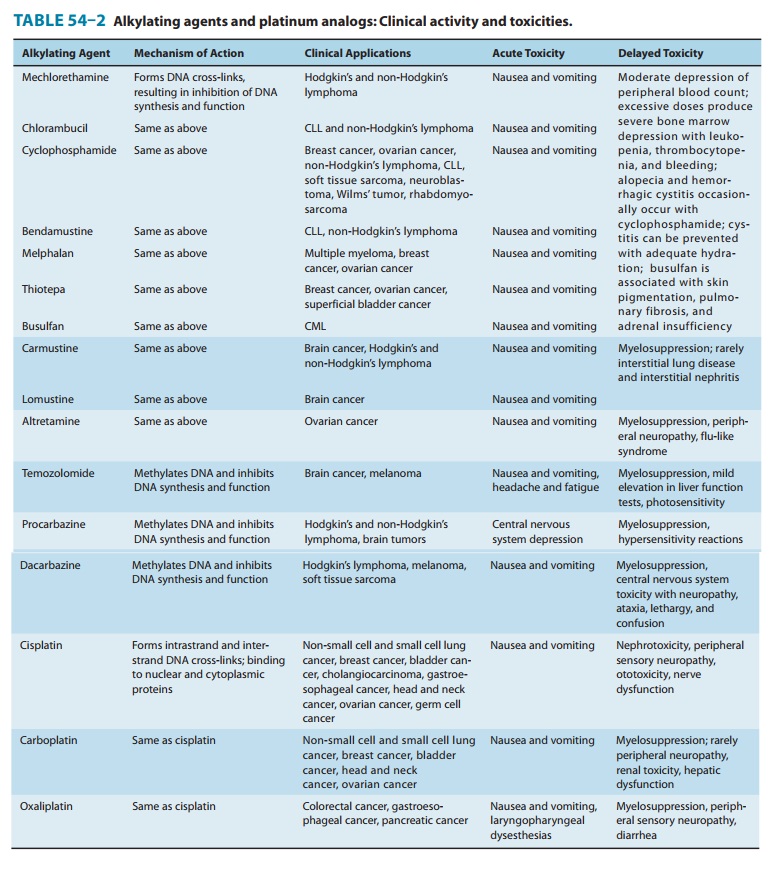