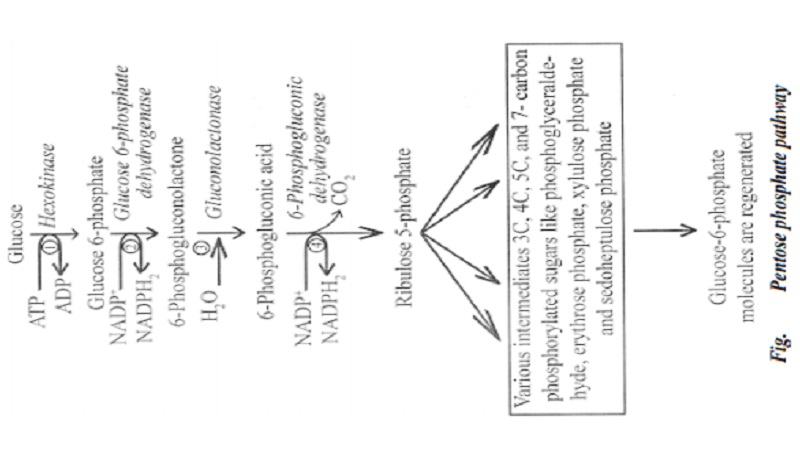 Generally, majority of living organisms obtain energy for various biochemical activities from glucose. In aerobic organisms, it is degraded in three major phases namely, glycolysis, Krebs cycle and electron transport system. In anaerobes, glucose is partially degraded by glycolysis and fermentation. In 1938, Dickens discovered an alternate pathway for the utilization of glucose by the living cells. This pathway is called pentose phosphate pathway or hexose monophosphate pathway or direct oxidation pathway. This pathway consists of major phases - oxidative and nonoxidative phases. Pentose phosphate pathway takes place in the cytoplasm only.

In this phase, glucose is oxidized and decarboxylated with the formation of pentose through phosphogluconic acid as shown in the flow chart. The essential feature of this phase is the production of NADPH2.

1.       Glucose is phosphorylated to glucose-6-phosphate by hexokinase. 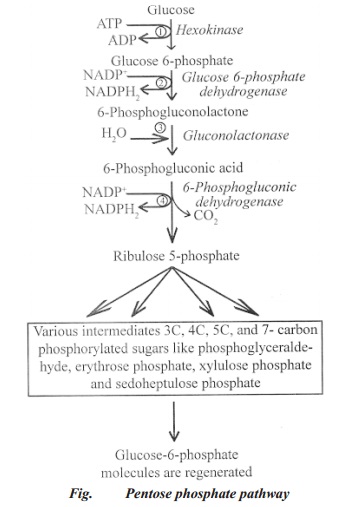 2.     It generates NADPH2 molecules which are used as reductants in biosynthetic processes. Production of NADPH2 is not linked to ATP generation in pentose phosphate pathway.

3.     It provides ribose sugar for the synthesis of nucleic acids.

4.     It provides erythrose phosphate required for the synthesis of aromatic compounds.

5.     It plays an important role in fixation of CO2 in photosynthesis through Ru5P.