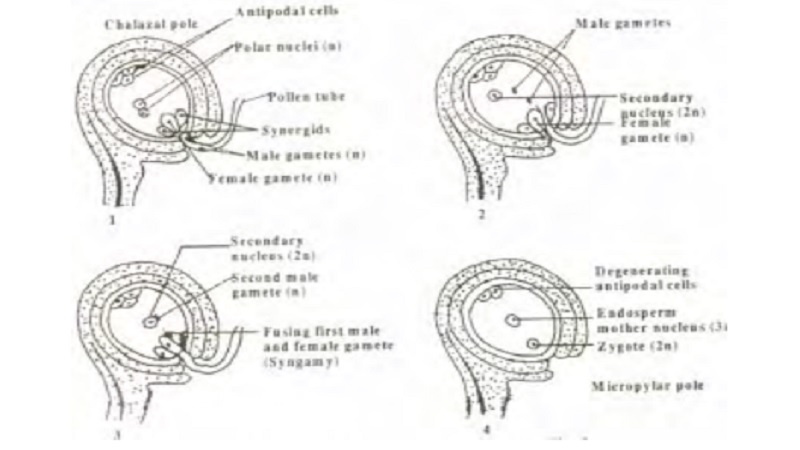 In seed plants, the male gametes arebrought to the eff containing female gametophyte by a pollen tube, the phenomenon is calledsiphonogamy.

Out of the two male gametes, one fuses with the egg nucleus and forms a diploid zygote. This process of gametic fusion is calledsyngamy or true fertilization. It is also known as generative fertilization.

1.          In angiosperms the growth of the embryo sac (female gametophyte) stops at 8 nucleate or 7 celled stage. The fusion of second male gamete with the polar nuclei or secondary nucleus, provides stimulus to one of its cells to resume growth and form the nutritive tissue or endosperm.

2.          Double fertilizationensures that the nutritive tissue or endosperm is formed only when the formation of embryo has been confirmed by fertilization of egg. If fertilization fails due to some reason, no endosperm will be formed. Thus no energy of the plant will be wasted on this account in angiosperms.

After fertilization the sepals,petals, stamens, styles and stigma usually wither and fall off. The calyx may persis(e.g. tomato, brinjal) and even show growth (eg. Physalis). The zygote undergoes a number of mitotic divisions and forms a multicellularembryo.The primary endosperm nucleus also undergo mitotic division to form a food laden tissue called endosperm. The ovules mature into seeds and the ovary containing the ovules enlarges and forms the fruit.