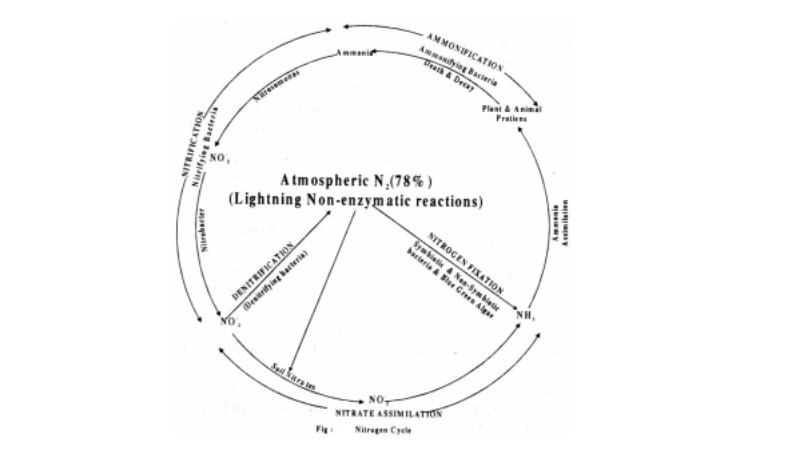 The process by which these forms get inter converted to maintain a constant amount of nitrogen in atmosphere, by physical and biological processes is called nitrogen cycle. the cycle includes 5 stages. i. Ammonification ii. Nitrification iii. Nitrate assimilation iv. Denitrification and v. Nitrogen fixation

Nitrogen is an inert gas which constitutes 78% of the atmosphere. It is an important mineral present in the bodies olf living organisms. It forms a component of proteins and aminoacids and is also present in nucleic acids, cytochromes, chlorophyll, vitamins, alkaloids and so on.

Nitrogen cannot be used directly and is converted to Nitrites, Nitrates and Ammonia by a process called Nitrogen Fixation. There are many free living organisms like bacteria and blue-green algae which are involved in nitrogen fixation. The ammonia and urea present in the soil are directly absorbed by plants.

The atmosphere is the source of elemental nitrogen which cannot be used directly by plants. The atmospheric nitrogen is converted to ammonia, nitrite, nitrate or organic nitrogen in the soil.

The death and decay of organic systems causes cycling of ammonia from amino acids, purnies and pyrimidines. Some of these forms may also be converted to Nitrogen gas and may be cycled back into the atmosphere.

The process by which these forms get inter converted to maintain a constant amount of nitrogen in atmosphere, by physical and biological processes is called nitrogen cycle. the cycle includes 5 stages.

This involves conversion of organic nitrogen to ammonium ions by microbes present in the soil. The sources of organic nitrogen in the soil are animal excreta and dead and decaying plant and animal remains which are acted upon by ammonifying saprotrophic bacteria such as Bacillus ramosus, Bacillus vulgaris, certain soil fungi and actinomycetes.

In warm moist soils having a temperature of 30- 35C and neutral pH, ammonia gets oxidized to nitrite (NO2-) and then nitrate (NO3-) by the process of nitrification. Nitrifying bacteria like Nitrosomonas convert ammonia to nitrite and another bacterium called Nitrobacter converts nitrite to nitrate.

The nitrate present in the soil is absorbed by plants through the root system in the form of NO3-ions.  But is

cannot be used by plants directly. So it is first reduced to nitrite by the enzyme nitrate reductase. Nitrite is then converted to Ammonia by the enzyme nitrite reductase series of steps requiring a total of eight electrons provided by reduced NAD and Ferredoxin (Fd). This reduction of Nitrate of Ammonia and its incorporation into cellular proteins by aerobic micro organisms and higher plants is called nitrate assimilation.

The process of conversion of nitrate and nitrite into ammonia, nitrogen gas and nitrous oxide (N2O) is called denitrification. This process ends in the release of gaseous nitrogen into the atmosphere and thus completes the nitrogen cycle. A number of bacteria such as Pseudomonas denitrificans, Bacillus subtilis and Thiobacillus dentrificans are involved in this process.

(i)  Non-Biological or Physical and

This involves fixation of nitrogen by chemical process in industry or naturally by electrical discharges such as lightning.

Nitrogen fixation that takes place by living things is called biological nitrogen fixation. These include some bacteria and blue-green algae, which have acquired the capaicity to fix atmospheric nitrogen during the evolutionary process by possessing a set of genes called 'nif ' (Nitrogen fixing) genes. They fix Nitrogen as given in the following reaction.

This is carried out by free living organisms in the soilsuch as Bacteria, blue green algae.

These organisms contain an enzyme system called Nitrogenase which is a Mo-Fe (Molybdenum-ferredoxin) protein. this progressively reduces the dinitrogen molecules to form ammonia, with the help of Ferredoxin and energy from ATP.

This is the commonest type of symbiotic nitrogen fixation which has been elaborately studied. A soil bacterium called Rhizobiuminfects roots of leguminous plants (belonging to Family Leguminosae) and forms the root nodules.

These are involved in nitrogen fixation. The bacteria living in the soil enter the root hair and penetrate the root cortex through an infection thread. When the bacteria enter the cortical cells of roots, the latter get stimulated to divide vigorously and form nodules on the root. The bacteria come to occupy the nodules, and at this stage lacl a rigid cell wall being called bacteroids. These make use of the food substances of the root cells and secrete a pinkish pigment called leghemoglobin which is an oxygen carrier like hemoglobin.

The Rhizobia in the form of bacteroides contain the enzyme nitrogenase which is responsible for fixation of Nitrogen thus benefitting the host plant. Leghemoglobin is supposed to protect the nitrogenase enzyme as it can function only under anaerobic conditions.