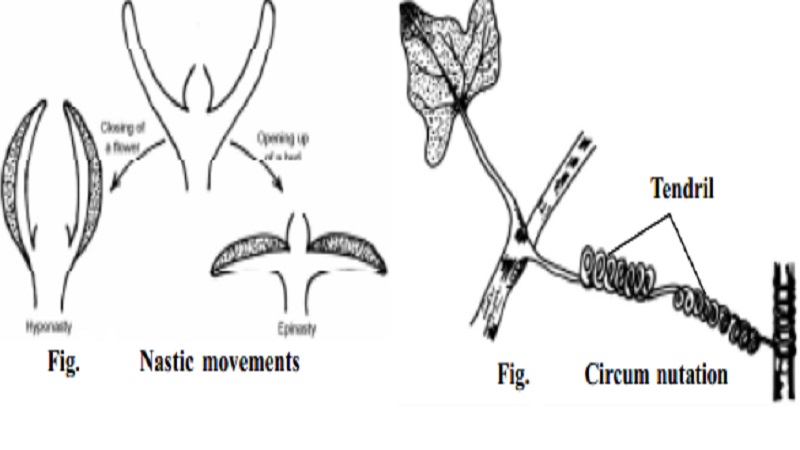 Plants are sedantary living things generally lacking the power of locomotion. But they possess the property of irritability i.e. the ability to respond to an external or internal stimulus. This causes some kind of movement in plants, which is generally a very slow movement and often escapes notice by the human eye.

Plants are sedantary living things generally lacking the power of locomotion. But they possess the property of irritability i.e. the ability to respond to an external or internal stimulus. This causes some kind of movement in plants, which is generally a very slow movement and often escapes notice by the human eye. But these movements can be actually demonstrated by a technique called time - lapse motion picture photography or by simply observing the plant at intervals of several hours and noting the changes in positions of the plant organs. The movements showed by plants can be classified broadly as (1) Hygroscopic-due to loss or gain of water and (2) Vital-due to irritability of the cytoplasm.

The vital movements may be further subdivided as follows.

I. Movements of Locomotion

(A)           Autonomic Movements : The spontaneous locomotory movements may be

The induced locomotory movements are also called tactic movements induced by external stimuli. Based on the nature of stimuli, these may be of three types :

Seen in zoospores and gametes which are provided with a light sensitive eyespot which is attracted by low light intensities.

Movement in response to heat stimulus is seen in certain motile algae like Chlamydomonas which moves from a colder to a warmer place.

In bryophytes and pteridophytes, the swimming antherozoids are attracted towards the archegonium by chemical stimuli such as organic substances like sugar, malic acid and so on.

These movements are generally exhibited by higher plants which remain anchored in one place. These can change or move the position of their organs by means of curvature. These types of movements may be further classified as (A) Movements of growth and (B) Movements of Variation.

(A) Movements of growth :

There is a change in the position of the organ either due to increase in number of cells or enlargement of cells or both. These movements can be Spontaneous or Autonomic and Induced or Paratonic.

These include the (1) Nastic and the (2) Nutational movements

These movements are generally observed in leaves, flowers, petals and bud scales. In these structures at

some stage of development, growth in one surface is more than the growth on the other surface. There may be two types of such movements :

Epinasty : If the upper or inner surface has more growth, the movement is called epinasty.  An  example  for epinasty is the opening up of a flower and the drooping of a bud.

Hyponasty : This indicates rapid growth on the abaxial or lower side of an organ. An example for this is the unfolding of a fern frond and closing of a flower.

This is an irregular movement shown by growing tips as they elongate. In tendrils and runners, there is a spiral type of growth of the stem apex called circum nutation. Ordinarily, nutational movements occur due to alternate change in the opposite sides of the apex. These movements are very slow and cannot be clearly seen.

These are the induced movements of growth caused by external stimuli such as gravity, light, water or contact. The movements show a directional relation to the stimulus. The stimuli are effective in causing growth movements only when they are unidirectional. Such movements are generally known as tropic movements and the phenomenon is referred to as tropism. Based on the nature of stimulus, tropisms may be of various types.