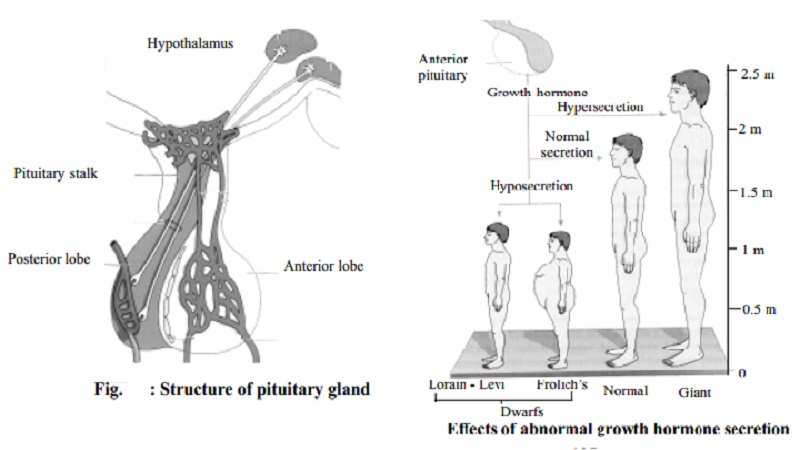 The pituitary is a small gland about the size of a cherry. It is situated at the base of the brain. It plays a peculiar role in the system of endocrine glands.

Endocrines : The glands of the body may be divided into those with an external secretion (exocrine glands) and those with an internal secretion (endocrine glands). Example of exocrine glands are the sweat, Lachrymal and mammary glands which pass their secretion along the ducts to the external surface of the body and the glands of the mouth, stomach, and intestine which pass their secretions along ducts into the alimentary tract. The endocrine or ductless gland on the other hand have no ducts or openings to the exterior.

The secretions are passed directly into the blood stream and transmitted to the tissues.

A hormone is a chemical substance produced by the endocrine glands and their overall function is to regulate the activities of various body organs and their functions. The first hormone was discovered by Bayliss in 1903.

The main endocrine glands in the body are :

The pituitary is a small gland about the size of a cherry. It is situated at the base of the brain. It plays a peculiar role in the system of endocrine glands. It is referred to as the 'master' gland of internal secretion because it controls the activities of other endocrine glands.

This part secretes a large number of hormones. Many of them stimulate other glands. Its main hormones are:

Excessive production of growth hormone in an adult leads to excessive development of certain regions such as fingers and toes, feet, hands, nose, lower jaw, tongue, thoracic and abdominal organs. This condition is known as acromegaly.

Thyrotropic Hormone (TSH): This hormone stimulates the activity of the thyroid gland. Administration of this hormone causes overgrowth of thyroid tissue.

Adreno Cortico Tropic Hormone: (ACTH): This hormone stimulates the cortex of the adrenal gland and increases the production of the hormones of adrenal cortex.

Follicle Stimulating Hormone (FSH): This hormone influences the growth, development and maturation of the vesicular follicles in the ovary. In males, the hormone stimulates the formation of sperm in the testes.

Lactogenic Hormone: It acts on the mammary gland and helps in the formation and flow of milk during lactation.

Luteinising Hormone: It is required for the growth of follicle in the ovary and stimulates ovulation. In the absence of the hormone,

no ovulation and production of the corpus luteum can occur. In males it stimulates the interstitial cells of testes to secrete testosterone.

Posterior Lobe of the Pituitary

This lobe is just behind the anterior lobe, it produces two hormones-Oxytocin and Vasopressin.

Vasopressin acts on the smooth muscle of the arterial system and increases the blood pressure. This hormone helps in the reabsorption of water from the distal convoluted tubule. Vasopressin deficiency is the cause of diabetes insipidus in which water is not reabsorbed. So great amounts of urine are excreted with no sugar in it. Such patients feel constantly thirsty.

The sex glands including the ovaries of the female and the testis of the male are important endocrine structures. The secretion of these glands play an important part in the development of the sexual characteristics. The male sex gland secretes hormone called testosterone and is responsible for secondary sex characteristics. The female sex gland secretes a hormone called estrogen and it stimulates the development and functioning of the female reproductive organs.

There is one other hormone produced by the female sex glands and it is called progesterone. This hormone assists in normal development of pregnancy.