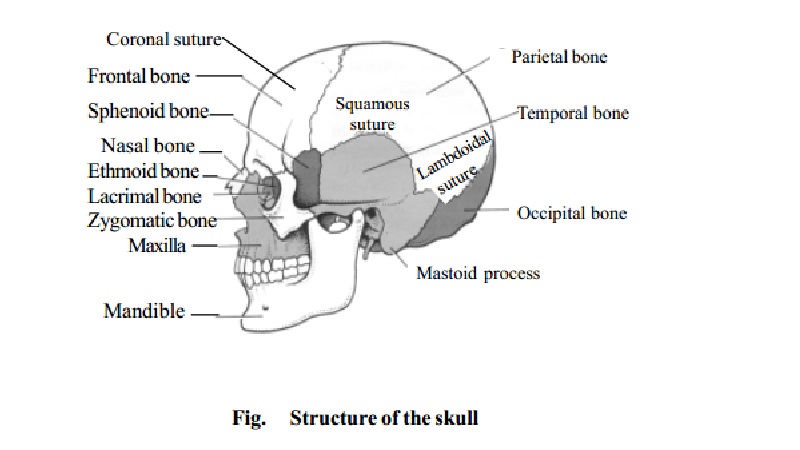 It provides support and protection for some of the soft organs. The adult human skeleton consists of approximately two hundred and six (206) bones grouped in two principal divisions, The axial skeleton The appendicular skeleton 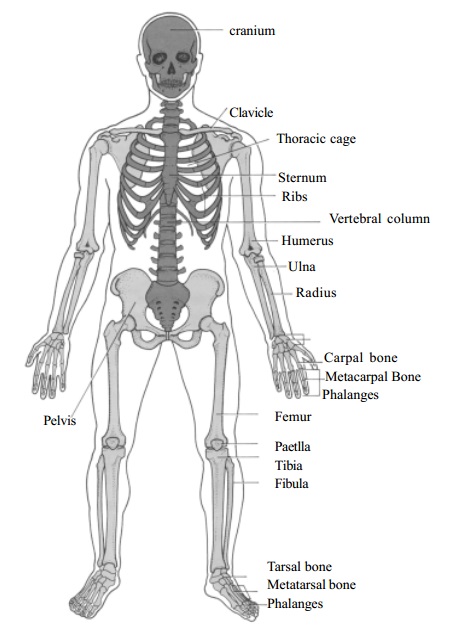 Skeletal System forms the framework of the body. It provides support and protection for some of the soft organs. The adult human skeleton consists of approximately two hundred and six (206) bones grouped in two principal divisions,

It is the bony framework of the head arranged in two parts - the cranium which consists of eight bones and the facial skeleton of fourteen bones.

The cavity of the cranium presents an upper surface known as the vault of the skull. This is smooth on the outer surface and marked by ridges and depressions to accommodate the brain and its blood vessels on the inner surface. The lower surface of the cavity is known as the base of the skull. It has an opening called the foramen magnum through which the spinal cord passes.

The bones which form the Cranium are flat bones which are immovably fixed to each other by sutures. The cranial bones enclose and protect the brain and organs of sight, hearing and balance. The 8 cranial bones are:

The occipital bone is at the back and lower part of the Cranial cavity. It is pierced by the foramen magnum through which the medulla oblongata passes to join the spinal cord.

The two parietal bones together form the roof and sides of the skull. The outer surface is smooth. The inner surface is marked by deep furrows which lodge the Cranial arteries.

The frontal bone forms the forehead and the upper part of the orbital cavities.

The two temporal bones form the lower part of the sides of the skull.

The ethmoid is a light spongy bone, cubical in shape, situated at the roof of the nose wedged in between the orbits. It is the principal supporting structure of the nasal cavity.

The sphenoid is situated at the anterior part of the base of the skull.

Sutures : A suture is an immovable joint found only between skull bones. Very little connective tissue is found between the bones of the suture.

The four prominent skull sutures are :

Coronal Suture between the frontal bone and the two parietal bones.

Lambdoidal suture between the parietal and the occipital bone.

Squamosal suture between the parietal and the temporal bones.

Bones of the face 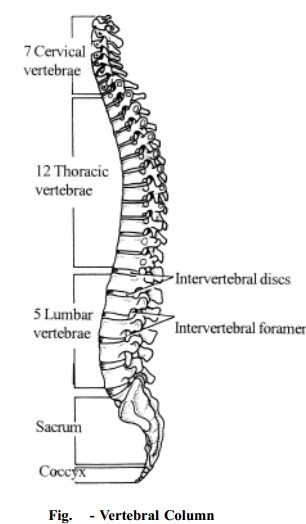 The Vertebral Column or the spinal column is a flexible structure formed by a number of bones called Vertebrae. They are the back bone which forms the main axis of the body to which all other skeletal parts are attached.

The vertebral column has three functions.

It supports the flexible body.

It provides attachments for muscles which permits flexible movements.

It provides protection for the spinal cord.

There are 33 vertebral bones. 24 of which are separate bones and the remaining vertebrae are fused to form two bones, the sacrum and the coccyx. The vertebrae are grouped and named according to the region they occupy. There are,

Seven Cervical Vertebrae that form the neck or Cervical region.

Twelve thoracic vertebrae that form the back of the thorax or chest.

Five lumbar vertebrae that form the lumbar region or lions.

Five Sacral vertebrae that are fused to form the sacrum.

Four Coccygeal vertebrae that are fused to form the Coccyx or tail.

The vertebrae in the three upper regions that remain separate are called movable vertebrae.

Those in the two lower regions the Sacrum and Coccyx are united in the adult to form two bones called the fixed vertebrae.

The vertebral Column consists of primary curves (thoracic and sacral) and secondary curves (cervical and lumbar). The curves give strength, support and balance.

Fig-5 gives the detailed description of various parts of the vertebral column which includes the cervical vertebrae, thoracic vertebrae, lumbar vertebrae, the sacrum and coccyx.

The first two cervical vertebrae are called Atlas or Axis.

The Atlas is a mere ring of bone with surface for resting the skull. The second cervical vertebra is the Axis. It has an upward projection called the odontoid-process which projects through the ring of the Atlas and forms a pivot on which the head turns from side to side. The skeletal framework of the neck consists of five cervical vertebrae which are designed with shape of flat discs placed one on the other.

The thoracic vertebrae, ribs and sternum make up the thoracic basket. The skeleton of the thorax acts as a protective cage around the heart and lungs.

There are 12 pairs of movable ribs on the sides of the chest cavity. A rib is a flattened curved bone. The first upper seven pairs of ribs are the true ribs. These ribs articulate with the thoracic vertebrae at the back and are attached directly (separately) to the sternum by coastal cartilages in front. The last five pairs of ribs are the false ribs. They also articulate with the thoracic vertebrae at the back, but all are not attached with the sternum in front. The 8th, 9th and 10th pairs of ribs on each side are attached with the cartilages of the rib just above to it and are joined to the sternum indirectly. The 11th and 12th pairs are free in front and do not attach to the sternum. They are called the floating ribs.

the upper manubrium, the middle body gladiolus and the lower small cartilaginous xiphoid process. The collar bone articulate with the manubrium of the sternum. 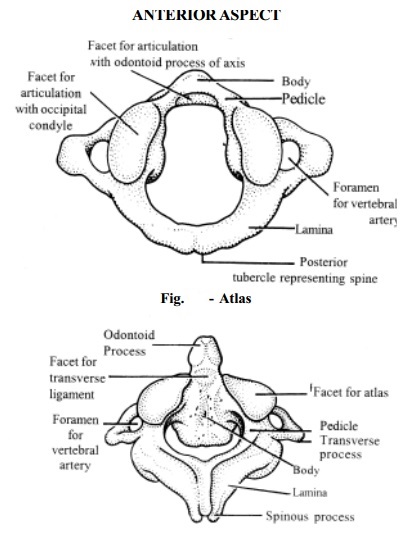