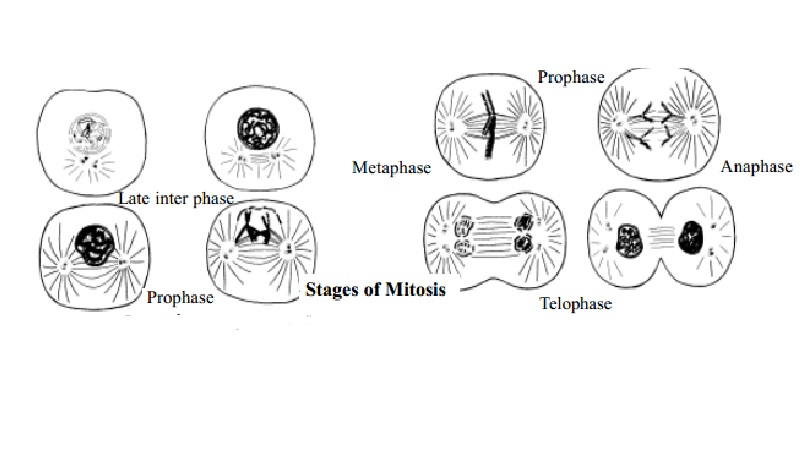 Each human cell contains 46 chromosomes arranged in 23 pairs. In general, the genes in the two chromosomes of each pair are almost identical with each other, except for the sex chromosomes.

The process by which the cell splits into two new cells is called mitosis. Mitosis begins once the DNA has been duplicated and each chromosome has split to form two new chromosomes.

Mitosis takes place in a series of consecutive stages beginning from prophase, metaphase, anaphase and telophase.

Prophase : In this stage the chromatin material of nucleus gets condensed. Chromosomes can be seen each made up of 2chromatids joined at the centromere. Centrioles, which are small cylindrical bodies, lie in the cytoplasm and move away from each other to the opposite poles of the cell. Microtubules, which are thick protein filaments, form a spindle between the two centrioles and radiate to form astral rays. The nucleoli and nuclear membrane disappear.

Metaphase : During this phase the chromosomes are pulled by the attached microtubules to the center of the cell lining up in the equatorial plane.

This is the process of cell division that occurs in the reproductive cells, i.e. ova and spermatozoa. In meiosis the chromosomes do not replicate as they do in mitosis. Instead, the pairs of chromosomes separate and one from each pair moves to the opposite poles of the parent cell. When it divides each of the daughter cells has only 23 chromosomes i.e. half the number of chromosomes or haploid number. During fertilization of the ovum with the spermatozoa, the resultant zygote will have the full complement of 46 chromosomes, half from the father and half from the mother.