Structure and Types of a Neuron 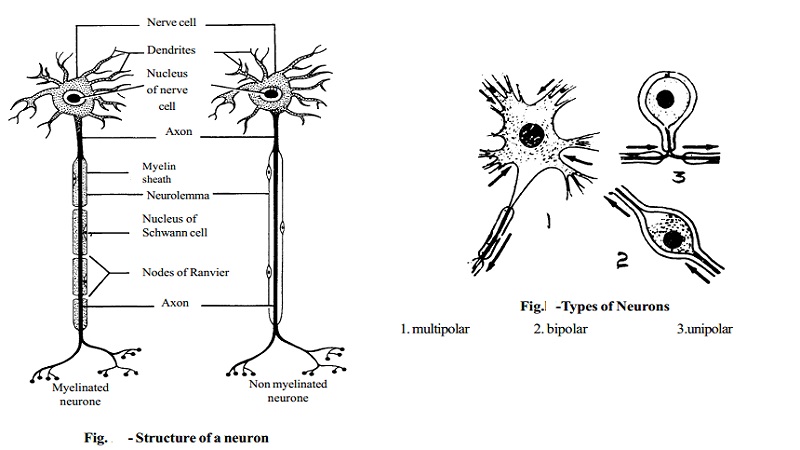 The nervous system consists of a vast number of units called neurons which are supported by a special type of connective tissue called neuroglia. Neurons are commonly referred to as 'nerves'.

The nervous system consists of a vast number of units called neurons which are supported by a special type of connective tissuecalled neuroglia. Neurons are commonly referred to as 'nerves'.

Structure of a neuron.

The structural and functional unit of the nervous system is the neuron. A nerve cell with all its processes is called a neuron. Theprocesses are collectively called the nerve fibers. They are of two parts.

Neuron consists of a central body and one or more projections. One projection which does not give out branches is long and is known as axis or axon. The branches or the projections are termed as Dendrons. There are no branches near the central axis, but towards the end of the axis there are minute branches. Sometimes there may be scattered branches at right angles to the axon. The minute branches of one axon touches the dendron of other neurons. The place where they touch each other is called 'Synapse' .

Each nerve cell consists of a nucleus. Axon is covered by an outer membrane called neurilemma. The fatty sheath or the medullary sheath is interrupted by the nodes of Ranvier. 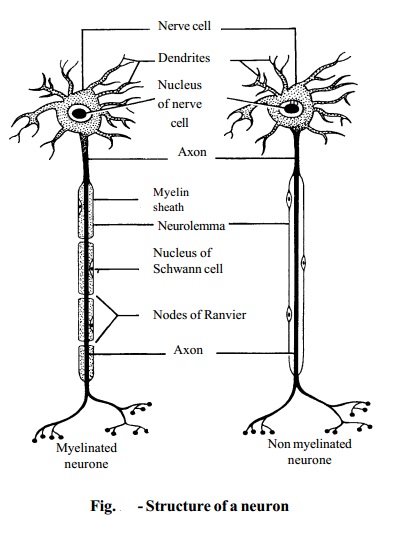 Types of Neurons : Neurons are classified according to their processes.

Apolar having no process.

Unipolar having only one process - the axon and fibre.

Bipolar - These are spindle-shaped cells possessing the axon at one pole and a dendrite at the other.

Multipolar - one axon and many dendrites. 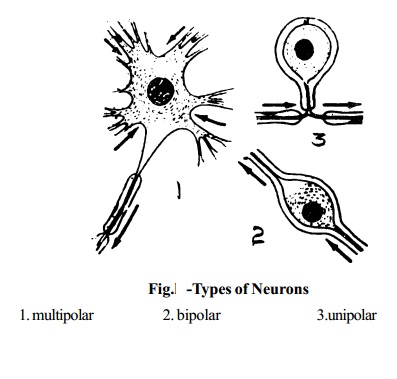