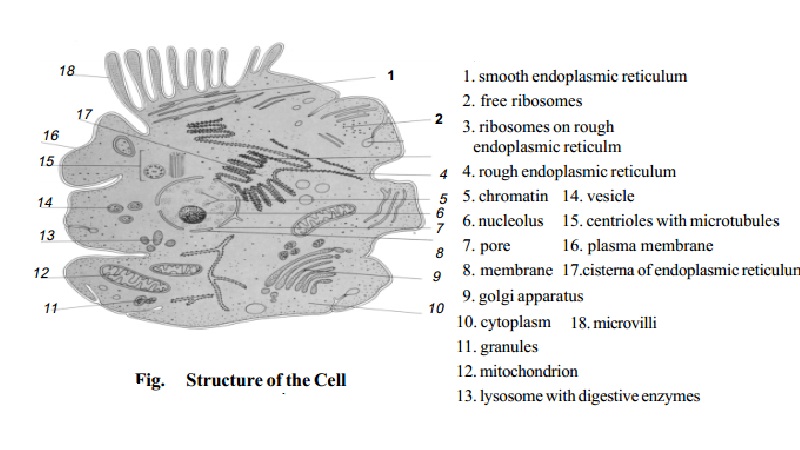 The basic functional unit of the body is the cell. The cells are the building blocks of the organs and each of these organs performs its own specialized function.

The basic functional unit of the body is the cell. The cells are the building blocks of the organs and each of these organs performs its own specialized function.

A typical cell is composed of nucleus and various organelles. The cell is filled with a colloid type of material called protoplasm. This is divided between 2 separate compartments. The nuclear compartment that contains nucleoplasm and the compartment outside the nucleus containing cytoplasm. The nucleoplasm is separated from the cytoplasm by the nuclear membrane. The cytoplasm is separated from the surrounding fluids by the cell membrane.

The protoplasm is composed mainly of 5 basic substances

electrolytes such as potassium, magnesium, phosphate, bicarbonates and small amounts of sodium and chloride,

The cell contains highly organized physical structures called organelles which are important for the functions of the cell. Someprincipal organelles of the cell are the cell membrane, nuclear membrane, endoplasmic reticulum, golgi complex, mitochondria and lysosomes.

The cell membrane is thin and elastic, composed entirely of proteins and lipids. The structure shows a central layer of lipid covered by protein layers. The protein layer contributes to the structural strength of the membrane, also acts as carrier for transporting substances through the membrane.

a) Granular ER :This type of ER contains many small granular particles called ribosomes which are attached to the outer surface. The ribosomes contain ribonucleic acid (RNA) which is necessary for protein synthesis.

b) Agranular ER : This type of ER contains no ribosomes attached to it. This is otherwise known as smooth ER. This helps in synthesizing lipid substances.

This is a specialized derivative of the endoplasmic reticulum. It is usually composed of 4 or more layers of thin vesicles. The golgi complex is very prominent in secretory cells. It's function is believed to be temporary storage and condensation of secretory substances and preparation of these substances for final secretion. It also synthesizes carbohydrates and combines it with protein to form glycoproteins. eg: mucopolysaccharide ground substance of both cartilage and bone. The golgi complex is also involved in formation of lysosomes which are important for digesting intracellular substances.

The mitochondria are composed of a double - layered membrane, an outer membrane and an inner membrane. Many infoldings of the inner membrane form shelves onto which oxidative enzymes of the cell are attached. The inner cavity of the mitochondrion is filled with a gelatinous matrix containing enzymes. Mitochondria are the 'power-house' of the cell. They provide most of the energy needed for performing cellular functions.

These are spherical organelles surrounded by a membrane. The lysosomes provide an intracellular digestive system that allows the cell to digest and remove unwanted substances and structures, especially foreign bodies such as bacteria.