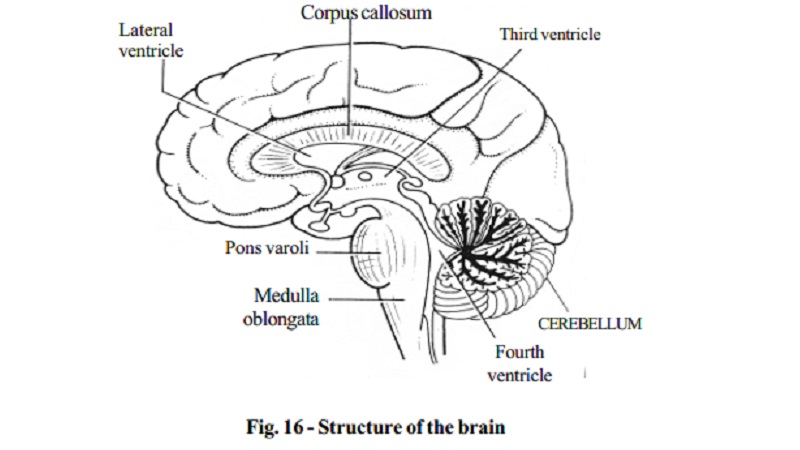 The brain and spinal cord are surrounded by the meninges. The meninges are in three layers. They are the piamater, arachnoid and the duramater. The function of the meninges is to protect the delicate nerve structure by secreting a fluid called cerebro spinal fluid (CSF).

The brain and spinal cord are surrounded by the meninges. The meninges are in three layers. They are the piamater, arachnoid and the duramater. The function of the meninges is to protect the delicate nerve structure by secreting a fluid called cerebro spinal fluid (CSF).

The cerebrospinal fluid acts as a buffer, protecting the brain and spinal cord. It also conveys nourishment to the tissues of the central nervous system. An accumulation of excess CSF leads to enlargement of the head known as hydrocephalus.

The brain lies within the cranial cavity of the skull. It develops from a single tube which shows three enlargements namely fore-brain, mid brain and hind brain. The fore brain becomes the cerebral hemispheres. The mid brain and the hind brain consists of the pons varoli, medulla oblongata and cerebellum.

The cerebrum is the largest part of the brain. It fills the front and upper portion of the cranial cavity. It consists of two large hemispheres of nerve cells (grey matter) and nerve fibers (white matter). The outer layer of grey matter is termed as the cortex. The two cerebral hemispheres are separated by a deep cleft which is united at their bases by the corpus callosum, a mass of white matter consisting of nerve fibers. Beneath this are the islands of grey matter, the basal ganglia. 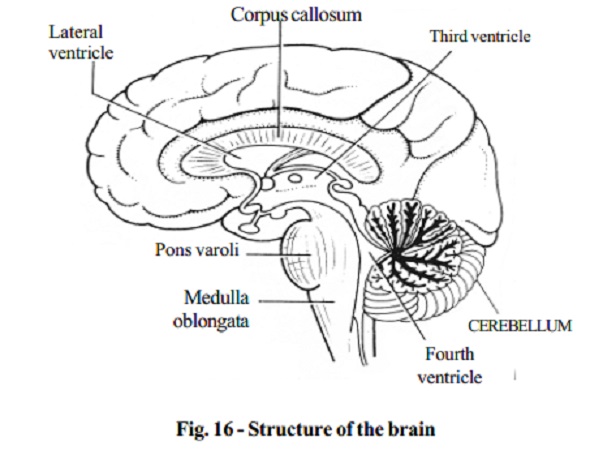 Parietal lobe : This area is sensory in function. Here sensations of touch, warmth and coolness are perceived and interpreted.

Occipital lobe : This contains the visual area for interpreting messages from the retina of the eye.

Temporal lobe : This contains the auditory centre for interpreting impulses from the ear.

The thalamus consists of two masses of nerve cells and fibers situated within the cerebral hemispheres just below the corpus callosum.

It is chiefly concerned with the reception of sensory impulses. It is the main sensory relay station of the brain. It is the centre for crude sensation. The emotional reactions are mediated through the thalamus.

It is composed of a number of group of nerve cells. This part is found under the thalamus and has got definite physiological activity. Some of them are related to autonomic nervous system. Hypothalamus also exerts control over pituitary gland of the endocrine system. Functions such as body temperature regulation, hunger and thirst are regulated by centres in the hypothalamus. It is an important reflex centre for emotional expression. It is concerned with personality of an individual. Lesions cause changes in personality and psychic disturbances.

The Brain Stem : Brain stem consists of the following parts. 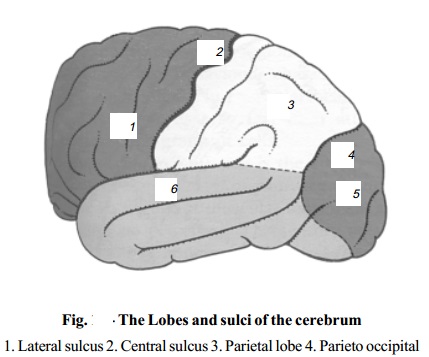 The mid brain forms the upper part of the brain stem. It contains important reflex centres for sight and hearing. It also helps in the control of balance and movements of the eye.

The Pons Varoli is the middle portion of the brain stem. It helps in the maintenance of normal rhythm of respiration.

The medulla oblongata extends from the pons varoli above and is continuous with the spinal cord below. It is about 2.5 cm long, and is shaped like a pyramid.

The outer aspect is composed of white matter-which passes between the brain and the spinal cord and grey matter lies centrally.

It contains vital centres such as :

The Cerebellum is the largest part of the hind brain. It is divided into two hemispheres, right and left and joined by vermis. The arrangement of grey and white matter is similar to that found in the cerebrum with the grey matter arranged at the surface. The cerebellum is connected to many other parts of the nervous system namely, cerebral hemisphere of the opposite side, the brain stem, the reflex centres of sight in the roof of the mid brain, the thalamus and with auditory and acoustic nerve of hearing.

Functions of the cerebellum

The function of the cerebellum is to regulate posture and maintenance of balance. It plays an important part in muscular co-ordination.