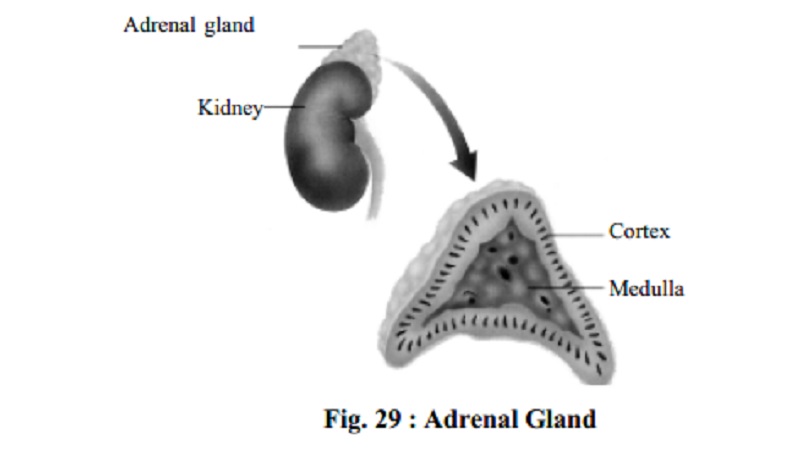 The adrenal or supra renals are two small glands each one situated above a kidney. Adrenal gland consists of two different parts each of which acts as a separate gland.

Endocrines : The glands of the body may be divided into those with an external secretion (exocrine glands) and those with an internal secretion (endocrine glands). Example of exocrine glands are the sweat, Lachrymal and mammary glands which pass their secretion along the ducts to the external surface of the body and the glands of the mouth, stomach, and intestine which pass their secretions along ducts into the alimentary tract. The endocrine or ductless gland on the other hand have no ducts or openings to the exterior.

The secretions are passed directly into the blood stream and transmitted to the tissues.

A hormone is a chemical substance produced by the endocrine glands and their overall function is to regulate the activities of various body organs and their functions. The first hormone was discovered by Bayliss in 1903.

The main endocrine glands in the body are :

It is composed of three layers. They are (a) Zona glomerulosa (outer layer) (b) Zona fasciculata (middle layer) and (c) Zona reticularis (inner layer).

The adrenal cortex secretes three hormones. They are:

Glucocorticoids : Acts as antagonists to insulin and cause increase in blood sugar.

Mineralocorticoids: Acts on sodium and potassium and help in the conservation of sodium in the body.

Functional insufficiency of the adrenal cortex and tuberculosis of the adrenal gland gives rise to Addison's disease. Its early signs are dark pigmentation of the skin, especially of the hands, neck and face, anemia, loss of energy, weakness, decreased appetite, nausea, and vomiting. Patients are very sensitive to cold and pain and susceptible to infections. This can be treated by administering the hormone in combination with a diet high in sodium and low in potassium.

Adrenal medulla secretes two hormones. They are Adrenalin and Nor-adrenaline.

Dilation of the pupils and improves visual acuity.

Increases both rate and amplitude of contraction of heart and raises the cardiac output.

Increases both rate and amplitude of respiratory movements and causes dilation of the bronchioles.

Raises the blood sugar level by means of glycogenolysis.

Dilation of the walls of intestine and the urinary bladder.