Photo electric cells and their applications

Photo electric cell or photo cell is a device which converts light energy into electrical energy. It works on the principle of photo electric effect.

Photo electric cells and their applications

Photo electric cell or photo cell is a device which converts light energy into electrical energy. It works on the principle of photo electric effect. When light is incident on the photosensitive materials, their electric properties will get affected, based on which photo cells are classified into three types.

i) Photo emissive cell: Its working depends on the electron emission from a metal cathode due to irradiation of light or other radiations.

ii) Photo voltaic cell: Here sensitive element made of semiconductor is used which generates voltage proportional to the intensity of light or other radiations.

iii) Photo conductive cell: In this, the resistance of the semiconductor changes in accordance with the radiant energy incident on it.

In this section, we discuss about photo emissive cell and its applications.

It consists of an evacuated glass or quartz bulb in which two metallic electrodes â€“ that is, a cathode and an anode are fixed as shown in Figure 7.16.

The cathode C is semi-cylindrical in shape and is coated with a photo sensitive material. The anode A is a thin rod or wire kept along the axis of the semi-cylindrical cathode. A potential difference is applied between the anode and the cathode through a galvanometer G. 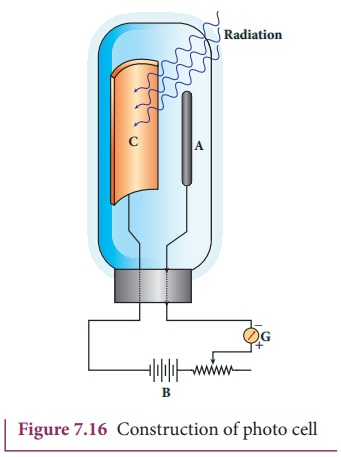 When cathode is illuminated, electrons are emitted from it. These electrons are attracted by anode and hence a current is produced which is measured by the galvanometer. For a given cathode, the magnitude of the current depends on

i) the intensity to incident radiation and

ii) the potential difference between anode and cathode.

Photo cells have many applications, especially as switches and sensors. Automatic lights that turn on when it gets dark use photocells, as well as street lights that switch on and off according to whether it is night or day.