Pathway of the Protopathic Sensibility

The thin, poorly myelinated or unmyelinated nerve fibers for the senses of pain andtemperature originate from the small neurons of the spinal ganglia (A1) (1st neuron).

Pathway of the Protopathic Sensibility

The thin, poorly myelinated or unmyelinated nerve fibers for the senses of pain andtemperature originate from the small neurons of the spinal ganglia (A1) (1st neuron). Their centripetal axons enter the spinal cord through the lateral part of the posterior root. They bifurcate in Lissauer’s tract and terminate in the dorsal border region of the substantia gelatinosa and in the poste-rior horn. The secondary fibers cross to the opposite side and ascend in the anterolateral funiculus as lateralspinothalamic tract (B2) (2nd neuron). Thetract does not form a discrete fiber bundle but consists of loosely arranged fibers that are mixed with fibers of other systems. The fibers entering at various root levels join ventromedially. Thus, the sacral fibers lie at the surface, and the cervical fibers that joined last lie in the inner part of the an-terolateral funiculus.

The input of impulses is controlled by de-scending fibers that originate in the central region, in the anterior lobe of the cerebel-lum, and in the reticular formation. These fibers terminate in the substantia gelati-nosa, a relay station in which the peripheral impulses are modulated by the excitatory or inhibitory influences of higher centers. Numerous axo-axonal synapses, which are typical for presynaptic inhibition, have been demonstrated in the substantia gelatinosa.

In the medulla oblongata, the lateral spinothalamic tract (spinal lemniscus) is lo-cated at its lateral margin above the olive and gives off numerous collaterals to the re-ticular formation. Here, too, a considerable portion of the fibers (spinoreticular tract) terminate. The reticular formation is part of the ascending activation system, the stimulation of which puts the organism into a state of alertness. Hence, the impulses transmitted via the pain pathway not only cause a conscious sensation but also in-crease the attention via the reticular forma-tion. By contrast, the pathway of the epicritic sensibility runs through the brain stem without giving off any collaterals. 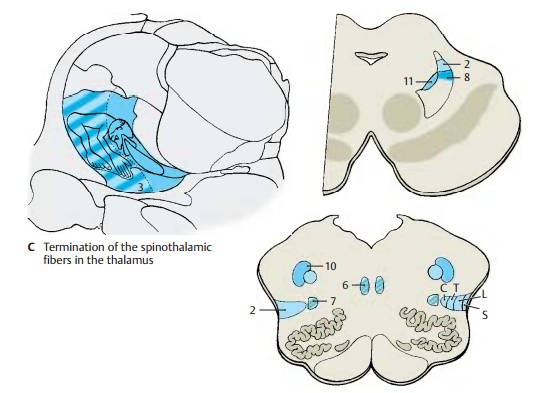 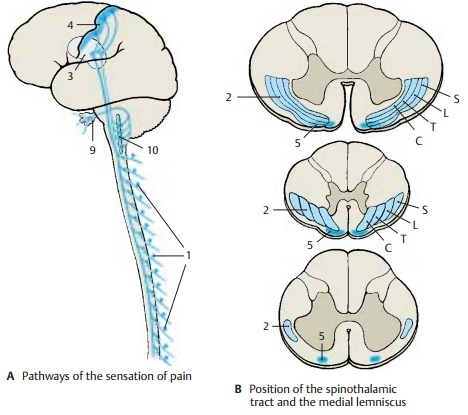 The spinothalamic fibers join the mediallemniscus in the midbrain and take a dor-solateral position. A large portion of them terminate on the cells of the ventral poste-rior nucleus of thalamus (AC3) (3rd neuron)in somatotopic organization, predomi-nantly in a ventral parvocellular region. Ter-tiary fibers extend from here to the postcen-tral region (A4). Other spinothalamic fibers terminate in other thalamic nuclei, for ex-ample, in the intralaminar nuclei.

The anterior spinothalamic tract (B5) transmits crude senses of touch and pressure. Its fibers cross from the posterior horn (2nd neuron) to the contralateral anterior funiculus. The position of the tract in the medulla oblongata is a matter of controversy. It is though to lie either medi-ally to the medial lemniscus (B6) or laterally to the olive (B7). In the pons and midbrain, the fibers join the medial lemniscus (B8) and terminate on the cells of the ventral pos-terior nucleus of thalamus (3rd neuron).