The corticospinal tract (pyramidal tract) and the corticonuclear fibers are regarded as pathways of voluntarymovements.

The corticospinal tract (pyramidal tract) and the corticonuclear fibers  are regarded as pathways of voluntarymovements. It is through them that the cor-tex controls the subcortical motor centers. The cortex can have a reducing and inhib-iting effect, but it also produces a continu-ous tonic stimulus that promotes quick, sudden movements. The mechanical and stereotyped motions controlled by the sub-cortical motor centers must be modified by the influence of pyramidal impulses in order to produce specific, fine-tuned movements.

The fibers of the corticospinal tract origi-nate in the precentral areas 4 (A1) and 6 (A2), in regions of the parietal lobe (areas 3, 1, and 2), and in the second sensorimotor area (area 40) . Roughly two-thirds stem from the precen-tral area, and one-third from the parietal lobe. Only about 60% of the fibers are myeli-nated; the other 40% are unmyelinated. The thick fibers of Betz’s giant pyramidal cells in area 4 account for only 2 – 3% of the myelinated fibers. All other fibers stem from smaller pyramidal cells. 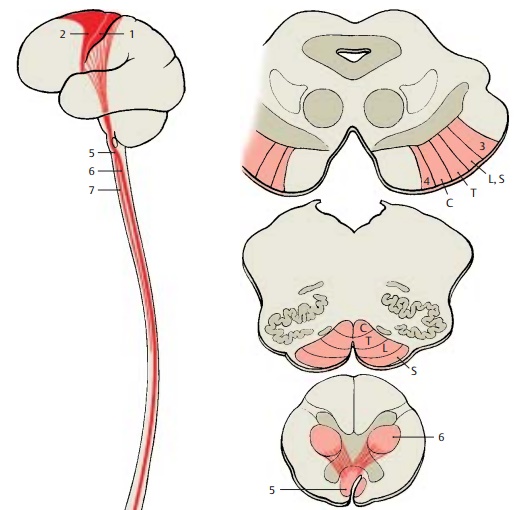 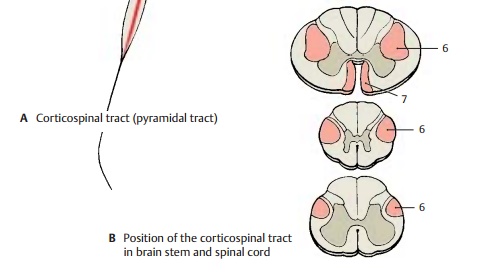 The fibers of the pyramidal tract pass through the internal capsule. At the transition to the midbrain, they ap-proach the base of the brain and together with the corticopontine tracts form the cerebral peduncles. The corticospinal tract fibers occupy the central part, and the fibers from the parietal cortex occupy the most lateral position (B3). They are followed by the corticospinal tracts for the lower limb (L, S), trunk (T), and upper limb (C), and finally the corticonuclear fibers for the facial region (B4). When passing through the pons, the fiber tracts rotate so that the corticonu-clear fibers now lie dorsally, followed by the bundles terminating in the cervical, thoracic, lumbar, and sacral regions, respec-tively. In the medulla oblongata, the corti-conuclear fibers terminate on the cranial nerve nuclei. Most of the fibers.

The majority of corticospinal tract fibers terminate on interneurons in the interme-diate zone between anterior and posterior horns. Only a small portion reaches the motor neurons of the anterior horn, predominantly those supplying the distal segments of the limbs, which are under the special control of the corticospi-nal tract. Impulses from the corticospinal tract activate neurons that innervate the flexor muscles but inhibit neurons that innervate the extensor muscles.

Fibers originating from the parietal lobe terminate in the dorsal column nuclei (gracilenucleus and cuneate nucleus) and in the sub-stantia gelatinosa of the posterior horn.They regulate the input of sensory impulses. Hence, the corticospinal tract is not a uni-form motor pathway but contains descending systems of different functions.