Apart from the precentral area and corticospinal (pyramidal) tract, numerous other cortical areas and pathways control motor activity. They are collectively known as the extrapyramidal motor system. It is phylo-genetically older than the corticospinal tract and, unlike it, consists of chains of multisynaptic neurons. Originally, the term referred to a group of nuclei characterized by its high iron content: neostriatum (puta-men [A1] and caudate nucleus [A2]), pal-lidum (A3), subthalamic nucleus (A4), red nucleus (A5), and substantia nigra (A6) (ex-trapyramidal motor system in the narrower sense). This group of nuclei is connected toother centers that are important for motor activity; however, these are integration cen-ters rather than motor nuclei: cerebellum(A7), thalamic nuclei (A8), reticular forma-tion, vestibular nuclei (A9), and some corti-cal areas. They are collectively known as the extrapyramidal system in the broader sense. 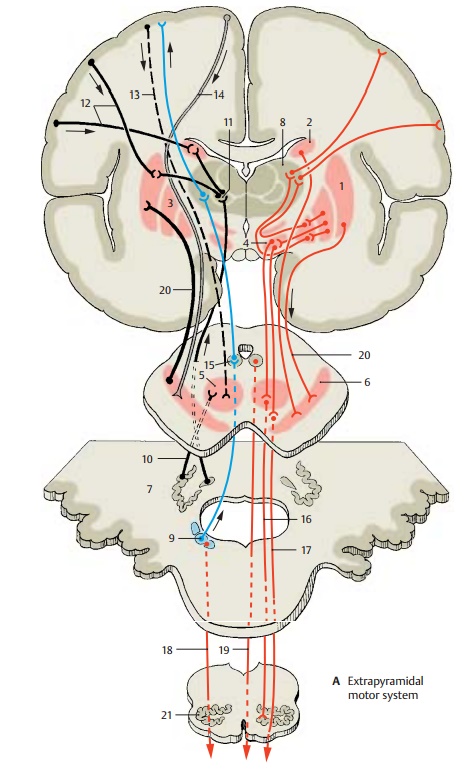 When one limb is moved voluntarily, muscle groups of the other limbs and of the trunk are simultaneously activated so that balance and posture are maintained under the changed static conditions and the move-ment can be completed smoothly. The ac-companying muscle activities, which are often nothing more than the increased ten-sion or relaxation of certain muscle groups, are carried out involuntarily and are not experienced consciously. Without them, however, coordinated movement would be impossible. Such unconscious motions in-clude associated movements (synkinesis) (such as arm movements while walking) as well as many movements that have been practiced for a long time and thus occur au-tomatically. They are all under the control of the extrapyramidal system; this may be compared to a servomechanism that sup-ports all voluntary movements in an auto-nomic way and without reaching the level of consciousness.

Afferent pathways reach the system throughthe cerebellum. Cerebellar tracts terminate in the red nucleus (cerebellorubral tract) (A10) and in the centromedian nucleus of thalamus (A11) from which fibers extend to the striatum. Cortical fibers run to the stri-atum (A12), to the red nucleus (A13), and to the substantia nigra (A14). Vestibular fibers terminate in the interstitial nucleus of Cajal (A15).

The efferent pathway of the system is the cen-tral tegmental tract (A16). Otherdescending pathways are:

The extrapyramidal centers are intercon-nected by numerous neuronal circuits to en-sure mutual control and adjustment. There are two-way connections between pallidum and subthalamic nucleus, and between stri-atum and substantia nigra (A20). A large neuronal circuit runs from the cerebellum through the centromedian nucleus of thalamus to the striatum and from there via pallidum, red nucleus, and olive (A21) back to the cerebellum. Other functional circuits are formed by cortical fibers to the striatum, with a recurrent circuit passing through pallidum, ventral anterior nucleus and ven-tral lateral nucleus of thalamus, and back to the cortex.

The frontal and occipital visual fields together with the regions of parietal and temporal lobes, from where complex massive movements can be elic-ited by a strong electrical current, are known as extrapyramidal cortical fields. However, the inclusion of cortical fields in the extrapyramidal system is controversial, even though numerous corticostriatal con-nections have been demonstrated (A12).