The skin is endowed with a large number of end organs that differ in their structures and their sensitivities to specific stimuli. 1. Free nerve endings 2. Encapsulated nerve endings 3. Transitional forms between these twotypes

The skin is endowed with a large number of end organs that differ in their structures and their sensitivities to specific stimuli. Since the assignment of different sensory qualities to specific end organs is a matter of con-troversy, the nerve endings are classified ac-cording to morphological aspects:

!   Transitional forms between these twotypes

Free nerve endings are found in almost every tissue of the body. In the skin, they reach into the lower layers of the epidermis (stratum germinativum). At the end of their terminal branches, the axons send nodular or fingerlike evaginations through gaps in the Schwann cell sheath. These evagina-tions are covered only by the basement membrane and represent the receptor seg-ments of free nerve endings to which the sensations of pain and cold are attributed.

Delicate nerve fibers encircle the hair fol-licles, and their terminal segments ascend ordescend parallel to the hair shaft (A). The re-ceptor terminals lose their myelin sheath and are enclosed between two Schwann cells (B1) (sandwich arrangement), which leave a cleft along the entire terminal seg-ment (B2). Through this cleft the axon ter-minal reaches the surface where it is covered only by the basement membrane. The nerve endings (C3) are radially arranged around the hair follicle (C4) in such a way that the sensory clefts face the follicle. Every movement of the hair causes mechanical stimulation of the nerve endings (red ar-rows in C), which is perceived as touch.Also  associated  with  hair  follicles  are

Merkel’s touch cells (F5). These are large,clear epithelial cells that lie between the basal cells (F6) of the outer root sheath and send out fingerlike processes (F7) into their surroundings. Deformation of these cellsthrough movement of the hair results in stimulation of the associated nerve fiber (F8). The nerve fiber loses its myelin sheath as it penetrates the basement membrane (F9) and sends branches to several tactile cells. The terminal segment widens into a tactile meniscus (F10) and forms synapselikemembrane contacts (F11) with the Merkel cell. 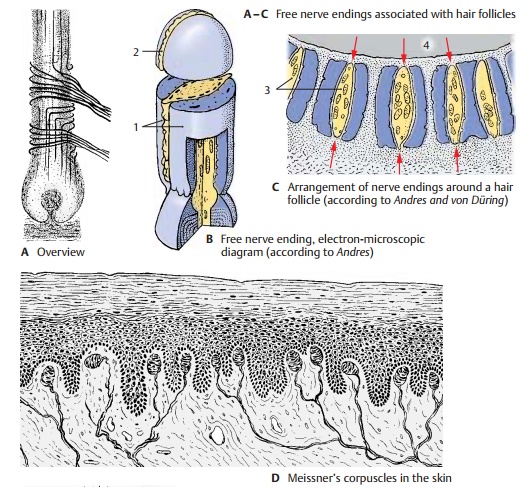 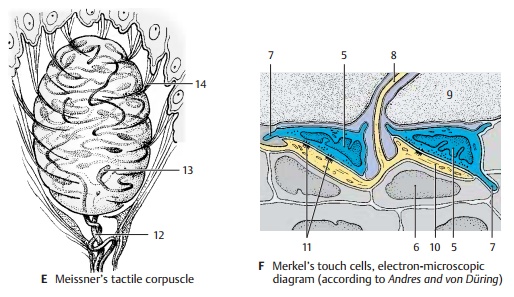 Meissner’s tactile corpuscles (D, E) lie inthe papillae of the dermis. They are most densely located in the palmar and plantar surfaces of hands and feet. Their densities at the distal ends, or digital pulps (especially at the digital pulp of the index finger), are far higher than at the rest of the surface. This pattern of distribution is an indication of how important these corpuscles are for delicate touch sensation.

The tactile corpuscles (E) are ovoid struc-tures that consist of stacks of flattened cells (probably Schwann cells) and are sur-rounded by a thin capsule. One or more axons (E12) enter the corpuscle from below, lose their myelin sheath, and run in convo-luted spirals between the stacked cells. The club-shaped swellings (E13) of the axons represent the receptor terminals. Collagen fiber bundles (E14) radiate into the capsule of the tactile corpuscle. They are continuous with the tonofibrils in the epidermal cells and transmit any mechanical deformation of the skin surface to the receptor terminals.

(A – C), are relatively large, up to 4 mm long bodies located below the skin in the subcu-taneous tissue. They are also found in the periosteum, in the vicinity of joints, and at the surface of tendons and fasciae. They consist of a large number of concentric lamellae which are arranged in three layers:

The capsule (A1) is formed by a few densely packed lamellae that are reinforced by con-nective-tissue fibers. The lamellar outer core (AC2) consists of closed annular proto-plasmic lamellae (B3) that are separated from each other by noncommunicating, fluid-filled spaces. Capsule and lamellar outer core are considered to be differentia-tion products of the perineurium. The tightly packed layers of the fluid-free innercore (A – C4) are formed by Schwann cells.The inner core consists of two symmetrical stacks of semiannular lamellae (B5) that are separated by a radial cleft. The protoplasmic lamellae are arranged alternately in such a way that two juxtaposed lamellae stem from two different cells. The nerve fiber (AC6) enters the lamellar corpuscle at the lower pole and runs in the center of the inner core to the end of the core. Upon en-tering the inner core, the axon loses its my-elin sheath (A7), and it terminates with a few club-shaped swellings. The unmyeli-nated segment of the axon (A – C8) in the inner core represents the receptor portion. Perineurium (A9) (see p. 41, CD9).

Pacini’s corpuscles are not only pressure re-ceptors but, above all, vibration receptors. Electrical recordings from isolated cor-puscles have demonstrated that they are stimulated by both deformation and decompression, but not by continuous pres-sure. In experiments, these highly sensitive vibration receptors registered, for example,the vibration of the floor caused by some-one passing by.

There are numerous different transitional forms between free and encapsulated nerve endings. In all of them the nerve fibers ramify into terminal complexes in which the delicate axonal branches form glomeruli or treelike ramifications and terminate with club-shaped swellings. These formations are enclosed in a more or less prominent connective tissue capsule. They include the ovoid bulboid corpuscles (Krause’s end bulbs) in the papillae of the dermis, the roundGolgi – Mazzoni corpuscles, and the elon-gated Ruffini’s corpuscles (D) in the subcu-taneous tissue. Such structures are found not only in the skin but also in the mucosa, in joint capsules, in the coverings of inner organs, and in the adventitial coat of large arteries. The most diverse forms are found in the genitals, especially in glans (E) and clitoris. 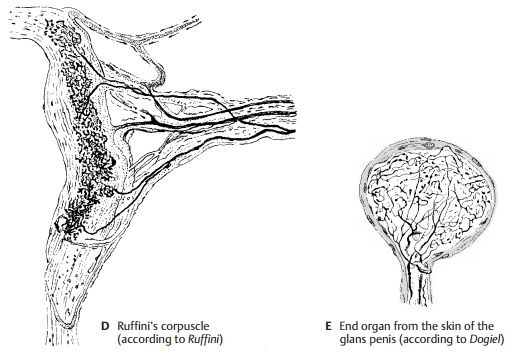 The assignment of the different sensory qualities to specific end organs is a matter of controversy. It is, however, recognized that the corpuscular end organs are important mechanoreceptors and that free nerve endings are pain receptors. How the sensa-tion of heat and cold is brought about has not yet been elucidated. However, the different structures of the receptors suggest that there is selectivity with respect to the type of stimulus processed.