Different taste sensations are registered by the taste buds which, together with the ol-factory epithelium, constitute the chemore-ceptors.

Different taste sensations are registered by the taste buds which, together with the ol-factory epithelium, constitute the chemore-ceptors. Taste buds, or gustatory receptors (B – D1; E), are found in large numbers in the lateral walls of the vallate papillae (AB2), and in moderate numbers in thefungiformpapillae and in the foliate papillae. In addi-tion, there are isolated taste buds in the soft palate, in the posterior pharyngeal wall, and in the epiglottis.

The base of the taste bud is innervated by thin, myelinated nerve fibers (D5) that branch and supply the adjacent epithelium as well. We therefore distinguish between extragemmal and intragemmal nerve fibers.Upon entering the taste bud, the intragem-mal nerve fibers (usually 2 – 3) lose their Schwann cell sheath and arborize. Accord-ing to electron microscopic studies, the deli-cate nerve endings lie between the sensory cells and invaginate these so deeply that they appear to be intracellular. When a taste nerve is severed, the taste buds degenerate. Regeneration of the nerve induces the for-mation of new taste buds in the epithelium of the tongue.

Electron micrographs show the long neck (E6) of the sensory cell extending into the taste pore and ending with a dense border of microvilli (E7). This is the receptor por-tion of the cell. The microvilli considerably enlarge the cell surface coming into contact with the substances to be tasted. The taste bud contains three different cell types that represent different developmental stages of the sensory cells: the dark supporting cells (E8), which contain numerous secretory granules, the clear taste cells (E9) without granules, and the small basal cells (E10). The floor of the taste pore as well as the clefts between the receptor portions of the cells contain a mucous substance that is probably secreted by the taste cells.

There are different theories as to how a gus-tatory stimulus is produced. Molecules that trigger a specific taste sensation bind to specific receptor sites on the sensory cell membrane. These sites recognize the con-figuration of the molecule and cause a change in membrane potential, which fi-nally leads to excitation of the associated axon terminal. 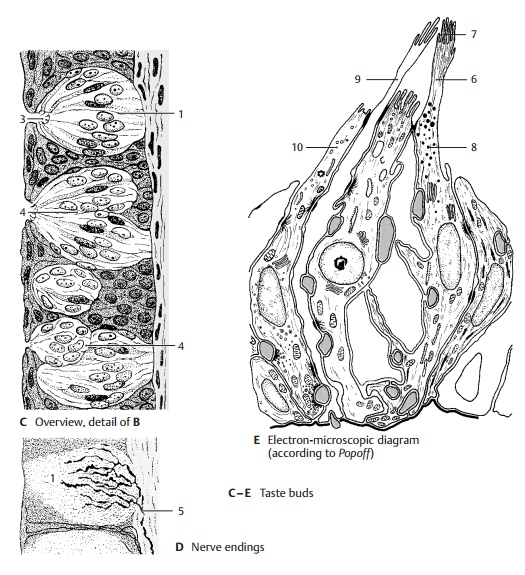 The four basic taste sensations (sweet, sour, salty, and bitter) are not equally well per-ceived by all taste buds. Some buds react only to sweet or only to sour, while others register two or three qualities without ex-hibiting morphological differences. The perception of individual qualities on the surface of the tongue is differentially dis-tributed. Sour is perceived especially at the lateral margins of the tongue (A1), salty at the margins and the tip (A2),bitter at the base of the tongue (A3), and sweet at the tip of the tongue (A4). 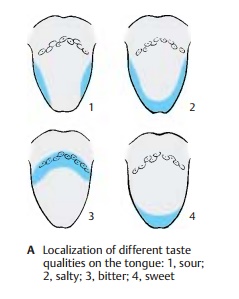 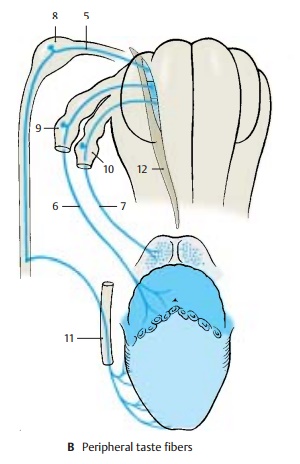 The secondary taste fibers originate from the solitary nuclear complex. Their exact course in the brain stem is not known. It is assumed that the majority of fibers cross to the op-posite side as arcuate fibers and join the me-dial lemniscus (C13). They are thought to oc-cupy the most medially located part in the lemniscus. The secondary taste fibers termi-nate in the medial part of the ventral poste-rior nucleus of thalamus (C14). From here,ter-tiary taste fibers project to a cortical area onthe ventral aspect of the parietal operculum (C15), below the postcentral region. The ter-minals in thalamus and cerebral cortex have been confirmed by experiments in monkeys. In humans, a loss of taste percep-tion on the contralateral half of the tongue has been observed when these regions are destroyed by disease.

Collaterals extend from the neurons of the solitary nuclear complex to the parasympa-thetic salivatory nuclei. This way, taste sen-sation can cause reflex secretion of saliva. Collaterals running to the posterior nucleus of the vagus nerve form the connection by which taste stimuli produce reflexsecretionof gastric juice.